Volleyball heads to UAA Round Robin with upsets on their minds 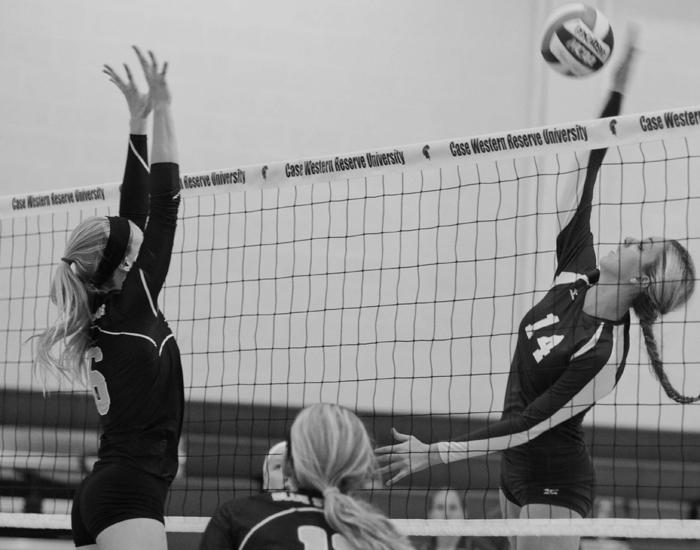 The Case Western Reserve University volleyball team will take a quick trip east to Pittsburgh, Pa. this weekend where it will compete in the second University Athletic Association Round Robin. The Spartans (16-6, 2-1) are off to one of the best starts in program history and will face a number of close matches at Carnegie Mellon University.

Case is coming off a 2-2 finish last weekend at the Blue Devil Invitational hosted by SUNY Fredonia. The Spartans dominated in their two wins, winning in straight sets over SUNY Fredonia and University of Pittsburgh at Bradford while being beaten in the fifth set of each of their losses. Despite an early deficit, the women would battle back against Buffalo State University 25-17, 27-25, 20-25, 14-25 before losing in the final set 15-12. Case lost to Nazareth College 25-20, 23-25, 25-19, 22-25 and 15-10 on the Saturday.

The Spartans will open the weekend with a match against UAA bottom-dweller Carnegie Mellon (10-12, 0-3). The Tartans finished seventh last year in the conference and have struggled against the UAA’s top four squads. The game will pose an important match for Case to begin gathering momentum, as the difficulty of the subsequent matches will escalate dramatically. The Spartans have won the past three matches against the host Tartans and should continue that streak.

Their second match of the weekend will come against No. 6 Emory University. The Eagles (19-3, 3-0), a perennial conference and national championship contender, will pose the Spartans’ most difficult match of the weekend. Emory has had Case’s number in the past few years as the top 10 team has been notoriously difficult to upset in the UAA. If the Spartans are able to escape the match with a set or two, they will be in good shape going into the final day of conference play.

Sunday will bring the final day of conference competition for the Spartans before the UAA Championship tournament. Case will match up against fifth-place New York University (12-7. 1-2). The Violets have been a noticeable force in the UAA in the past decade, frequenting the AVCA’s top 25 poll; however, the past few years have seen the Spartans jump them in the UAA as they have fallen out of the national picture. The Violets finished third in UAA in 2010 and fell to sixth last year as the Spartans defeated them twice, 3-1 in the regular season and 3-2 in the first match of the UAA Championship.

The final match of the weekend will be the toughest of the regular season as the Spartans will match up with No. 12 University of Chicago (16-6, 2-1). The Spartans and Maroons have had a number of tough battles in the past few seasons, as the current squad is well aware. Chicago, who is also a familiar face in the AVCA top 25, knows their ranking means nothing against the Spartans.

In the past four years, the two teams have matched up seven times, most notably twice in each team’s final game of the UAA Championship. In all but one of the seven meetings, the match has been decided in the fifth set. The only exception is in 2009, the only year the teams played just once, when Chicago won in straight sets. Since 2008, Chicago owns a 4-3 advantage in the series including a 3-1 streak in the past two years.

That final match will likely decide the third place position in the UAA tournament, barring any upsets. Although the two teams will likely face in the tournament again, a win will give the Spartans the confidence they need to sweep the season series.