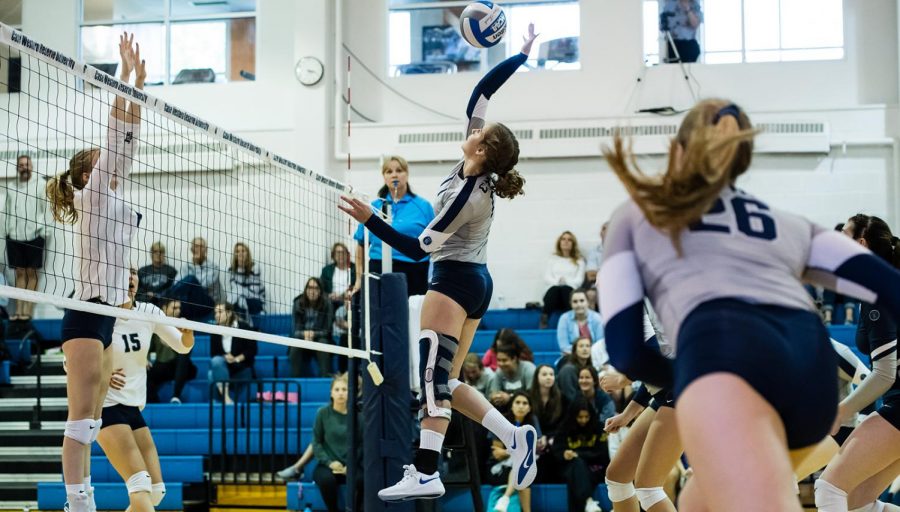 Volleyball eaked out a 25-23 victory against Mount Union on Sept. 11 Courtesy of CWRU Athletics

It was a tough week for the Case Western Reserve University women’s volleyball team.

In their last five contests, the Spartans lost four, one against University of Mount Union and three at the DoubleTree Invitational at Carnegie Mellon University.

The match against Mount Union was one of the team’s most competitive this season. The Purple Raiders took two of the first three sets, putting the Spartans’ backs against the wall, but CWRU squeaked out a 25-23 victory to send the game to a winner-take-all fifth set. Unfortunately, Mount Union proved to be barely too much, winning the set 16-14.

CWRU spent Sept. 13 and 14 in Pittsburgh for the Carnegie Mellon Invitational. They opened the weekend against Susquehanna University, losing the next three sets after winning the first 26-24. The Spartans’ serve receive struggled in this match, much like it had earlier in the season, with 11 serve-receive errors. Fourth-year middle hitter Haley Sims led the team with 11 kills, while fourth-year outside hitter Karley King and first-year right side hitter Gianna Lambert each had ten.

The story was much of the same in the match against the University of Scranton. CWRU won the first two sets, but just couldn’t hold the momentum and lost in five sets. Kaminski had a team-high 13 kills, and fourth-year outside hitter Brianna Lemon had 11 kills and nine digs. Third-year libero Anna Jaskoviak added 23 digs.

The Spartans finally got in the win column with the final game of the weekend. They beat Washington & Jefferson College 25-10, 25-8 and 25-18. Ellis led the team with 16 assists. Offensively, the team had a solid .323 kill percentage, and on defense CWRU had no serve-receive errors.

After the weekend, Head Coach Karen Farrell believes that the team should work on improving their consistency, “I think we continue to play very well in spurts but have trouble maintaining consistency throughout the entire match. We give up points in runs by compounding unforced errors and find ourselves in a hole trying desperately to dig back into sets,” said Farrell.

The Spartans will begin the UAA action this weekend on Sept. 21 and 22 at Brandeis University.