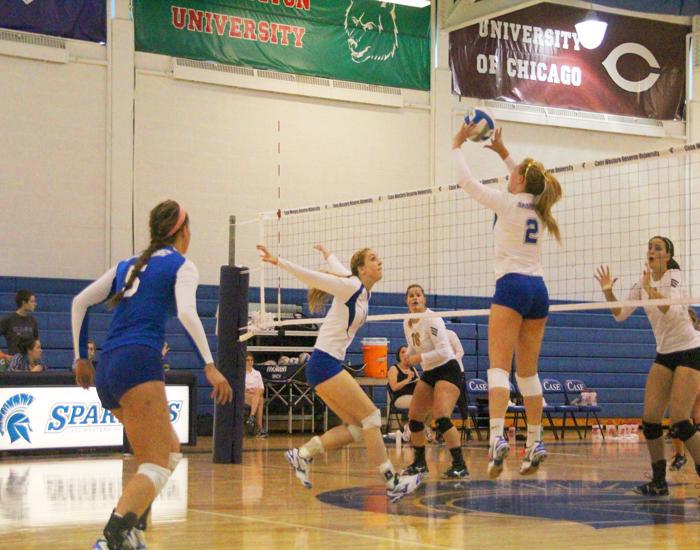 Despite a pair of losses last week, the Case Western Reserve University volleyball team continues on its best start in program history. The Spartans (11-2) finished 2-1 on the weekend at the Allegheny Gator Invitational after dropping a tough match to No. 22 University of Mount Union last Wednesday, Sept. 12.

The night wasn’t a complete letdown, as senior setter Breana Freeman set the program record for assists. Freeman entered the night with 2903 assists for her career, seven behind former record holder Susan Eungard (1996-2000). With 38 assists in the match, Freeman blew past the record and finished with 2941 with over half the season still remaining.

The Spartans rebounded from the loss with a pair of resounding wins at Allegheny College’s annual invite at the David V. Wise Center.

The first match for the Spartans came against the host Gators who the Spartans swept soundly, 3-0, by scores of 25-7, 25-16, and 25-14. Paced by sophomore middle hitter Natalie Southard, the Spartans attack was unstoppable. Southard added 10 assists on a .562 hitting percentage while the team finished with an average of .322, over 50 percent higher than their season average of .216.

The Spartans then played Frostburg State University, which came into the game winless and left the same way. The Spartans came out to impressive 25-9, 25-8 victories in the first few sets before the reserves finished off the Bobcats 25-22 in the third.

With two opening day wins and the chance to take home their third tournament win in three tries, the women faced off against Penn State Behrend before taking on Thiel College.

The Spartans topped the Behrend Lions in four sets for the 3-1 victory. The Spartans took the first two sets 25-19 and 25- 18, before falling in the third 22-25. The Spartans then closed out the match, thanks to freshman outside hitter Carolyn Bogart’s team high 15 kills with a 25-12 win. Southard added 13 kills of her own while Freeman and freshman Robyn Marks combined for 52 assists.

Case had their work cut out for them in the final match, playing in a number of gut wrenching sets against Thiel. The Spartans took the opening set in extra time 24-26, but the Tomcats would bounce right back, winning the second 27-25. Thiel continued its rally, winning 25-21 in the third before Case tied up the match in the penultimate set, 19-25.

With the tournament title on the line, the Tomcats were able to close out the Spartans by a narrow two-point margin in the tiebreaker, 15-13.

Bogart once again led the Spartans with a career high 21 kills. The performance earned her the honor of being named to the All-Tournament Team.

Southard continued her impressive season as the reigning UAA Offensive Athlete of the Week with 16 kills against Thiel. Freeman finished with 45 assists while senior libero Rachel Gulasey led a strong defensive effort with 27 digs.

The Spartans will look to continue their best start in program history when they travel to the College of Wooster on tonight, Friday, Sept. 21 at 7 p.m. The Spartans already defeated the Fighting Scots once on their home turf at the French Memorial Tournament 3-0, so Wooster will look to get its revenge.

Case will also travel to Baldwin Wallace College next week on Tuesday, Sept. 25 to face the Yellow Jackets at 7 p.m.