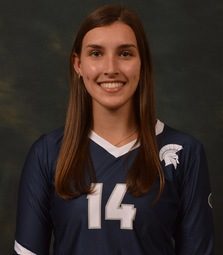 UAA Athlete of the Week Alyssa Blessinger, a second-year defensive specialist, consistently led the team in digs throughout the tournament.

Over the past week, the Case Western Reserve University volleyball team hosted the CWRU Tournament last weekend and played on the road against the University of Mount Union in Alliance, Ohio on Wednesday, splitting the games 1-3 for an overall record of 2-3.

The CWRU Tournament spanned from Friday evening to Saturday afternoon and featured the Albion College Britons, the Bethany College Bison, the Earlham College Quakers and the John Carroll University Blue Streaks in addition to our very own Spartans.

Coming into the tournament, the overarching team goal was to “[build] upon our Wednesday match against Oberlin and [to continue] to improve our level of play,” according to second-year middle blocker Jennifer Ngo.

Given that this was the first major tournament after more than a year without competitive matches and that the team members were still getting used to each other’s playing styles, another goal for the team was to get a better understanding of their identity and solidify their camaraderie.

“[We wanted to] find out our strengths and weaknesses and find a good basis for communication and trust,” said first-year outside hitter Rea Marfatia. “More than half the team experienced their first collegiate matches this [past] week, so it was important to establish a supportive and comfortable environment.”

The Spartans opened the tournament with a tight match against Albion College last Friday, eventually losing the game 2-3 sets. Behind multiple kills from Ngo and third-year outside hitter Gianna Lambert, CWRU got off to an explosive start, leading Albion 12-5. Though CWRU’s momentum carried them through the set, Albion kept clawing back. The commanding seven-point lead dwindled to two as CWRU took the first set 25-23.

The next three sets were more heavily contested, with the largest lead not exceeding six points. Albion took the second and third sets by tight margins again, winning 25-23 in the second set and 27-25 in the third set. Being down 1-2, CWRU stormed back in the fourth set, consistently maintaining at least a three-point lead throughout to tie the match 2-2.

In the deciding set, the momentum was on the Spartans’ side as they ran out to an 11-4 lead. Unfortunately, several communication mistakes and late rotations allowed Albion to go on a nine-point run and take a two-point lead. CWRU’s attempt to regain their lead was futile, and Albion took the set 15-12 and the match 3-2. With this loss, CWRU evened their record to 1-1 overall. Ngo and Lambert tallied 20 and 18 kills, respectively, while third-year setter Sara Rogers recorded 51 assists.

On Saturday morning, the Spartans came out with vengeance and crushed Bethany College 3-0. CWRU sailed to a 25-9 victory in the first set behind multiple kills from Marfatia and attack errors forced by first-year right side hitter Chloe Maciejewski.

Bethany put up more of a fight in the second set and managed to take an early 6-4 lead. The Spartans, however, came roaring back to retake the lead and took the set 25-19. CWRU finished off Bethany College in the third set, winning 25-15 behind dominant performances from all around the team. Lambert and Marfatia contributed seven kills each in the match while Rogers totaled 25 assists. On the defensive side, second-year libero Alyssa Blessinger led the team with 13 digs, and Ngo registered six blocks.

The Spartans looked to close out their tournament on a high note against Earlham College on Saturday afternoon. In the opening set, the momentum was on Earlham’s side as CWRU’s incessant mistakes fueled Earlham’s multiple four-point runs. Between multiple missed spikes, blocking errors and defensive miscommunications, CWRU wasted every opportunity to bounce back. Earlham took the first set 25-16.

The second set was a different story. Though Earlham jumped out to a quick three-point lead, CWRU slowly crawled back to even it 5-5. There was clearly a different energy on the court. The rallies were much longer and more contested in this set compared to the choppy ones in the previous one. The Spartans were not ready to capitulate.

Though CWRU retained a near two-point lead for most of the match, Earlham remained close behind. Following three straight errors, Earlham pounced in front 19-17 over the Spartans. Coming into the final stretch, Earlham and CWRU kept trading points. Earlham scored two quick points off short volleys to tie the game 23-23. Remaining poised, Ngo and Lambert went for back-to-back kills to take the set 25-23, tying the match 1-1.

“We played with conviction and grit,” Marfatia said of the team’s play throughout these intense matches. “We found ways to develop good team chemistry and execute important plays, [specifically] setter-hitter connections and defense.”

The third set was almost a replica of the second one, and the score was constantly neck and neck. When it seemed one team was gaining momentum, the other team would attack right back. Even though Earlham maintained the lead for most of the set, it was the most competitive set of the game, consisting of four ties and two lead changes.

At the very end of the match, Earlham reached set point following two straight kills to get up 24-22. The Spartans showed their brilliant resilience and forced two attack errors to close the gap and tie it 24-24. Unfortunately for CWRU, Earlham scored two straight points with powerful strikes to win the set 26-24 and take the lead in sets 2-1.

The Spartans got off to a better start in the fourth set and were able to fend off Earlham’s quick hits. However, it was not enough to win the set. Earlham forced CWRU back into their early match lapses, resulting in multiple errors off of serves and strikes. CWRU tried to come back on multiple occasions, but Earlham had an answer every time. Earlham took the set 25-22 and won the game 3-1, giving CWRU a 1-2 record for the hometown tournament.

“Being a young team, finding the stamina and focus to close out a set was a key component we struggled with,” added Marfatia. “We would also like to improve our consistency throughout the match. Albion and Earlham both played gritty defense and we would like to consistently play at a level where we can be efficient.”

The Spartans concluded their matches for the week against University of Mount Union on Wednesday night. The Spartans were looking to improve to a winning record from 2-2 thus far, while Mount Union came to the match aiming to build upon their perfect 4-0 start to the season.

CWRU survived a five-point run from Mount Union and built a 19-17 lead. Mount Union, however, strung together six straight points and concluded the set with a kill to win it 25-21.

Mount Union’s first set success carried through in the second set. After getting off to a 9-3 lead, Mount Union never looked back. The Spartans attempted a couple of runs throughout the set but it was never enough to overcome Mount Union’s 25-14 stranglehold. With the victory, Mount Union’s set lead increased to 2-0.

The Spartans showed a little more life in the third set and kept Mount Union’s lead from burgeoning early on. Just as CWRU cut the lead to 15-16, Mount Union went on another one of their game-changing runs. Scoring seven of the last eight points of the set, Mount Union sealed the game and extended their win streak to five games.

CWRU dropped to a 2-3 record with the loss. Lambert led the team with seven kills while Maciejewski turned in six kills, hitting at a team-best rate of .500. Blessinger added 15 digs while Rogers totaled 26 assists.