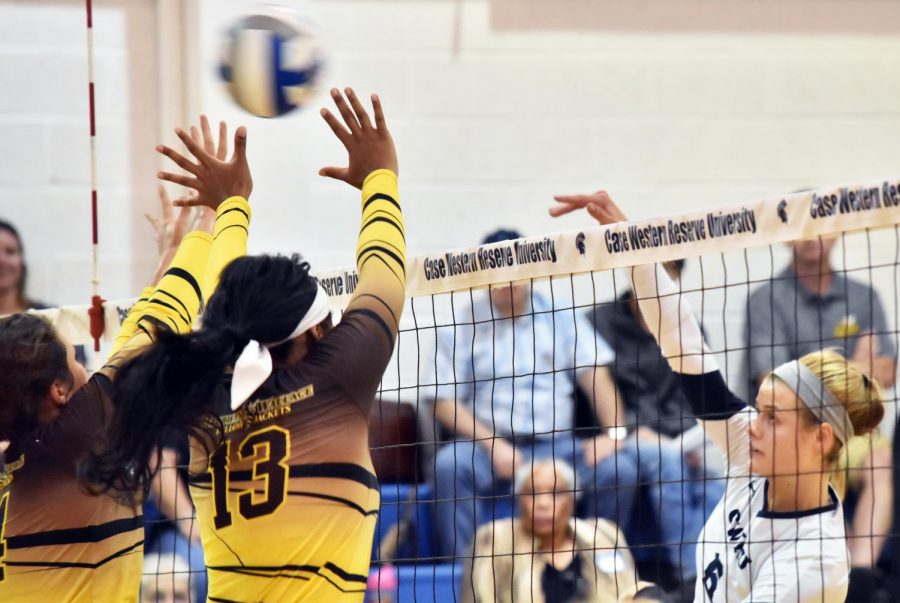 Splitting their final four games, the volleyball team finished fifth in the UAA.

The Spartans didn’t let nerves affect their face down with two nationally ranked top 15 volleyball teams, among others.

The Spartans made the approximately 350-mile trip to the University of Chicago (first-year setter Jiayi Shen described the ride as “so bumpy”) on Oct. 13 and woke up the next morning to overwhelm Brandeis in three straight sets. The box score shows CWRU dominating in every facet of the match: more kills, more digs, more serve aces and fewer errors. Brandeis never reached 20 points in any set.

At the net, second-year outside hitters Karley King and Brianna Lemon managed 10 and nine kills, respectively. Second-year setter Faith Ellis played well all around the court, racking up 16 digs and 33 assists.

The outcome flipped on the team in the next match of the day, with CWRU losing to Emory in three sets. Statistically, the Spartans did not perform up to par. No player had more than seven kills and the team committed seven more errors than Emory.

However, Head Coach Karen Farrell was “very pleased” with how the team performed. She raved about how her girls came out fierce and competitive from the start of the game. Sadly, they could not muster a win and fell by a mere two points in the first set.

Emory proceeded to control the final two sets, winning them by a combined 21 points.

“We could definitely take Emory… We need to go in expecting to win,” stated first-year outside hitter Jana Giaquinto. Her words carry even more weight, since CWRU faces Emory in their first match of the UAA championship tournament on Nov. 3.

First-year outside hitter Bailey Hagedorn believes the key to victory will be “slowing down their offense.”

After a night of studying for midterms, CWRU woke up and played what Farrell dubbed as one of the “best matches we’ve played” against No. 13 Chicago. She was astounded at the play of her team even though they did not get the best of their opponent.

The match went four sets and the Spartans won the third one after losing the first two by only a combined seven points. Chicago ended the match with a 25-21 win in the final set.

Lemon led the team in kills with 14 while King was second with 12.

Hagedorn said that the match was “really fun to watch and play in because both teams were really competitive”, even though the Spartans lost in the end.

CWRU ended on a high note by knocking off Rochester in three sets, improving to 15-9 on the year and 4-3 in the UAA. King had another great game: 11 kills on 15 attempts with only two errors. First-year middle blocker Katie Kaminski added nine kills on a .421 kill percentage.

Farrell reached a personal milestone in this match, winning game 400 in her career.

“It makes you reflect on the overall experience that your staff contributes and your athletes contribute in eras of athletes. It was a nice moment, now we’re focused on our team goal [of] winning five more matches,” Farrell said.

On Oct. 21 the team traveled to Heidelberg University for a double-header against Marietta College and Heidelberg. They defeated Marietta in five sets, but fell to Heidelberg in three.