Volleyball sweeps French, off to best start in history 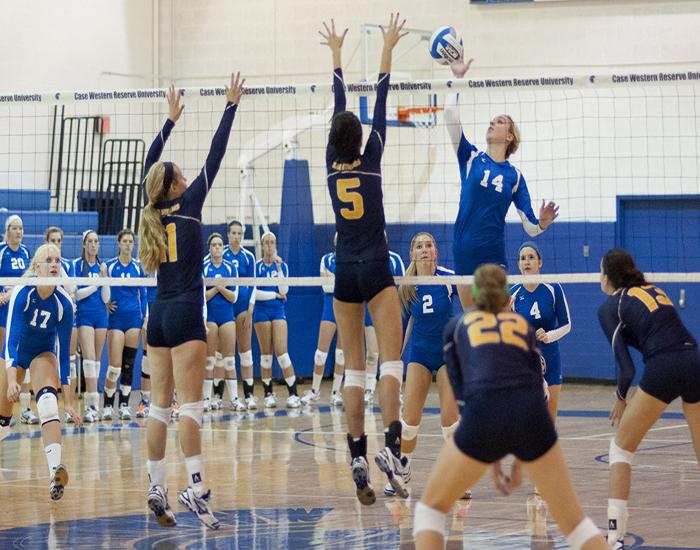 An undefeated weekend at the Marcia French Memorial Tournament left the Case Western Reserve University volleyball team’s record unblemished, as they are off to the best start in program history. The co-host Spartans won four games in a row as they raced to an 8-0 record through the first two weeks of the season.

The weekend was not without a few hiccups as the Spartans faced a hard fought battle against nearby rival John Carroll University, which pushed Case to five games in their first match of the weekend. Case, which had not lost a set so far in the young season, took the first in a dominating fashion from the Blue Streaks, 25-16, but John Carroll pushed back in the second, winning 26-24. The loss ended the Spartan’s 13-set winning streak to start the season.

After being tested by their rivals, the Spartans went on to sweep their next three matches. The second match for the Spartans on Friday was against Franklin & Marshall College. The Spartans defeated the Diplomats handily, going 25-19, 25-12, and 27-25 in three sets.

The second day of the French Memorial Tournament saw the Spartans come out to a tough opening match against the College of Wooster, which looked poised to steal a set or two from the hosts. The Spartans managed to fight off the upset bid with two tight wins in the opening sets, 25-23 and 25-22. With the Fighting Scots deep in a hole, Case was able to close out the rest of the match with a 25-10 stomping in the final set.

The final match of the weekend came against Franciscan University as the Spartan women once again ran away with the victory. Case opened up the match with a 25-7 win and finished out with a pair of wins of 25-14 and 25-19.

Southard earned all-tournament honors for her attacking performance. She finished the weekend with 45 kills, earning her first career UAA Offensive Athlete of the Week award.

Senior setter Breana Freeman had an impressive weekend, totaling 122 sets and leaving her with 2903 in her career. She is just seven away from tying the Spartan program record, held by Susan Eungard, who played from 1996-2000.

The Spartans faced the University of Mount Union on Wednesday night before heading to Allegheny College, where they will play in the Gator Invitational. Results from the Mount Union match were not available at press time. They will take on host Allegheny and Frostburg St. University tonight at 6 p.m. and 8 p.m., respectively. Tomorrow, Sept. 15, they will play Pennsylvania State University at Behrend and Thiel College at 10 a.m. and noon, respectively.