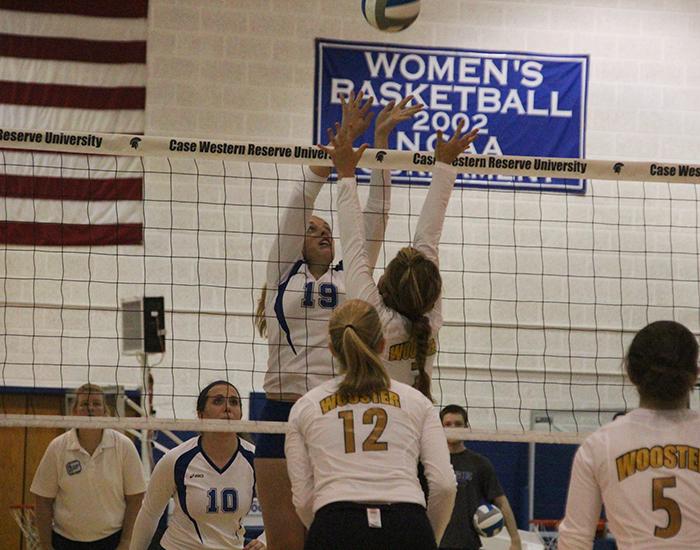 Case Western Reserve University opened the conference volleyball season in Boston, Mass. at Brandeis University where they defeated the hosts in straight sets on the way to a 2-1 record. The Spartans opened the first University Athletic Association Round Robin with victories over the host Judges and the University of Rochester before falling to No. 1 Washington University.

The first weekend left the Spartans with an impressive 14-4 record overall and tied for third in the UAA with No. 13 University of Chicago. Washington and No. 6 Emory University ended the weekend tied for first with perfect 3-0 records.

The opening match saw the Spartans cruise to a comfortable victory over Brandeis. The Spartans swept the Judges (11-7, 0-3) in straight sets: 25-18, 25-19, 25-20. Sophomore middle hitter Natalie Southard paced the team in the opener with 12 kills in 21 attempts for an impressive hitting percentage of .429. The reigning UAA Athlete of the Week, freshman outside hitter Carolyn Bogart, finished second on the team with nine kills. Bogart also had 11 digs, leaving her a single kill away from a double-double.

Freeman and freshman Robyn Marks finished with 19 and 17 assists, respectively. Gulasey led the defense with 17 digs and also led the team with four service aces.

The final match of the weekend came against the No. 1 Bears of Washington University. The Spartans were determined not to be intimidated by their opponents; the last time the two teams met when Washington was ranked No. 1, Case shocked the favorites by upsetting the Bears 3-1 in 2010 at Brandeis.

Unfortunately, the odds caught up to the Spartans as the Bears (16-1, 3-0) proved true to form, sweeping the challengers 25-15, 25-17 and 25-21. The Bears dominated the match, allowing just 26 kills and keeping the Spartans to a dismal .101 hitting percentage. Leading the Spartans was Bogart, who tallied nine kills on the weekend, giving her 31 for the weekend. Freeman finished with 14 assists and Gulasey had 15 digs.

The Spartans will have a week to bounce back at the Blue Devil Invitational in Fredonia, N.Y. before the second UAA Round Robin. The Spartans will play four matches, two each on Friday and Saturday. They will take on the University of Pittsburgh at Bradford at 4 p.m. on Friday and Buffalo State University at 8 p.m. On Saturday, they will take on Nazareth College at noon, before the championship game at 2 p.m.

The Spartans will need to take the opportunity to claw their way onto the national picture as they face a tough gauntlet at the second UAA Round Robin at Carnegie Mellon University. They will face No. 6 Emory in their second match and save what will likely be the match for the third seed in the UAA tournament when they take on No. 13 Chicago in the final match.

The Spartans will return home on Oct. 17 when they face Hiram College at 7 p.m. That weekend, on Saturday, Oct. 20, Case will host a Seniors’ Day in a tri-match against Defiance College and Muskingum University.