Volleyball unable to best conference opponents in Round Robin 1

Battles back versus Oberlin for a straight-set win 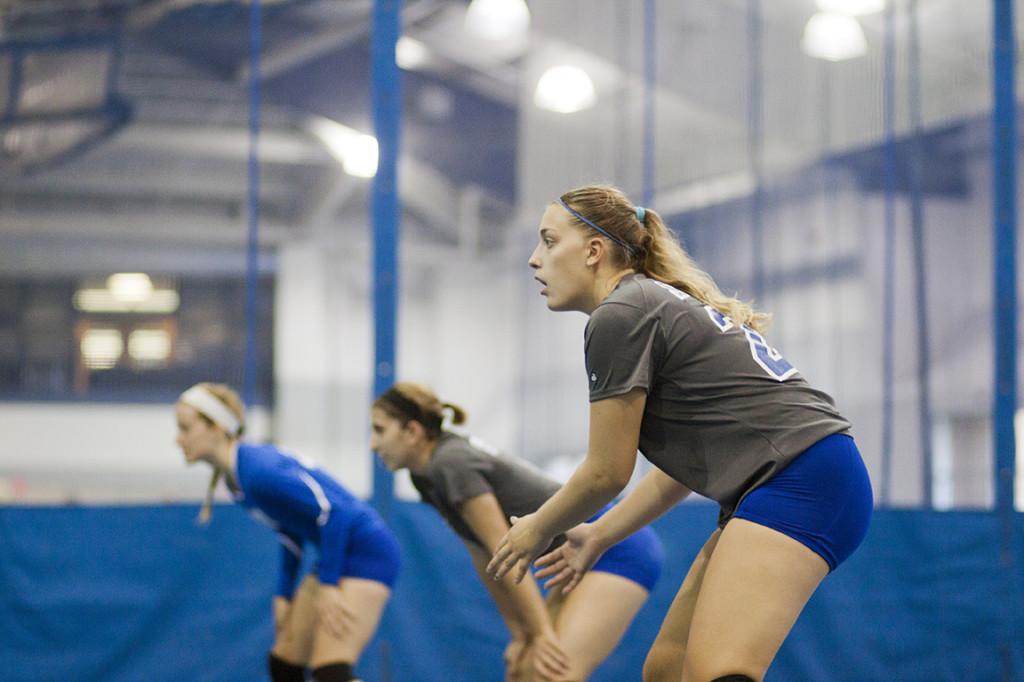 The Case Western volleyball team weathered a disappointing weekend to defeat Oberlin College on Wednesday. The University Athletics Association Round Robin #1 was a difficult challenge for the young Spartan team who was faced with competitive squads from New York University, Carnegie Mellon University and Emory University.

The draws for the weekend were based on last year’s conference results, which led to a rough day for a team with few returning players. The inexperience and lack of confidence led to a frustrating first day with just one set win in two matches.

The competition opened with a face-off against NYU. The team dropped the first set with a score of 25-15, but remained fairly close for the rest of the match. Both Haley Kauffman and Isabelle Wagner notched up eight kills for the CWRU offense, and Shannon Chua and Robyn Marks added to the defensive front with nine digs each during this match. But it wasn’t enough to beat the Bobcats, who won the final two sets with scores of 25-23.

The team continued to be challenged in the second match of the day versus Carnegie Mellon University. The play continued to be evenly matched and the Spartans were able to best the CMU team in one set with a score of 25-22. The trouble was with consistency as the team went through highs and lows with scoring through the remaining sets and lost the match 3-1. Individual players still brought their best game with Wagner adding 12 kills to her total and Katie Best contributing 23 digs.

The team faced their most difficult challenge yet with conference leader Emory University on the schedule for day two. Despite the disappointments of day one, the Spartans went into the match playing their best. With tremendous effort by each member of the team, the Spartans held their own throughout the match. Carolyn Bogart contributed eight kills and eleven digs; Best added 12 digs to that total.

Even considering the straight-set loss, Coach Karen Farrell still acknowledges the high level of play during this game, saying it was one of the best-played matches by the team so far this season. This is a good sign, as there is still another Round Robin tournament before the UAA Championship next month.

Farrell is most concerned with the consistency of the team. “Our biggest challenge is continuing to develop as a team and make sure everyone is playing their best volleyball at the same time,” Farrell said. Instead of seeing one or two players getting big numbers, she would like to see multiple players raising their level of play to meet high expectations in the weak spots of the current roster.

The team’s resiliency was put to the test as they went up against Oberlin College on Wednesday. This was a winnable match, but dependant on the focus and confidence of the entire team. The first set started out evenly matched with the Spartans trading points with the Yeowomen culminating in a 24-19 deficit. The ladies fought back five match points for a 26-24 victory.

The Spartans didn’t look back as they finished off the opposition in the two remaining sets with scores of 25-17 and 25-10. Bogart led the offense with ten kills with the collaboration of Marks with 28 assists and Best with 13 digs on defense. This was a meaningful win going into the rest of the season. The team needs to continue to show this resilience to beat back negativity amid challenging match-ups.

The Spartans look to learn from their experience last weekend moving forward into the difficult conference rounds to come. There are multiple experienced teams that play at a high level and the CWRU team needs to stay motivated if they want to compete. “Every time we step on the floor, we have to prove ourselves,” said Farrell of the young squad. “We can’t look past any opponent but we can’t be fearful of any opponent. We have to get it done.”

The team looks to get it done versus Hiram next Wednesday at Veale before the second Round Robin tournament in St. Louis starting Oct. 19th.