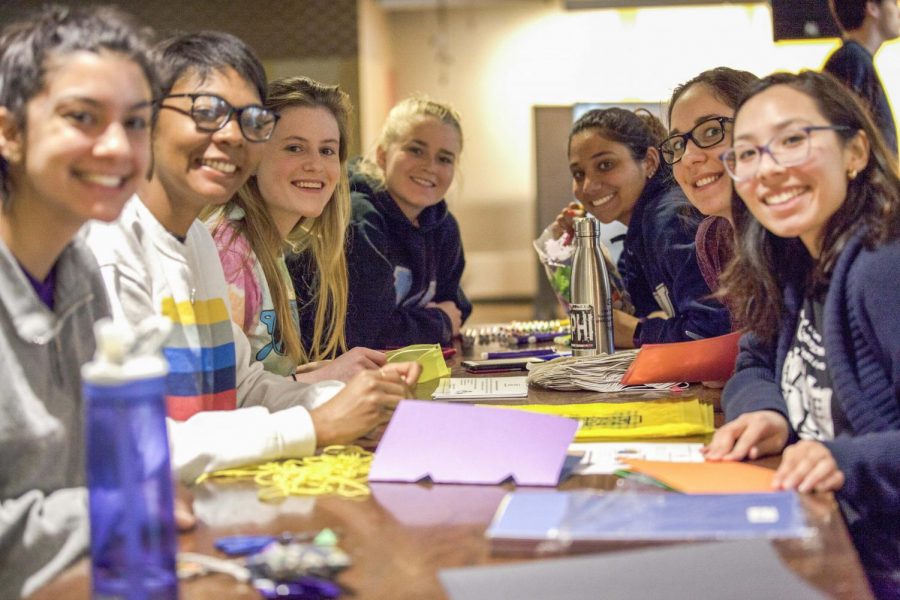 Participants of Project Sunshine's Sending Sunshine fundraiser smile with the goodie bags they produced for patients at local children's hospitals.

The goodie bags, which were filled with superhero themed crafts, “[were] for younger kids,” said PR Chair and first-year student Elise Korbel. “[Each bag included] a superhero mask [its recipient] can decorate, a journal that they can use to document their superhero adventures and markers and stickers to decorate.”

According to President and third-year student Lori Sun, Project Sunshine’s goal “is to bring sunshine to the lives of kids and their families in hospitals. We do that through volunteering directly at the hospital, at the Ronald McDonald House and then we have events like this; they’re intended to bring programming that’s free and fun for the kids to enjoy while they’re going through a hard time.”

According to Sun, Sending Sunshine is one of the club’s primary means of connecting with students across campus who might not be otherwise involved with Project Sunshine.

“One of my favorite parts about Project Sunshine [are] the different kinds of services,” Korbel explained. “You don’t have to be University Hospital (UH) trained, so [students] can still volunteer indirectly for the kids, like coming to Sending Sunshine.”

The Spot was packed with volunteers, and by the end of the day, Saturday, March 24, 277 gift bags were produced. Although Project Sunshine narrowly missed their goal of 300 bags, the event was still a success.

“This is probably the best turnout we’ve had,” Sun said.

Out of respect for privacy, there is no follow up with families after the bags are delivered; however, it is clear the goodie bags clearly have a positive effect on their spirits.

“It is really nice to see, you know,” Sun said. “Sometimes, kids will be holding little goodie bags when they’re waiting for the Healthline with their parents, or sometimes people will post on our Facebook page about what a good time their kids had making the crafts.”