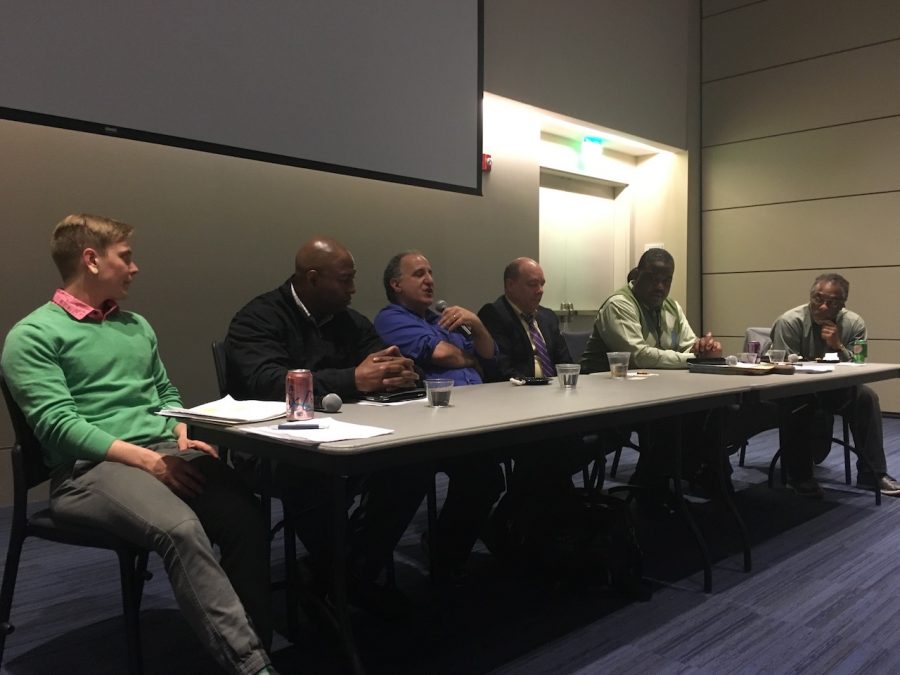 As part of the FYE program, Office of Residence Life invited panelists from local non-profit organizations and faculty at CWRU to talk about mass incarcernation. Each year, the office hosts the "Walk in My Shoes" program that focuses on a different social justice issue.

On Wednesday, March 29, people gathered at the Tinkham Veale University Center Ballroom for a panel discussion on mass incarceration, as part of the First-Year Experience (FYE) Walk in My Shoes program. With panelists from several local non-profit organizations and from Case Western Reserve University, the talk brought awareness to the different aspects of mass incarceration.

Walk In My Shoes is an annual program hosted by Residence Life’s FYE that aims to introduce CWRU students to current social justice issues in the nation. The panel on mass incarceration is the last event of the four that FYE hosted for the Walk In My Shoes program this year. The theme was chosen by students who work at the four first-year residential colleges as resident assistants (RAs).

“We met with that group [of RAs], we discussed some ideas that we had for prominent social justice issues right now… and they all decided that they felt most passionate about mass incarceration and we are best connected to resources to bring people in to discuss that topic,” said Amber Gerace, the director of Mistletoe Residential College.

The evening started with a keynote speech given by David Miller, an associate professor at the Jack, Joseph and Morton Mandel School of Applied Social Science. Miller had worked at the Perry Correctional Institution in South Carolina for two years, a job where he interacted with inmates on a daily basis. It was through this experience that he became aware of the issue of mass incarceration.

Starting his speech with friendly banter about the Duke University basketball team, a rival of University of North Carolina Tar Heels, which he supports, Miller soon assumed a graver tone as he recalled his experience working for the Perry Correctional Institution in South Carolina. By providing consulting services at a maximum security prison, Miller was able to learn about the prison dynamics through his own eyes. He described how he had to go through eight doors every morning before reaching his office. He worked with individuals coming off from death roll, or going to death roll. He helped people charged with mass murder, rape and kidnapping

As he related his experience at the prison to the audience, he quoted from an inmate he once encountered.

“They built prison for two people. Black people and white people who don’t know they are white, ” said Miller, who went on to explain how racial minority and financial inferiority is overrepresented in prisons.

“The commodity for prisons are bodies,” said Miller. “Those bodies tend to be black, brown and most of the time, poor. Black, brown and poor bodies find their ways into prisons for very, very stupid things.”

Drugs, illiteracy and the lack of education are the three things that Miller stressed as the driving factors that lead people into the prison. They also form obstacles for inmates who are released and try to live normal lives.

“An individual who leaves the prison is often given a ride to the bus station and dropped off there,” said Miller. “They go back to the communities without a set of skills without a connection with a family.”

Therefore, as Miller explained, often times these released prisoners end up back in prisons again as there was no support to get themselves back on their feet.

According to Miller, the United States incarcerates more people only to follow North Korea and Sudan.

“That’s not good to be in that neighborhood with North Korea and Sudan in terms of putting people in jail,” remarked Miller.

Following Miller’s speech, seven panelists gathered at the front of the room to answer questions submitted earlier by the audience. Representatives from American Civil Liberties Union, Roman Catholic Diocese of Cleveland Ministry to the Incarcerated, Case Western Reserve University School of Law and Puncture The Silence, an advocate group working to end mass incarceration, talked at the panel from their different perspectives on the issue. Questions discussed ranged from life in a prison, prison labor to ways to improve incarceration environment for prisoners.

Second-year student and RA Dasani Madipalli thought that the talk was very informative and helpful.

“The program was very informative and talked about an issue that I wasn’t aware of,” wrote Madipalli in a message. “Additionally, at the end they provided useful and practical ways for students to get involved and help, which was really nice …. Usually when you’re exposed to issues, you don’t know how you can help, but this addressed that.”