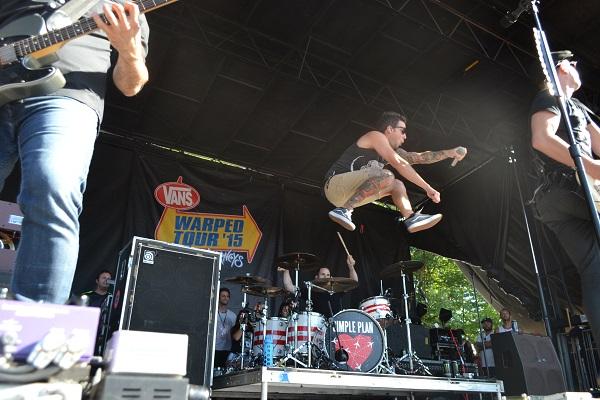 Simple Plan put on an energetic show that defined a highlight of Warped Tour 2015.

Singer Shane Told paced the length of the Monster Energy stage, and shouted into his microphone:

“Jump as high as you can, like Kyrie fucking Irving!”

As audience members pounded their feet into the dirt, dust rose up like a sandstorm above them, at first making the scene look like a gathering of smokers. This energy remained for the entirety of the post-hardcore band’s set.

…but it didn’t necessarily stay for the entirety of Warped Tour, during its stop at Blossom Music Center on July 23.

The high points of the day all seemed to be throwback bands. Simple Plan gleaned a massive crowd that sang along to hits like “I’d Do Anything.” The early 2000’s band’s popularity wasn’t a shocker, considering it was their 10th time on the tour.

And then, Never Shout Never’s adorably goofy Christofer Drew had the mostly-female audience swooning at love songs “I love you 5” and “Trouble.” Plus, the many cat references (including a giant backdrop of a psychedelic-looking cat with a third eye) and dopey puns hooked plenty of teens and tweens who weren’t around during Never Shout Never’s heyday.

Asking Alexandra had a surprising amount of showmanship for a metalcore band, with singer Denis Stoff shouting out to the audience, “Let’s start some fuckin’ mayhem everyone!” (Meanwhile, a grumpy-looking stage guard held fingers over his ears.)

These were four of the strongest shows of the day.

Then there were the standard shows:

PVRIS was disappointing; sure, singer Lyndsey Gunnulfsen has a fantastic voice, but she looked shy onstage, with little movement or crowd interaction. It was great musically, but dull in terms of stage activity.

Then there were the flat-out annoying shows:

During The Wonder Years’ set, an audience member was harmed in a mosh pit, and singer Dan Campbell stopped the show to see if he was okay. At first this was endearing… but then he took way too much of his precious stage time just staring out at the audience looking confused, and was forced by Warped Tour staff to continue his set, to which he begrudgingly said, “They told us to play so we’ll play… but a slow one. So don’t, uh, jostle too much.”

And then Metro Station singer Trace Cyrus whined about rumors that have spread about the band. He tried to defend their style and their motivation to make music and how no one should judge them. (Meanwhile, he proceeded to take off his shirt, but keep his fedora on… sorry, but I’m judging.)

All things considered, Warped Tour brought a lineup that didn’t seem as stellar as last year’s, but also wasn’t as reliant on throwback bands. This year’s festival lineup was a mix of good, bad… and just okay.

All photos by Betsy Nickoloff/Observer.