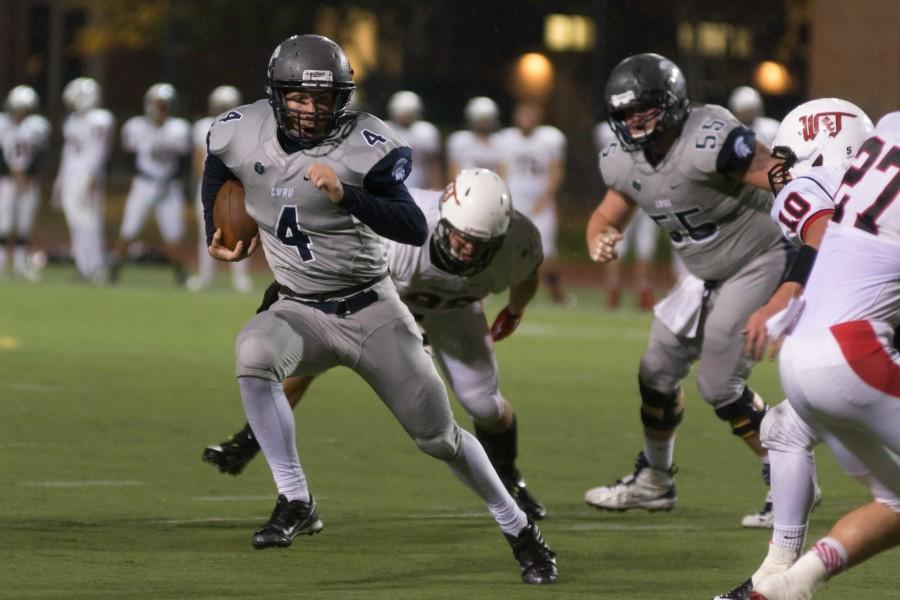 Quarterback Rob Cuda rushes out of the pocket during Friday’s win over W&J. Cuda led the Spartans to their sixth straight win and will look to continue the streak this week at home.

The Case Western Reserve University football team rose to the challenge this week to keep their six game win streak alive and to remain tied atop the President’s Athletic Association (PAC).

The Spartans proved that they belong amongst the best this weekend, as they hosted the number 15, nationally ranked Washington & Jefferson College Presidents Saturday night. The Spartans and their fans endured rain, which ranged from drizzling to pouring for much of the game, and toughed out in typical Cleveland fashion.

As expected the Presidents’ running back poised problems for the Spartans, breaking away for some huge gains to keep the teams neck and neck. The Spartans found themselves playing catchup after the Presidents scored first in the second quarter after a scoreless first quarter.

CWRU responded but each time the Spartans would score the Presidents would answer and thus the two teams traded blows until late in the fourth quarter. The Spartans didn’t get their first lead of the game until fourth-year student and receiver Bryan Erb caught a touchdown pass with just over two minutes left in the third quarter to go up 28-21.

While the Spartan defense struggled at times to hold back the President offense, especially in the rain, the Spartan offense didn’t miss a beat. Second-year student and starting quarterback Rob Cuda lead a masterfully executed charge for the Spartans in which he completed 21 of his 35 passes and found five teammates in the endzone. Cuda’s aerial attack accounted for 278 yards and he rushed for an extra 100 yards.

The game-winning drive broke the 28-28 tie with a two play drive as Cuda and Erb marched the Spartans into the endzone on two passes of 32 and then 39 yards. With the Spartans up 35-28 with 5:34 left to play the Spartans looked to run out the clock, and the resultant clock management, and Spartan run-offs, made for some contentious moves, especially between the two fan bases, packed together under the shelter of the DiSanto Field Pressbox.

However the final attempt for the Presidents was foiled by Spartan cornerback and third-year student Nick Kwon who snatched his second interception of the season with two seconds of play left, driving the final nail into the Washington & Jefferson coffin.

The CWRU level of play this week proved that their season has not been a fluke and they were rewarded for the display with a national ranking in the D3football.com National Poll, sitting at 23rd in the nation. It is the first time that the Spartans have been ranked since the end of the 2009 season.
While the Spartans sit tied with Thomas More in the PAC, CWRU will be looking back toward the University Athletic Association this week. The Spartans will face off against the Washington University Bears this week and will look to buck the historical trend of failing to their UAA rivals. The Spartans have only bested the Bears in nine of their 29 meetings.

CWRU will be forced to maintain their same level of play from this past weekend as any mistakes will be costly. Mistakes have been rare for the Spartans however, as Cuda has posted 23 touchdowns and 226 pass attempts this season and has yet to throw an interception. There were a few close calls last week but nothing has yet come back to hurt the Spartans.

While the Spartans have excelled with the high powered offense of Cuda, and his many offensive options, they will need a continued strong showing from the defense. The Spartans will look for strong play from second-year student and safety Cody Calhoun who has 35 tackles, fourth-year student and linebacker Gavin Sandidge who has 33 tackles, and finally Kwon who has posted 30 tackles.

The Spartans will need to focus on shutting down Washington University third-year student and quarterback J.J. Tomlin who is currently eighth in the nation at the DIII level with 2,206 passing yards. However the Washington attack isn’t all in the air as the Bears have two backs who have combined for eight touchdowns and 669 yards on the season. The Spartan defense has excelled against the run so the true test will be in the air.

Both teams will be looking to continue on their winning streaks as the Spartans have now won six straight and the Bears have put three straight in the wins column.

With all of this taken into consideration, The Observer is concerned about the Spartans this week but won’t risk throwing a wrench into the streak and therefore we are predicting a narrow 31-28 win for the Spartans, but this will be a true test.

The action kicks off on Saturday at 12 p.m. on DiSanto Field.