Editorial: We will stand arm in arm until there is justice 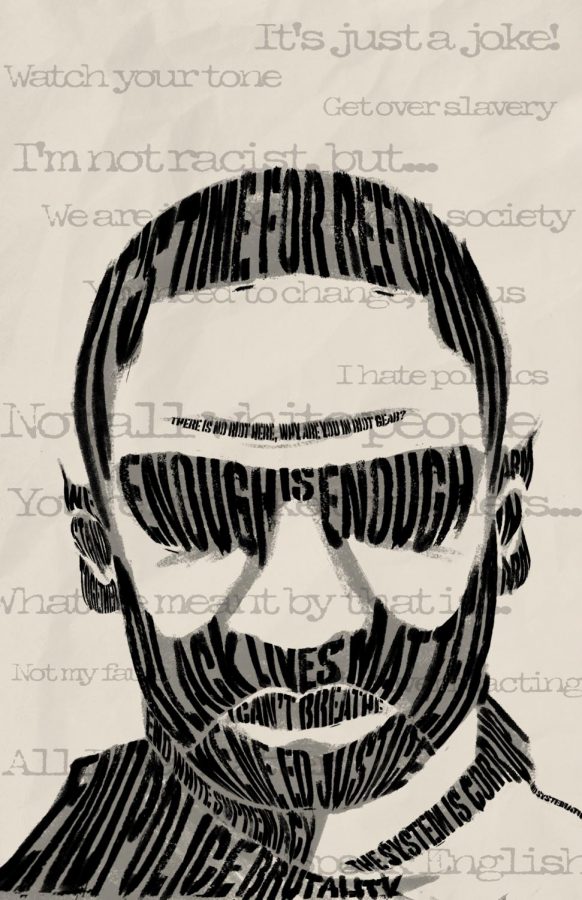 We live in a country which systematically oppresses minority groups while promoting the interests of the white community. Systemic racism exists in all areas of society, from housing to education, from policing to healthcare. While this discrimination and abuse has existed in America for over 400 years, it has come into sharp focus in the past week following the murder of George Floyd and subsequent protests across the world.

On May 25, George Floyd was murdered by Minneapolis Police Officer Derek Chauvin after the officer dug his knee into Floyd’s neck for eight minutes and 46 seconds. Three other officers—Tou Thao, Thomas Lane and J. Alexander Kueng—stood by and simply watched the incident unfold.

Floyd’s murder was by no means the first to result from police brutality in the U.S. However, a video of his killing circulated across continents, immediately leading people to take to the streets in protest.

From Minneapolis to Berlin, along with other cities around the world, people are now marching to demand an end to racism in all forms, and to demand justice for the Floyd family and others who have lost loved ones to police brutality.

The U.S. was built by people of color. And today, hundreds of years later, the color of our skin is still a strong factor of division. Slavery remains legal under the 13th Amendment for those incarcerated, who are disproportionately people of color. Furthermore, votes are repeatedly stolen by gerrymandering and voter suppression, while school systems and housing are more segregated now than they were in the 1950s.

White privilege further exacerbates people of color’s second-class treatment. Racism affords white people the privilege to work with others who look like them. It affords them fearlessness in their actions and to largely feel welcome in public institutions and social settings. Meanwhile, overt and covert white supremacy forces people of color to reflect daily on their race and its implications. Many forms of covert white supremacy are still socially acceptable, as many people fail to recognize why they are problematic. These forms include denying racism, tokenism, victim blaming and cultural appropriation.

The aforementioned, ongoing protests are global, collective acts of solidarity which say, “Enough. We will no longer be divided. Instead, we will stand together and demand anti-racist policies and actions.”

It is not enough to simply convince ourselves that we aren’t racist or to privately declare so to our friends; we need to be actively anti-racist. After 400 years of pillaging the lives, homes and wealth of Black communities, we must end the cycle of white elites enriching themselves off of other people’s livelihood and land.

White people and non-Black people of color also need to address racism in their communities, which includes initiating challenging conversations with family members or friends. It is not acceptable to “keep the peace” or to wait for the conversation to change; doing so forgoes personal accountability and only furthers false, racist and unsafe narratives. We are responsible for our words and actions, and both must align in order to counteract beliefs that promote white supremacy and racist ideology.

People in positions of power must also use their power to elevate the voices of minorities and change institutions and civil society so they will listen and be accountable to all individuals. And it’s not just leaders who have this task—all human beings have responsibilities respective to their professions or circumstances. Physicians and medical workers, for example, need to address the racial disparities that make Black women three to four times more likely to die in childbirth than their white counterparts, among countless other inequalities. Teachers have a responsibility to address indigenous and minority peoples’ history instead of exclusively telling the whitewashed narratives typical in many American classrooms.

Local and national politicians must enact policies that ensure real, systemic changes. One such policy is defunding the purchase of military equipment that is used in police departments in favor of more humanized responses. That is, incorporating social workers and other health service professionals into police departments to better handle social situations, such as homelessness, mental health issues and substance use disorders, rather than relying on police intervention to combat such problems. Furthermore, we must hold police officials and departments accountable for their unacceptable behaviors.

Police officers have a challenging and risky job, having to assess situations in a split second and respond accordingly. Notwithstanding these challenges, policing must change so that people of color are not disproportionately arrested, harassed and killed. We must also ensure that officers guilty of these abuses are held accountable for their actions. While being a police officer might come with a high risk, this does not mean we should accept high levels of error.

There are additional ways we can take responsibility and hold ourselves accountable—especially to the Black community. If you can, protesting is one of the most conspicuous acts of solidarity one can engage in. But personal responsibility can also take the form of donating to protester bail funds, investing in Black businesses, elevating Black voices on social media, calling congressional leaders and speaking up against problematic comments. Taking responsibility also means voting out political leaders who refuse to push for systemic change.

What we—especially white people—need to remember, is that while we may be uncomfortable or worried about the violence resulting from the protests, Black Americans live with such fear every day. Before we fixate on the violence of today’s protests, we need to discuss the violence perpetrated against Black people for the last 400 years, which unfortunately continues today. We must also address the violent riots which white people have carried out, largely without punishment, as a result of a sporting victory or loss.

We must all take responsibility to replace leaders who wish to divide us, extinguish the flames of racism and change our tomorrow to be radically different than today. We have a long way to go, but standing together in protest for a better reality and a better future is a good place to start.

A tragedy occurred in Minneapolis two weeks ago. And tragedies like it are happening too often in too many towns to too many people. As we stand arm in arm, we cry out that we are all George Floyd, we are all Tamir Rice, we are all Breonna Taylor, we are all Desmond Franklin and there will be no justice until there is justice for all.