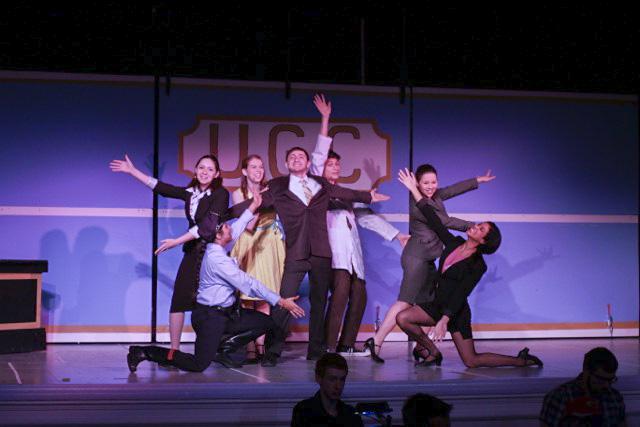 At the opening night of a show, you need to take mistakes with a grain of salt. Actors are still fully getting into their roles, set changes can be a little clunky and lighting and sound crews often have only had a couple of days to actually practice their complicated changes.

That’s why there is definitely a lot of wiggle room in reviewing the Case Footlighters’ production of “Urinetown” last Thursday, March 26.

While there were lighting mishaps and a couple of muted microphones, the troupe still performed well for an opening night. And despite the Jolly Scholar’s Karaoke Night thumps occurring throughout the entire play (which was held directly upstairs, in the Thwing Ballroom), the show still went on.

Although it took place in the chaos of Greek Week, the group managed to fill around 40 percent of the audience seats, due to a prospective student night free-ticket deal. The lights dimmed, the small pit band began to play and the show was off.

“Urinetown,” a dystopian musical comedy about a world with too many people and not enough water, is self-aware to say the least. Characters constantly break the fourth wall to speak out about what will happen in the next scene or to comment on the ridiculous nature of some dialogue.

All actors in the play took up a specific flair, whether it was adopting New Jersey accents or repetitive twitches. Still it took a few of the actors a little while to warm up into their roles. When Officer Lockstock (junior Suraj Saifullah) first entered the stage, he lacked the meanness his sort-of evil policeman character needed. But later when he came back with a growled warning, “Not in my town!” there was no coming back from his humorous (but still evil) character.

Similarly freshman Aaron Magid started out as seemingly too nice for his role as Caldwell B. Cladwell. He seemed like a greedy but caring father, rather than the corporate monster he really was. It wasn’t until “Don’t Be a Bunny” that his despicable nature came forward, complete with a nefarious cackle to top it off.

These supporting actors were stronger highlights in the show than the main characters. Bobby Strong’s teenage rebelliousness was his only noticeable characteristic in the plot; even though junior Jacob Lang tried to break his character out of its cookie-cutter mold, it ended up staying stuck in its starstruck hole. Honestly this character’s most memorable moment onstage was his death, when he was pushed off a building by villainous fiends.

Much the same can be said of Hope Cladwell, played by freshman Bessie Bulman. Her bubbly, lovely personality was a little more quirky than Bobby Strong’s, but the character fell into the same trap of the “love interest.” Still one couldn’t help but utter an “aww” when Lang and Bulman embraced onstage for a kiss after an endearing (and slightly nonsensical) song together.

The acting was mostly spot-on, and if it wasn’t great at first, it improved throughout the show. However the same can’t be said for the technical aspects of “Urinetown.”

Microphone problems led to hushed whispers being transmitted over the sound system, and certain microphones were not turned on during key moments in the show. Lockstock’s microphone took between five and 10 minutes to function properly in Act II of the play.

Additionally toward the beginning of Act II, the lights in the hallway outside of Thwing Ballroom turned on, flushing the entire stage with a faded white light. It took a couple of minutes to turn off and distracted from all stage action during this time.

It’s also worth mentioning, once again, the ever-thumping bass from the Jolly Scholar just one floor below, even during tender moments, like Lang and Bulman’s kiss.

From what I hear, the performance only got better over the weekend. As with any theater show, most of the issues in Footlighters’ production of “Urinetown” were probably due to the troupe’s freshness onstage. The show had many more highs than lows, and the lows were easily excused.

Overall it was an entertaining night full of singing, laughs and (not so surprisingly) political messages. Despite the laughs in “Urinetown,” the show still provided a thought that lingered long after the show.

As Lockstock looked out at the audience and asked, “Don’t you think people want to be told that their way of life is unsustainable?” the audience was forced to ask themselves that question too, despite the giggles.