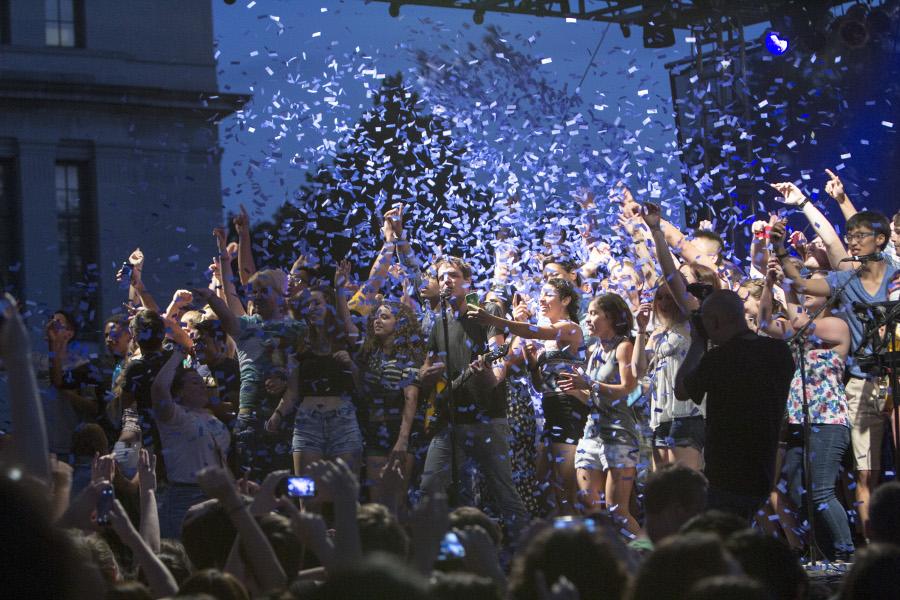 Then, she started talking into the wrong microphone (oops), was corrected with a different mic stand and gave her speech about donations to CWRU. “We reached that goal [of one billion dollars] two years early!”

The crowd broke into applause. Fireworks shot off the top of the new building. Snyder started talking again, but one last firework cut off her speech with its sharp blast from behind the crowd (also oops). OK Go lead singer Damian Kulash giggled, standing just a few feet behind her.

The beginning of “Let’s Go!,” the huge event of Tinkham Veale University Center’s (TVUC) grand opening on Aug. 24, wasn’t too graceful. But, with a bunch of nerds in front of her and a band of nerds behind, no one judged Snyder’s moments of awkwardness on stage.

After she delicately stepped down from the stage, Kulash jumped to the microphone and remedied the situation. “I hope you’re all too hungover to go to your first class tomorrow!” he shouted.

OK Go didn’t just sing songs on the stage. They cracked jokes, messed with audio equipment and constantly made jabs at CWRU’s nerdy reputation. Only a couple songs in, Kulash started getting self-conscious about the sweat spots rapidly growing across his shirt.

“I really want to impress you,” he said nervously, “and I don’t want to be a sweaty nerd.”

For a band with multiple top hits and a range of successes (a Grammy for Best Music Video, an MTV Video Music Award and multiple Webby awards), it was cool to see that they still showed some of their nerdiness onstage.

Kulash was personable, even when technical difficulties got in the way of a quick start to “There’s a Fire.” And even when they were stalling, bassist Tim Nordwind found a way to keep the pace up with a question and answer session with the crowd.

Audience member: “How long did it take you to grow your beard?”

Nordwind: “Well, for our last music video, I shaved half my beard,” (here, he talks about the video, aka trippy optical illusion-filled “The Writing’s on the Wall”), “but it took me three months. Sorry that wasn’t an exciting answer. Now we’re ready to play.”

OK Go wasn’t a by-the-books kind of live band. If the audience expected to hear “Here it Goes Again” in studio quality, they were sorely disappointed.

But, if they were prepared for an ice-bucket challenge on stage, Kulash playing an acoustic song in the middle of the crowd, children’s toy instruments and an all-out party onstage at the end of the show, then it was a night to remember.

And even though Kulash wouldn’t stop going on about our nerdiness, it was endearing. After the show, when asked if he really thought we were all nerds, he stopped near the gate. “Well, yes,” he said. “But I went to Brown. We’re all nerds here.”