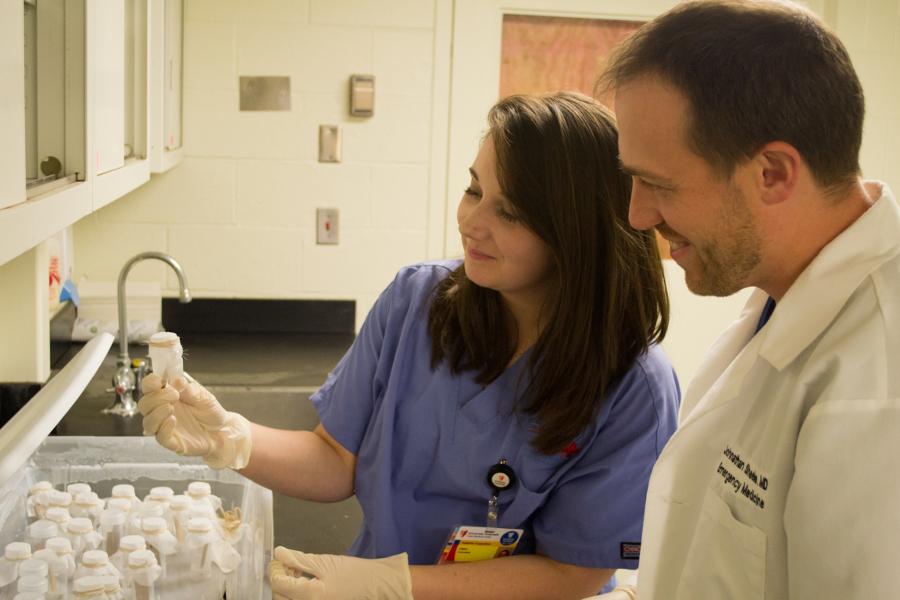 Posted around campus are dozens of fliers, for everything from University Program Board’s Spot Night to advertisements for classes to information about student group events. Most of them blend together into an easily ignorable blob of information. One, though, stands out.

“Healthy adults are needed to allow bed bugs to feed on them and then provide blood and saliva samples. Compensation provided,” reads the nondescript, white poster.

Dr. Johnathan Sheele, assistant professor and director of research for the Department of Emergency Medicine, hopes that this posting will help him get participants for a study on the immune response that develops after being bitten by bed bugs.

Sheele first became interested in bed bugs when he found a way to kill them. Sheele, assistant professor and director of research for the Department of Emergency Medicine, found that the antiparasitic drug ivermectin killed bed bugs, a discovery that landed him in the New York Times and the Huffington Post.

Sheele again encountered bed bugs when he started work at Case Western Reserve University. He noticed them arriving on patients in the emergency department, an issue that often forced them to close treatment rooms and call an exterminator.

“It has gotten to be a big problem,” Sheele said.

Though bed bugs usually only cause minor rashes, and, in rare cases, more serious problems like social isolation, depression or severe anaphylaxis, they present a serious problem because of how expensive they are to exterminate. Sheele estimates that bed bugs cost his department about half a million dollars in direct and indirect costs per year.

Bed bugs have had a huge resurgence since the 1990’s for unknown reasons, though the reduction of pesticide usage and new travel patterns may have contributed. Ohio is one of the states most affected, with Columbus, Cincinnati, Dayton and the Cleveland area all listed among the top 10 worst infested cities.

According to Sheele, little is known about the clinical effects of bed bugs, and almost nothing is known about the human immune response to bed bug saliva. Sheele hopes to fill this gap in knowledge through his study, which he is doing in collaboration with Dr. Tom McCormick from the Department of Dermatology.

“An interesting thing about bed bugs is that they do not transmit any disease to humans,” said Sheele. “But they do cause a huge amount of fear.”

When dealing with patients who have bed bugs, Sheele is frustrated by the inability of medical providers to properly address the bed bug problem.

“Physicians ultimately have to discharge their patients back home to be re-bitten,” he said. Sheele hopes that his current study, combined with his previous work with ivermectin, will give physicians new options to diagnose and treat bed bugs.

“When a bed bug feeds, it injects all kinds of things into your body, including proteins,” Sheele said. In response, the human body creates antibodies against the bed bug proteins. In his current study, Sheele hopes to identify the antibodies against bed bug saliva in order to develop a diagnostic test to determine if a person has been bitten by a bed bug.

“We expect that we will identify which antibodies humans make in response to bed bug bites,” he said.

Sheele said they have “only just begun feeding bed bugs on study subjects,” and the two year study is still in its early stages. While the squeamish might wonder who would even allow a bed bug near them, Sheele has received a number of bites on his advertisements for research subjects.

“I am impressed at how many people have contacted me to participate in this study,” he said.