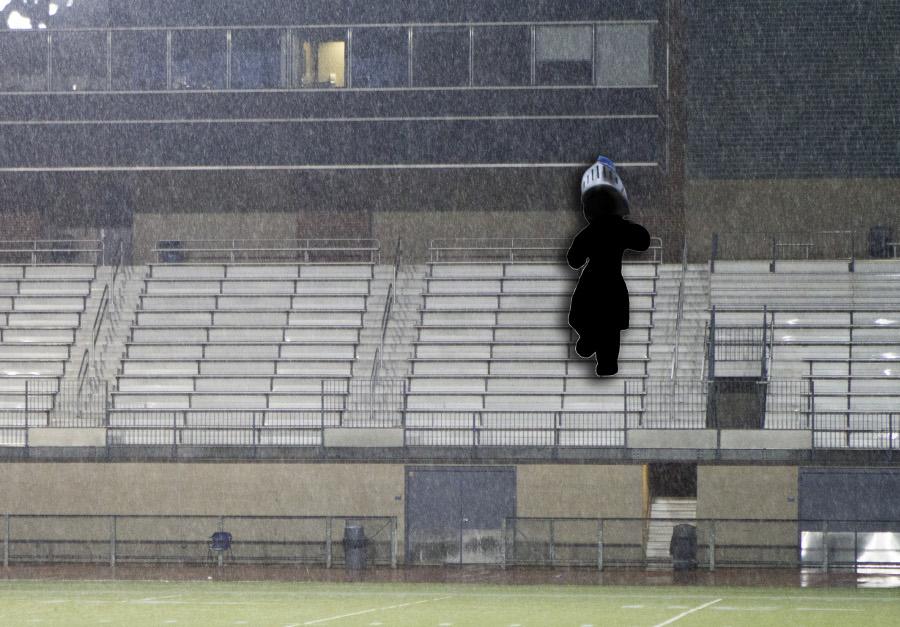 A horrible tragedy struck the members of the Case Western Reserve University community. Our beloved mascot has gone missing.

Spartie is no where to be found. He was last seen happily smiling and waving during orientation week. He flexed his muscles and helped freshmen move into their new residence halls, he pumped up our excitement for being back at our second homes. He hasn’t been seen since. Spartie has been missing from the past football games. At the kickoff to homecoming week at DiSanto Field last weekend he wasn’t present. No one can find him. His last Facebook post was Aug. 19.

We at The Observer are responding to his disappearance with the utmost concern. Because it is homecoming week, his presence is expected and anticipated. Should he not show, the results would be devastating on the spirit of the campus community. If Spartie has not been seen at sporting events on campus, how can we expect him to show up after weeks of mysterious silence to the homecoming game? So this leaves us with the question, where is Spartie?

We start our search at Spartie’s home base, which is not the athletic department but rather the Office of Student Activities and Leadership. Here is where the trail becomes slightly murky. People know that the Case sports teams compete under the moniker of the Spartans. Furthermore we can all recognize the intimidating blue and gray helmet logo that graces many of our CWRU team shirts. This fierce logo is the logically the property of the Case Western Athletic Department.

In contrast, our beloved Spartie is more of a softy than the fierce Spartan head logo and has therefore been employed by the Office of Student Activities and Leadership. Both athletics and student activities report to the Office of Student Affairs and so while the mascot does not work for athletics, he could still attends games and events with ease. However, he seems to be kept on the sidelines, or in the locker room as he has been absent from any game that student activities isn’t also promoting.

In addition, Spartie works with another mascot on the aptly named mascot team.
Some of the upperclassmen will remember that this other mascot is the Spartan, a walking, living Spartan who is a verbal ambassador for the university at receptions and formal events. He and Spartie split the duty of representing the university, since Spartie, while being a bundle of energy, is unable to speak.

“If we play on a Tuesday night or Sunday afternoon, I really don’t expect anyone to show up.” –men’s basketball player Dane McLoughlin

The Spartan role is taken on by one deserving student a year as a leadership role. At this time, the listed Spartan is Nicholas Barron. However, Barron was a second-year student during the 2011-2012 school year and therefore has likely graduated.

We at The Observer were unable to contact Barron.

Therefore with both members of the mascot team strangely absent from campus we remain skeptical of the reliability of a Spartie reappearance for homecoming. Our mystery goes deeper, where is Spartie?

The next stop on the search for Spartie was to look at the wide variety of athletic spaces. Surely Spartie must be attending games and cheering on his fellow Spartans.

Walking around the campus on a nice day students can be seen jogging, playing basketball, ultimate Frisbee or soccer outside. Everyday students utilized the Veale Center or the workout equipment in the Village. Students here care about their health and enjoy participating in sports. March Madness, the Super Bowl and the Browns Game are aired in most residences on campus. Hundreds of students compete on teams at the varsity, club and intramural levels.

Spartie isn’t here, but then again many students aren’t here either.

There is a population here at Case that cares about sports. However, this doesn’t transfer over to supporting the Case student athletes, despite their strong play against other top schools. Spartie isn’t here, but then again many students aren’t here either.

Furthermore, last seasons’ 1,605 people per game accounted for 35 percent of the student body, if all of those people had been students. Sadly, most of these fans are parents, siblings, alumni and even fans of the opposing team.

Matt Lake, the associate director of intramural and club sports here at CWRU, said “I would be ecstatic if we could get an eighth of the student body in the stands at every game.”

“We usually get a decent crowd for Friday night games, but other than that it is pretty small,” added Dane McLoughlin, a teammate of Person, “If we play on a Tuesday night or Sunday afternoon, I really don’t expect anyone to show up.”

Sadder still is the attendance at baseball games in the spring. Over the past four seasons the Spartans have put around 126 people in the stands per game at Nobby’s Ballpark. Last season saw a mere 75 people per game compared to 148 the season before. Baseball is one of the three largest sports in this country, yet the Spartans only pull in roughly three percent of the student body per game, and most again aren’t students.

If students aren’t at the game, why would Spartie attend? We didn’t find him there, so where is Spartie?

Historically, the Western Reserve University Red Cats and the Case Institute of Technology Rough Riders once dominated this land. The Spartans had yet to arise to rule these lands along Euclid. The mascots of these schools were long standing rivals who were revered by their respective schools, with sports dating back to 1890 here, long before the professional teams in Cleveland were founded. As we know the rivalry eventually gave way to the federation of the mascots’ two parent schools, to form CWRU.

For two years following the merger, the two schools still played as Case Institute of Technology and Western Reserve University, even playing against each other. The rivalry still existed but sports became the unifying factor between the previously separate student bodies in the following years.

“I sit in the President’s box at the football games with visiting alumni,” said Assistant Athletic Director for Development Gary Pillar, “they will joke with each other, but no matter Case Institute of Technology alum or Western Reserve alum they come together to root for the Spartans.”

“They realize that the schools, while both great, are better together as one Case Western Reserve,” said Pat Kennedy, associate athletic director at CWRU.

The students of the past, however, didn’t always join together for school spirit. The Captain’s Council, captains of the athletic teams, and our predecessors here at The Observer sponsored a contest to name the merged Case and WRU teams. There was no response to the contest. It is contested if the football team or the Captain’s Council eventually chose the name Spartans.

“No matter Case Institute of Technology alum or Western Reserve alum they come together to root for the Spartans.” –Gary Pillar

The modern Case Western student is more driven, more intelligent and more dedicated than ever before.

“Students here have their checklist for their college experience,” said Kennedy, “They do athletics, whether it be varsity, club or intramurals because it fits into their plan. Attending games isn’t necessarily part of their overall plan toward a career or high education.” Students here have created hundreds of amazing programs and groups. However this events lack a sense of entire campus community, a lack of spirit, a lack of Spartie.

Also, the existence of so many events means a lack of knowledge about many of these events. So many programs happen at the same time that they spread the student body thin, further adding to the cycle of low attendance and low community spirit.

“I think if the students actually knew about a lot of the games or if there were any events going on during the games that might encourage students to be excited to be there, then we might have a few more students,” said Person.

CWRU students are proud of their accomplishments in and out of the classroom and have worked hard to see those endeavors come to fruition. They put a lot of effort into their plant. They have pride in their school. This pride doesn’t relay itself into school spirit. If there is no spirit, how could Spartie be there? So where is Spartie? Where is the spirit?

This lack of spirit, this missing Spartie, has been addressed in part by a Student Affairs Presidents Advisory Committee headed by Lake and by Crystal Sutton, the Assistant Program Director in the Student Activities and Leadership office. This committee started their work by addressing the difference between pride and spirit.

“Pride is that feeling of contentment students have within them,” said Lake. “Spirit is the outward expression of that pride.”

Students here seem to have trouble expressing that pride as spirit. Many groups are now working on this dilemma. One possible cause is the fact that a lot of our pride resides in our work, rather than our institution.

“People seem like they have more pride in their micro-community than their macro-community,” said Lake, “at least they express more spirit in them.”

Students here seem to have trouble expressing that pride as spirit.

To change this, student affairs has been working on breaking down barriers between groups. Lou Stark, the vice president of Student Affairs has made it a top priority to build a sense of community, by encouraging working cross divisionally across offices and eventually across student groups.

“We want to break down the separation and be deliberate in working together,” said Stark.

These efforts include the new projects on campus like the Tink, the Wyant Center, and the ongoing Uptown development bring people together. The effort for homecoming groups like UPB and COC have put forth in bringing people together, starting at the class level.

“We want to create and community and make sure that all voices are heard,” said Stark, “One way to do that is to encourage student groups to work together, supporting each other. It makes for better, bigger, community building events.”

As for the athletics department, they are student-minded.

“We aren’t concerned with how much money we make in ticket sales,” said Kennedy. “We are here to provide a better student experience. We are here to present as many options as possible for you, the student. It is up to you to choose to participate.”

Athletics is also looking for ways to create the “game day” feeling associated with other schools; the buzz of excitement the accompanies Greek Week or Springfest on campus.

People are working to help find ways to show off that spirit and build community. Case Western has made a lot of progress.

“There are more students with CWRU across their shirts than when I started here 25 years ago; there is more pride.” –Pat Kennedy

“I think there has been a vast improvement from year to year since we have been here at the basketball games,” Person said. “We get a large crowd at the friday night games.”

The pride in Case has grown as well. “I can’t prove it numerically,” said Kennedy, “But there are more students with CWRU across their shirts than when I started here 25 years ago; there is more pride.”

So where is Spartie? He is present when there is school spirit. The pride is there and with work, the spirit will come. That school spirit will be on full display this weekend for homecoming, and with a full campuswide effort both at sporting events and not, we just maybe might be seeing more of him and our spirit.