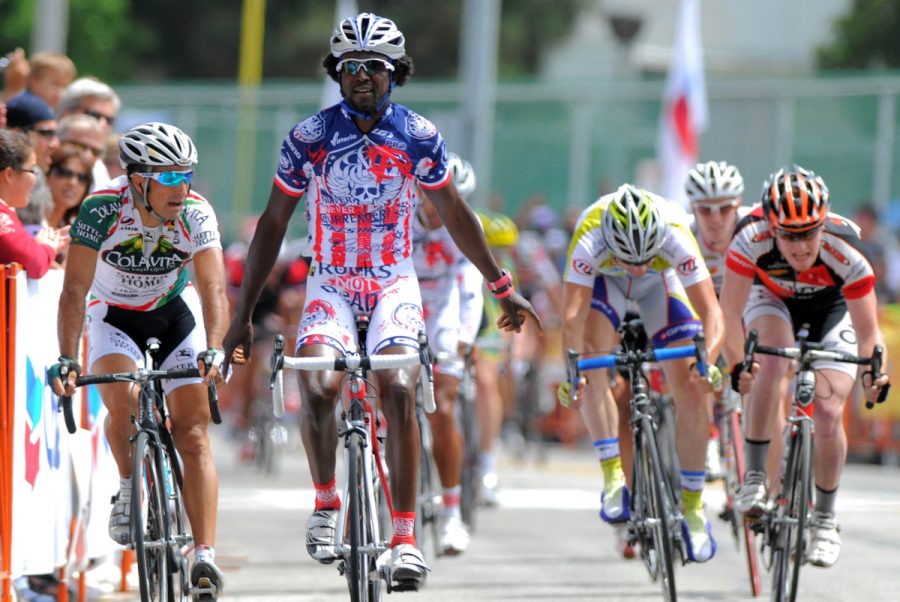 Rahsaan Bahati outraced his competition to win the Manhattan Beach Grand Prix in 2009.

Zwift, the interactive online cycling and running training app, recently announced the launch of its Black Celebration Series (BCS). The commemorative series, which began this February, consists of events for all members of the cycling community to celebrate “the history, athletes, heritage and joy the [Black] community brings to Zwift from around the world.”

The events are group rides or runs, all of which follow routes around New York City for 60 minutes. Every day except Sunday, there are anywhere from two to seven BCS sessions Zwift members can participate in.

Zwift’s initiative underlines what any casual fan or hardcore cycling enthusiast can notice with a cursory glance at a professional race: almost every single rider is white.

In the current day, most major sports leagues, such as the NBA, the NFL and FIFA, have transcended racial boundaries, with diversity being prevalent across the board. Road cycling, however, has not reflected that progressiveness.

Although cycling legend and barrier-breaker Marshall “Major” Taylor became the first African American to win a cycling world championship in 1899, there was not a Black racer in the Tour de France until 2011. Even then, only one member out of the entire 198 racers was Black; one out of 198.

Moreover, following the Black Lives Matter protests throughout 2020, there has been little to no response from professional cycling organizations regarding racial inequality in the sport.

So why aren’t there more professional Black cyclists, especially in this modern era where there is a significant global push for diversity and inclusion in all realms?

The problems begin with the insufficient cycling infrastructure in communities of color.

First, many communities of color do not have access to cycling stores. In large cities, most bike shops are in the wealthier zip codes, while there are considerably fewer ones in neighborhoods housing people of color. In Boston, for example, neighborhoods like Dorchester, Roxbury, Mattapan and Hyde Park have only two bike stores between them. In comparison, there are roughly 20 bike shops in the neighborhoods of Cambridge and Somerville.

According to Noah Hicks, the owner of a bike shop in Boston, more people are not opening bike stores in communities of color because “You have to have access to funding, which a lot of people from [Black communities] do not have.”

Areas with higher percentages of people of color also have a lower distribution of biking facilities, such as protected bike lanes and safer roads. As a result, people of color are averse to cycling because they believe it is not safe.

The data supports this fear. An analysis by the Los Angeles County Bicycle Coalition showed that areas with the lowest median household income had the highest number of bicycle and pedestrian crashes.

The increased hazardous interactions between Black cyclists and drivers also leads to more confrontations with local law enforcement. In addition, racial profiling strategies adopted by the police have augmented Black and other minorities’ reluctance to bike. A study conducted by Charles T. Brown and James A. Sinclair from the Alan M. Voorhees Transportation Center found that “the perception among Black and Latino males of being a police target in the past likely increases fear of future profiling … For many, bicycling felt like an activity that simply makes one too vulnerable to be worth it.”

Research done by Melody Hoffmann and Anneka Kmiecik on bicycle citations and arrests in Minneapolis found that there were higher rates of incident reports filed against Black cyclists compared to white cyclists. This trend was also prevalent in Tampa and New York City.

These communities of color are generally unable to advocate against this racial discrimination. Based on the results of their study, Brown and Sinclair believe that “the issue of profiling is exacerbated by lack of political power. [Residents] in marginalized neighborhoods may feel unheard and fearful, even if they do bring up the subject of profiling.”

The instances of structural racism in Black and minority communities described above are the initial barriers Black cyclists encounter in the sport. As these riders look to transition towards professional racing, they are met with a new set of hurdles.

For budding pro cyclists, the lack of visual representation in professional cycling is a deterrent. Keith Harris, an amateur black cyclist, said in an interview with Eurosport that “[Professional cycling] was never even a consideration for me, I was only ever a leisure cyclist, but having no representation in elite cycling would definitely make you feel like you might have one extra hurdle to overcome if you wanted a career in cycling.”

Yewande Adesida, an African cyclist from the UK, echoed similar sentiments, telling Diversity Report that “I have been very aware of the lack of other black riders, especially when it came to racing. My intention was always to race, but not seeing anyone that looked like me and the lack of role models made me question whether I was in the right sport.”

At the professional level, Black cyclists are alienated and held to altered standards because of their skin color. Erik Saunders, a former road racer who spent years on Continental squads in the early 2000s, agreed that racism influenced not only his career but also other’s perceptions of his abilities.

“One hundred percent, things went certain ways because I wasn’t taken seriously as a cyclist because of my race [and] ideas that others had about me,” Saunders said in an interview with Cyclingnews. “Racism isn’t isolated to cycling—it’s intertwined in life—every single day, racism.”

Saunders also relayed that the microaggressions cyclists of color experienced limited riders’ success in the same way that doping does.

“It’s like doping in that it changes the result, and you’ll never know what was true or false, what could have been—you know it makes your job harder and you accept that ceiling.”

Being seen as an outsider also results in Black and minority cyclists losing career-boosting opportunities. In 2006, African American rider Rahsaan Bahati managed to earn himself a tryout with the Union Cycliste International (UCI) Continental team, TIAA-CREF. Bahati threw himself into the training, but the learning curve was incredibly steep and he struggled with the load. He was cut from the team soon after. When talking to Cyclingnews, Bahati attributed his short stint to racist attitudes.

“At the time I thought I should have had equal opportunity to progress but it was one shot, you miss, you’re done. Others had multiple shots. When you see it firsthand, there’s no other way to look at it unless you’re in denial. Why did you give up on me so quickly? You knew what I was capable of … My dream was to race in Europe and I didn’t get that opportunity.”

Bahati believes that these reduced opportunities harm efforts to implement diversity in the sport and can have long-lasting impacts on the Black cyclist communities.

“There are a small number of Black riders racing bikes. If John Smith isn’t selected for the team, his race is still represented. But if you isolate it to us, we’re a small number, now you can see the impact to a whole generation of Black cyclists.”

There has been some recent movement in the cycling community to address these issues. Africa’s first professional cycling team, MTN-Qhebeka was assembled and entered the Tour de France for the first time in 2015. The team’s goal was to provide an accessible route to professional cycling for emerging African racers.

The team was quite successful in their first Tour de France attempt, in which African rider  Daniel Teklehaimanot wore the King of the Mountains jersey for four stages. Over the years, the team’s performance steadily improved and their confidence to succeed on cycling’s grandest stage started to bloom.

This ideal situation, however, did not last long. When the team changed sponsors, the team’s maintenance costs rose, and they faced augmented pressure to maintain their status as a World Tour team. The original motivation to encourage and develop African cyclists, as a result, eroded away.

The team, now known as Qhubeka Assos, is composed mostly of European riders. Of the 37 riders, seven are from African countries.

Although Qhubeka Assos were not completely successful in maintaining their Black and minority-inclusive agenda, their actions were certainly a substantial step in the right direction. There is an expanding group of allies and supporters for this movement. Yet, there are still a multitude of changes that must be made to help bridge the gap and make cycling more diverse.

For true change to take effect, people need to listen to what Black cyclists are saying about their experiences. This can open people’s minds to challenge their own perceptions and question professional cycling’s power structures.

Incorporating Black and minority voices into cycling’s governing bodies will aid in this process. Organizations like the UCI, national cycling programs and cycling event organizers can expand their boards and create new positions to make this happen.

Cycling teams and recruiters should also invest in strategies to create easier pathways into the professional sport for Black cyclists. So far, the infrastructure in place has been unable to effectively locate cycling talent in Black and minority communities.

USA Cycling recognizes this flaw and has focused on introducing the sport to youth from various racial backgrounds through programs such as Outride. The organization has also created a Diversity, Equity, and Inclusion committee with the aim to eventually have a team that is truly representative of the American population ready for the 2028 Olympics in Los Angeles.

Local governments can support Black and minority cyclists by taking measures to improve road conditions and increase the number of biking lanes in communities of color. Not only will this drastically reduce fatal accidents and enhance safety, but it will also motivate more people from these minority communities to take up cycling. A wider participant pool from minority communities will do wonders for inclusion and representation in the future.

“Cycling needs to come together,” Saunders said. “There needs to be leadership. We never had to be vocal because it never touched home. Now it’s worldwide. It’s time for these [organizations] to take a stance and say, ‘this is what we represent.’”