“Whistling Vivaldi: How Stereotypes Affect Us” chosen as the 2015 common reading book 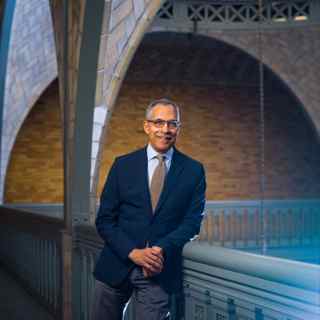 Claude Steele is an author, social psychologist and executive vice chancellor and provost at the University of California, Berkeley. His book about combatting stereotypes is the common reading book for the fall of 2015.

Brent Staples whistled Vivaldi and other classical music as he walked down the streets of Chicago as a young African-American graduate student, hoping to combat the negative stereotypes that he saw on some passerby’s faces. Today, Staples’ story is the inspiration for the title of the 2015 common reading book, “Whistling Vivaldi: How Stereotypes Affect Us,” by his friend Claude M. Steele.

Steele is an author, social psychologist and executive vice chancellor and provost at the University of California, Berkeley. His book, published in 2010, will be required reading for all first-year students as a part of the SAGES program. Steele will also speak at the Elaine G. Hadden Distinguished Visiting Author/Common Reading Convocation Speaker on August 26 in Severance Hall.

“This book is about what my colleagues and I call identity contingencies—the things you have to deal with in a situation because you have a given social identity, because you are old, young, gay, a white male a woman, black, Latino, politically conservative or liberal, diagnosed with bipolar disorder, a cancer patient, and so on,” writes Steele.

“It’s important to stress that everybody experiences stereotype threat in some way or another because we’re all members of one group or another that is negatively stereotyped in society,” he added in a PBS “Frontline” interview. “You could imagine a group of males talking to women, for example, about pay equity. The men might experience a sense of being threatened by the male stereotype, that they could be judged in terms of that stereotype or what they say could be interpreted that way….It might cause them to avoid that kind of situation or maybe to make slips of the tongue that would be embarrassing in that situation. That’s an example of how it can affect, and does affect, everybody.”

Diversity has been a frequently talked about issue on the Case Western Reserve University campus this semester, with the #webelonghere movement, the racist graffiti in Fribley Commons and the proposed addition of the Undergraduate Diversity Collaborative (UDC) to the Student Executive Council (SEC).

“Amid recent tragedies and injustices in our city and our nation, we have seen a groundswell of concern and activism among students, faculty and staff concerning issues of inclusivity, diversity, race and racism,” said Timothy Beal, the Florence Harkness Professor of Religion and chair of the common reading program in a press release. “Hoping to encourage such engagement, the selection committee worked with the president and other campus leaders to find a book that could help foster serious conversation and self-reflection about how to become a more inclusive community. We believe ‘Whistling Vivaldi’ will do just that.”