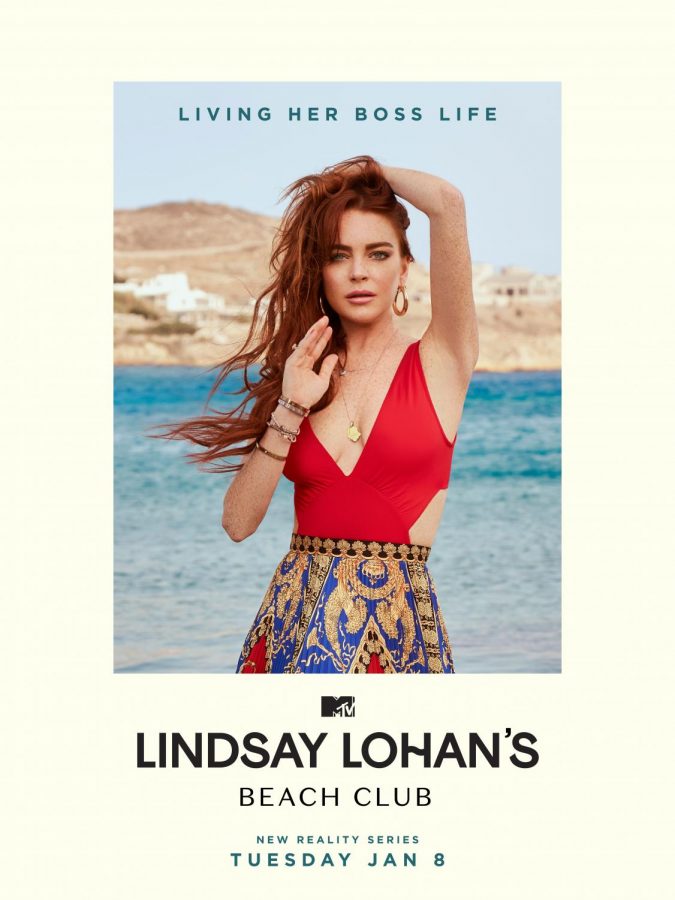 Once it was announced, I knew I was going to watch “Lindsay Lohan’s Beach Club.” As Lohan has retreated from public life in recent years, the MTV reality show offered the chance of catching up with this once-familiar face. It promised the type of uncanny first-hand access to the celebrity and celebrity-adjacent spectacle offered by a Kardashian or a “Real Housewives” franchise. I was immediately sold.

The premise is simple. “Lindsay Lohan’s Beach Club” is essentially “Vanderpump Rules” but instead of Lisa Vanderpump lording over a restaurant, the menacing boss role is filled by Lohan overseeing the daily operations of a beach club in Mykonos, Greece. And instead of contrived drama supplied by restaurant employees, it comes courtesy of a group of young Americans “handpicked” by Lohan and her business partner Panos Spentzos to serve as the club’s “VIP hosts.”

The VIP hosts’ roles are left—likely intentionally—vague and ill-defined. The job seems to be part bottle service, part brand VIP host and part host/hostess. But for the most part, the VIP hosts’ main responsibility is to look hot while breezing through the beaches and nightclubs in Mykonos, all while constantly being pumped with alcohol and plugging Lohan Beach House.

It’s undoubtedly a strange assignment for the cast but ultimately unimportant. The cast is part of a game, and they understand exactly why they are there. By episode four, which supposedly takes place a mere week after the VIP hosts arrive on the island, they have already been given two days off. They use this downtime to go to clubs, hook up and get into fights with one another.

“Lindsay Lohan’s Beach Club” would not exist without the machine that made Lohan: the fascination with fame and the people who propelled her to the previous apex of her celebrity. The VIP hosts tend to be transparent about their motivations for joining the show with most wanting to promote their personal brands. They want to skyrocket their social media following or to gain clout to open their own clubs once they head back home.

While the VIP hosts have their sights securely set on building fame, Lohan seemingly wants to use her time on the show to help steer the VIP hosts in the right direction. Additionally, the show is helping to unveil the mental and emotional damage done by the tabloid culture that targeted Lohan and similar young stars.

Lohan reveals that she chose to open her club in Mykonos only after her ex-fiance, Egor Tarabasov, assaulted her on the very beach where the property now stands. The incident was captured by paparazzi, and the photos made their rounds on the internet.

Lohan insists she’s left the incident in the past, and she is now laser-focused on making the club a success. The show aggressively pushes the narrative of Lohan being the steely boss, happy and thriving in her new home and career. However, it’s clear that the club is a result of, and will likely always be associated with, a place of immense pain and humiliation for Lohan.

This is the most frustrating thing about the trashy reality show “Lindsay Lohan’s Beach Club.” It comes so close to being something more. Take for example, VIP host Mike—all VIP hosts are known as and referred to exclusively by their first names. He is a bartender from Los Angeles who articulately and patiently explains the fluidity of his sexuality to the cameras, as well as to his housemates. The show, of course, simplifies his entire experience to a much easier to digest reality TV premise: which of the mixed-gender housemates will Mike hook up with? Will it be hunky Alex or blonde bombshell Jules?

No part of my world will change with learning the answer to this question. Yet, I desperately wanted to know if Mike would hook up with hunky Alex or blonde bombshell Jules. I audibly gasped when Mike and Alex started drunkenly making out at a club, despite Alex spending much of his screen time talking about how he misses his boyfriend back home.

But, in keeping with the breakneck pacing “Lindsay Lohan’s Beach Club” very liberally employs, this major storyline is soon eclipsed by another. VIP hosts Jonitta and Gabi are at odds because Gabi greeted Jonitta’s date by kissing him on both cheeks. Gabi’s argument is “that’s what they do in Europe.” Jonitta rebukes her to not be thirsty.

Here’s the thing: No matter how far the human race advances, I will always fall for the inherent shock and entertainment value of a reality TV fight. There is the undeniable appeal of watching two people who are smart, capable and level-headed in any other situation come to physical blows under the surreal pressure-cooker environment of constant producer prodding and camera surveillance.

In that beautiful and lively seaside villa that somehow still feels cold and artificial, in that villa ostensibly funded by Lohan herself, Jonitta smacked Gabi in the face. And I loved it.