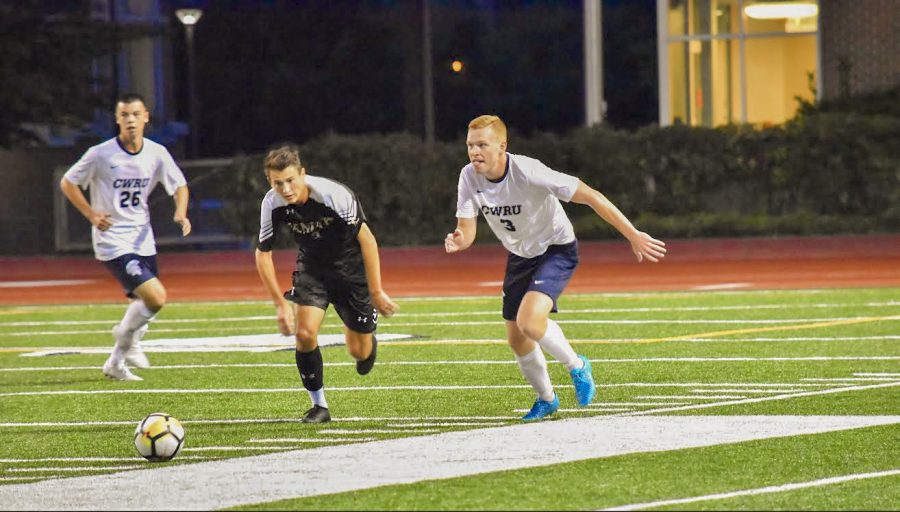 Although the next season of Game of Thrones won’t premiere until the spring of next year,  third-year midfielder Garrett Winter let the Geneva College Golden Tornadoes know that winter was coming.

The Case Western Reserve University men’s soccer team had a strong showing this weekend, with a back-and-forth 4-3 victory against Geneva and blanked Oberlin College 3-0 on their own turf.

Third-year midfielder Brian Woo opened the match with an attempted shot in the first minute. The team bombarded the opposing fourth-year goalie Luke Nolan with a total of five shots in the first 16 minutes, and the opposing keeper saved just three. A pass to fourth-year forward Alex Besl dragged the goalie out of the box, but third-year midfielder and forward Zachary Senft intercepted the pass and lofted the ball over the goalie for the first score of the game.

But that wasn’t enough for the Spartans. The team continuously pushed the ball and attacked the keeper, with Senft taking three shots in the five minutes after his first goal. First-year midfielder Sean Atwater also attempted a shot but was blocked by the Tornadoes’ goalkeeper. The Spartans did not allow Geneva to attempt a shot in the first half, playing with more control and maintaining possession of the ball.

In the second half, Geneva came out more aggressive, pushing the pace on both ends of the field. After a close miss off the crossbar by second-year midfielder Nevo Ziv, the Golden Tornadoes pushed the ball on the breakaway, leading to their first goal of the game. The Spartans attacked immediately but did not score with two headers and three corner kicks. Second-year defender Nathan Eckberg found Winter with a long pass, and Winter took back the lead with a high shot which landed in the top left corner of the goal, out of the keeper’s reach. Geneva responded with a far shot into the goal. In response, second-year midfielder Connor Weber connected with second-year forward Seldon Magruder for a header into the goal on a thirty-yard pass. Yet again, Geneva scored another goal off a breakaway.

“Geneva was a very hard-working team… It was a good challenge to play an opponent like them,” Senft said.

Tensions remained high during overtime, as the teams controlled the ball for longer periods of time and lingered on corner kicks. After some lofty passing from the Spartans, Ziv found Winter in the middle of the field with his back facing the goal. In one motion, Winter stopped the ball, turned and took a high shot aimed directly at the top of the goal over the opposing keeper, who was standing too far in front to reach the ball. The team and bench immediately ran and collapsed onto Winter. Even first-year goalie Jakob Dunn galloped onto the field on his crutches.

Recollecting on the moment, Senft said, “We know we’re capable of doing something special this season.”

The Spartans took the momentum from their win into the second match of the weekend. The team did not allow the drizzling rain to burn out their fiery spirit, as Winter blitzed through the defense for the first goal in the fifth minute of the game. Three minutes after, Eckberg scored a header off a corner kick by Weber, which deflected off an Oberlin defender into the goal.

He said, “[Oberlin] liked to hold the ball a lot, so we just waited until a certain distance to push the ball…great tactic by coach.”

First-year goalie Charlie Fink was vital on defense, saving all six shots by Oberlin. The Spartans would hold the 2-0 lead until Senft dodged Oberlin defenders at the endline and scored at the 78 minute mark.

The team beat John Carroll University 2-1 on Wednesday, Sept. 12 in overtime and will return to DiSanto Field on Saturday, Sept. 15 to face Capital University.