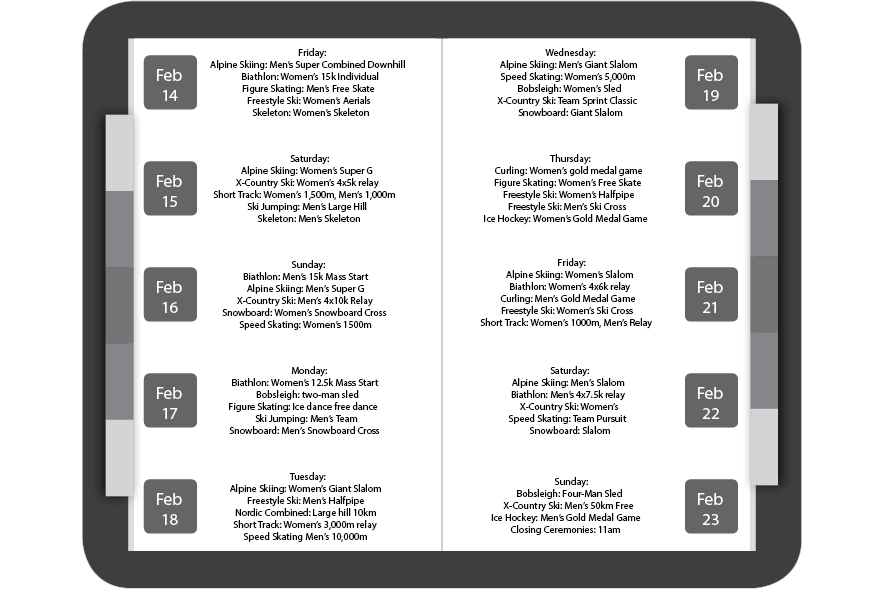 With the start of the Winter Olympics in Sochi the entire world has turned its focus on the southern Russian city as the world’s greatest athletes compete for gold. All that focus leads to millions of stories about every athlete, every sport, every country, every moment.

Every four years a majority of the world remembers that there are sports other than the typical soccer, basketball, baseball, football, and hockey. The winter Olympics reminds us that there are talented athletes who spend years training for figure skating, luge, bobsled, alpine skiing, nordic combined, and “that one where they ski and shoot at the same time”, its called biathlon.

With so many stories from these games there is no possible way to cover every aspect of this amazing two-week long event. However a few stories stand above the rest. The Americans won gold in the debuts of both men’s and women’s slopestyle snowboarding. The first women’s ski jumping events were held this year as Olympic sports. Two-time Olympic medalist Shaun White failed to medal in halfpipe. Norway currently leads all medal counts. The Jamaican bobsled team has returned to compete in the two-man event.

The opening ceremony was a fantastic show, highlighting the unique history of Russia, one of the snowflakes that turned into the Olympic rings failed to open however. India, is now able to compete under its own flag, after having to enter the opening ceremony under the IOC flag due to a discontinued Indian Olympic Committee. The fraudulent elections led the IOC to shutdown the Indian Olympic Committee until new elections were held. The elections were on Sunday leading to the reinstatement and the ability for Indian athletes to compete under their own flag. Bob Costas, who many know only for his Olympic coverage, has had an eye infection and has taken a few days break to recover. This is a big deal since Costas has covered every Olympics since 1988. These are just the tip of the iceberg of the Sochi coverage as the games continue for another week.

There are also many issues surround the games, from gay rights, to some of Sochi’s incomplete facilities, security concerns, and poorly designed courses. However it still comes down to the athletes, the focus of the world is with the athletes who have spent years of relative obscurity to now show their talent with the whole world watching. The problems with the games will be forgotten, and the victorious will be enshrined in history. So in the spirit of the games, find some time to sit down this next week and find a sport that you have never heard of, or at least have never understood – one of those “is that really considered a sport” events- and cheer on your home nation’s team to victory.