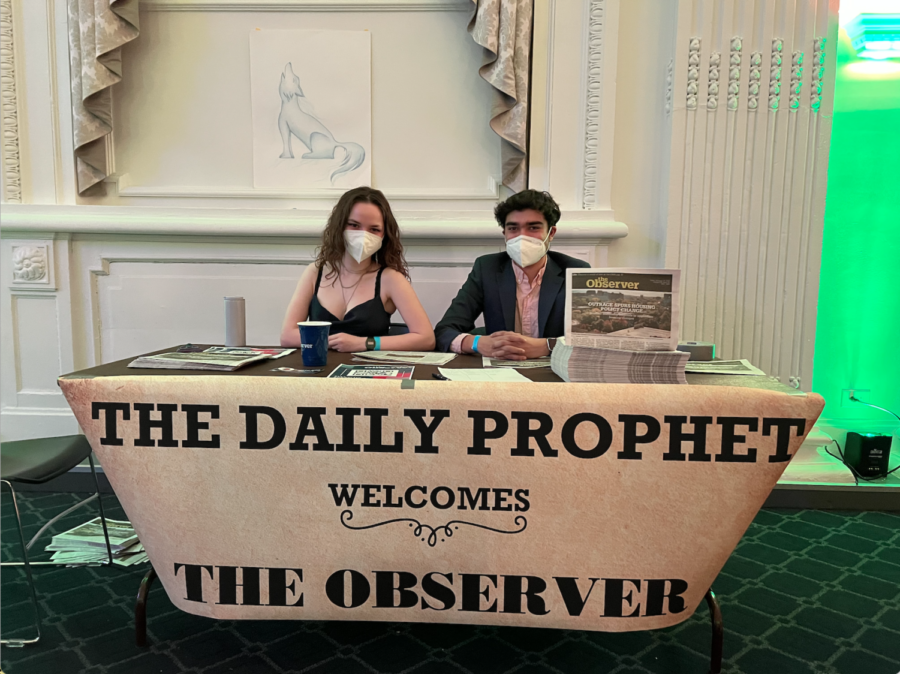 The Observer's director of print (Sara Khorshidi, left) and executive editor (Shreyas Banerjee, right) table at this year's Yule Ball, posing as the Daily Prophet from the "Harry Potter" series

This year’s Yule Ball—an homage to the winter season and Harry Potter—was as festive as ever, despite an unexpected rescheduling due to snow days. Hosted by the CWRUcio Quidditch Team in the Thwing Ballroom, it featured performances from CWRU Swing Club, Nritya and Spartan Tappers, as well as tables for multiple clubs that advertised their own wizarding-themed activities. However, the spotlight of the event was the traditional Quest, which invited guests to solve an escape room-esque Hogwarts mystery.

Starting at 8 p.m., the Yule Ball quickly came to life. Guests dressed formally, in wizarding attire or a unique mix of both. Shortly after, the CWRU Swing Dance club took the stage in pairs to showcase several dance numbers. Following them was the Nritya Dance Team which performed in traditional attire. Finally, the Spartan Tappers took the stage and ended the entertainment portion of the night on a high note.

Following these performances, guests were free to engage in the activities at the ball as they liked. Many opted for the highlight of the night: the magical Quest. So many joined that the line began to snake up the third-floor staircase.

First-year Jared Hausman shared some insight on the ins and outs of this event, as well as his feelings about it: “There were 3 challenges for the Quest, which had us searching for 3 of Voldermort’s Horcruxes. After we collected all three we met with Dumbledore and used the Sword of Gryffindor to destroy the Horcruxes. It took about 30-45 minutes to do it and it was a lot of fun.”

A couple of hours later, food and refreshments were offered to guests, which consisted of bagel bites, chicken nuggets and fries for snacks, pumpkin-flavored pastries and cupcakes for sweets and the infamous Butterbeer—the non-alcoholic drink featured in many Harry Potter stories.

Throughout the event, clubs and service fraternities ran promotional tables, including Alpha Phi Omega which exhibited some of their current philanthropic projects for women. Adjacent to them, CWRUcio Quidditch displayed a table discussing their namesake sport—albeit modified for Muggles. On the other side of the room, Writers Writing Words held a table that let you create your own quill. Finally, our beloved Observer—posed as the Daily Prophet—held a table of its own, handing out merchandise and copies of the latest issue. In addition, Alpha Chi Sigma displayed some interesting science experiments, and Case Juggling Club had magic tricks of their own, offering to teach passersby the basics.

This event showed the true spirit of our student body in their creativity and diversity of interests while also offering a safe and fun environment. However, all good things must come to an end, and by 11 p.m. Yule Ball was officially over, leaving guests fulfilled and excited for next year.