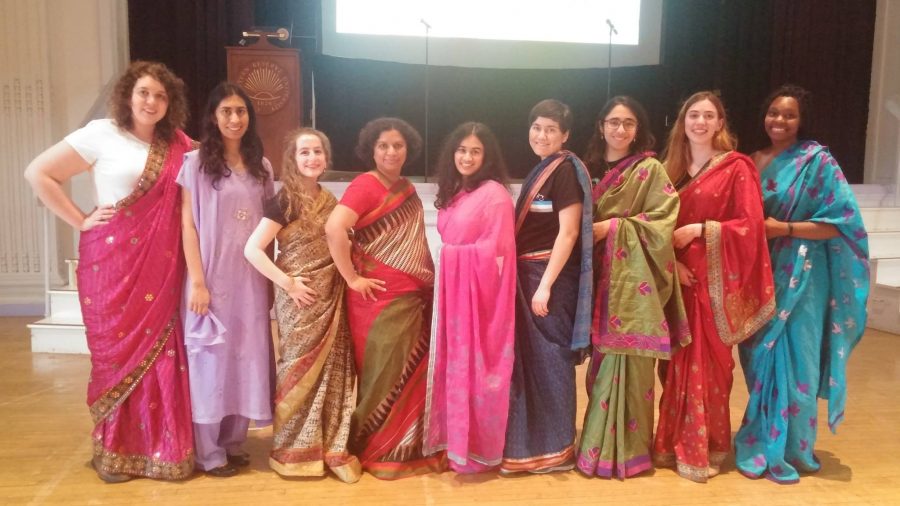 After a year of samosa sales in Nord Hall, Women in Science and Engineering Roundtable (WISER) concluded their 2016-2017 campaign of benefiting a school in India with a banquet on Thursday, March 30.

Held at the Thwing Center Ballroom, WISER’s SEVA Banquet was the group’s final fundraiser for the year. The banquet commenced with a keynote speech by Rekha Srinivasan, a WISER faculty advisor. Called Dr. Sri by many, Srinivasan first introduced the Nurture a School Annually program to WISER members in 2010, and since then, the organization has supported 6 schools in India.

Srinivasan began her speech with a general review of the charity program. WISER works with a non-profit organization, Soujanya Sevashrama (SEVA), on the Nurture a School Annually program. Srinivasan explained that the name, SEVA, means service in Sanskrit.

“No matter what you achieve in life, if you don’t pass it on, its meaningless,” she said.

According to Srinivasan, the development of private schools in India is very important and beneficial to India teenagers. While the public school system in India is still developing,  some of the only private schools available to students from lower socioeconomic backgrounds lack proper funding and accommodations as well.

Recalling her own education experience in India, Srinivasan said, “I am standing here, speaking in English with the ability to speak five other languages because I was privileged enough to go to a private school in India. Had I gone to a public school, I would not have had all these opportunities.”

Srinivasan pointed out that infrastructure in many Indian schools is outdated, while there is limited funding for these schools to invest in new infrastructure. Some schools do not even have separate bathrooms for girls. Therefore, Srinivasan stressed that support from the attendees, even just for a few dollars, is very important.

“[To us] two dollars selling samosas may seem nothing,” said Srinivasan. “However, to buy, for example, a pair of shoes, is 80 rupees, which is one dollar and 25 cents, so every cent, every dollar you give really matters.”

After Srinivasan’s speech, attendees then enjoyed some Indian dishes and performances by several campus organizations such as Case Men’s Glee Club and the CWRU Juggling Club. The event attracted around 50 people, some of whom were prospective students who visited Case Western Reserve University.

“I am really happy with the turnout,” said Jodie Makara, the WISER SEVA outreach coordinator “At the beginning I was counting like 30 people and then more showed up… and most people stayed till the end today.”
The banquet concluded WISER’s year long campaign of fundraising for the Indian school it supported. The money collected from ticket sales, along with the money raised by selling samosas, amounted to over 700 dollars and will be used to purchase school tables, school bags and other supplies to students in India.