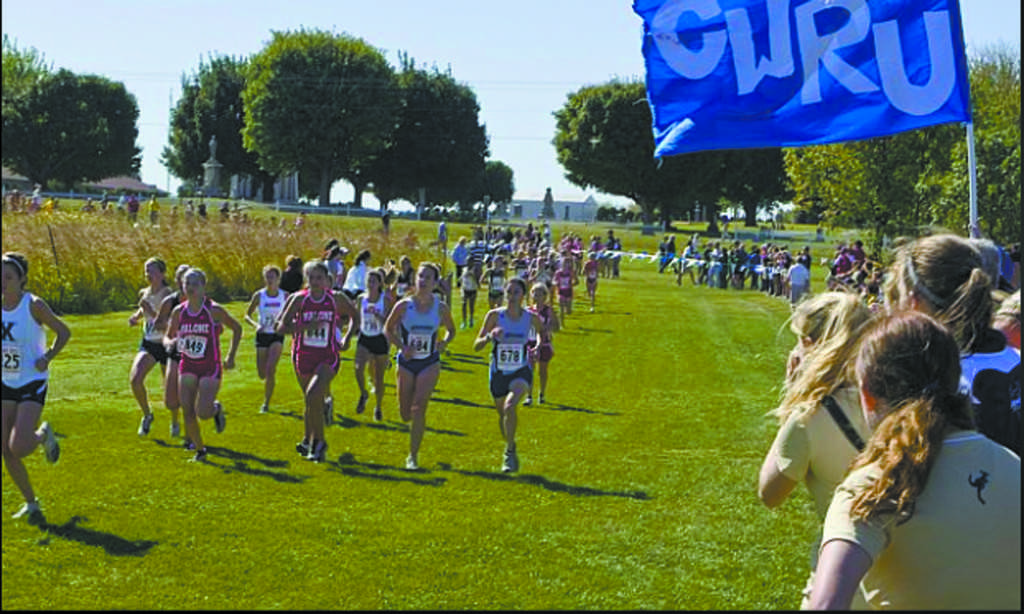 The All-Ohio Championships is an annual meet between NCAA Division I, Division II, Division III, and National Association of Intercollegiate Athletics (NAIA) schools across Ohio. Now in its 56th year, the All Ohio Championships provides teams from the area a chance to see who is the best in the state. All school sizes run in one large race, with as many as 300 racers at one time. Team scores are then calculated for each division, and state champions are crowned.

In past years, the All-Ohio Championships was hosted by Ohio Wesleyan University in Delaware, OH. The hilly course always provided a challenge for the racers. This year however, the event moved to the prestigious Elvin R. King Cross Country Course at Cedarville University in Cedarville, OH.

The Men’s Championship race was the first race of the day. The sunny, breezy Saturday afternoon spelled out perfect conditions for a cross-country course. Elvin R. King’s terrain is much different from the previous All-Ohio course at OWU. The wide trail twists around cornfields, and overall the course is notoriously level. Most of the runners expected fast conditions compared to the torturous hills and rainy conditions of past years.

The start of the men’s eight kilometer race was a quick one as the pack went out fast. The Spartans stayed together in the field of 263 runners. The seven harriers stuck together as a pack, lead by senior David Carter, for the first five kilometers. Carter then began to break away from the pack in search of Oberlin’s top two runners, who were in front of the Spartan pack. Chris Kelly and senior Robert Ontko also pulled ahead, following Carter.

In the final kilometer Kelly and Carter continued to gain on Oberlin’s third runner, but ultimately were not able to catch him. The duo finished the course in 10th and 11th place, respectively. Kelly’s time of 26:03 and Carter’s time of 26:04 were both personal records. Ontko finished in 15th in 26:09, passing Oberlin’s fourth runner, stealing a crucial point from their closest competitor.

Senior Bobby Voigt finished fourth for the Spartans in 17th place with a time of 26:16. Voigt ran hard in the later part of the race and stepped up his defense. “I really think we stuck together and ran hard against some top-notch competition” Voigt remarked on the race.

The women’s championship five kilometer race was started fast as well as Cabrera and Jeroski were running to keep pace with Oberlin’s lead runner, Joanna Johnson. The Spartans had a strong chase pack lead by seniors Andrea Fischione and Cindy Spahn. After a fast first half, Cabrera and Jeroski surged to finish in 3rd and 4th place respectively. Fischione lead the rest of the pack past the finish line and placed 15th. Freshman Brooke Simpson sprinted in the last 1000 meters to finish fourth on the team and 17th overall in Division III.

CWRU’s non-varsity squad competed in the open race later in the day, and the team post several exceptional performances. Senior Tim Smith and junior Chris Wade ran times that would have placed them very well in the varsity race. Their times of 26:43 and 27:05 respectively were both season bests for an eight kilometer race. In the women’s open race, freshman Allison Mcgee finished in a time of 20:05, soon followed by sophomore Thea Emmons, who ran an all-time personal record time of 20:07.

Tomorrow, the Spartans continue their season at the Inter Regional Rumble Cross Country Meet at Oberlin College in Oberlin, OH. Top teams from around the country will be racing in the tune up before the championship season. The No. 26 Spartan men look to race nationally ranked No. 3 Allegheny College and No. 14 Carnegie. The No. 23 women will square off against rival No. 22 Oberlin.

Both Spartan squads will be looking to beat the host school Oberlin. Oberlin and CWRU have been neck-and-neck in the national rankings all season and have raced against each other several meets this season. “We are gunning to beat Oberlin on their home course to send a message to the rest of the Great Lakes Region.” Says Carter on Saturday’s race. The Men’ 8k race will start at 11 a.m. and the Women’s 6k will start at 11:45 a.m.