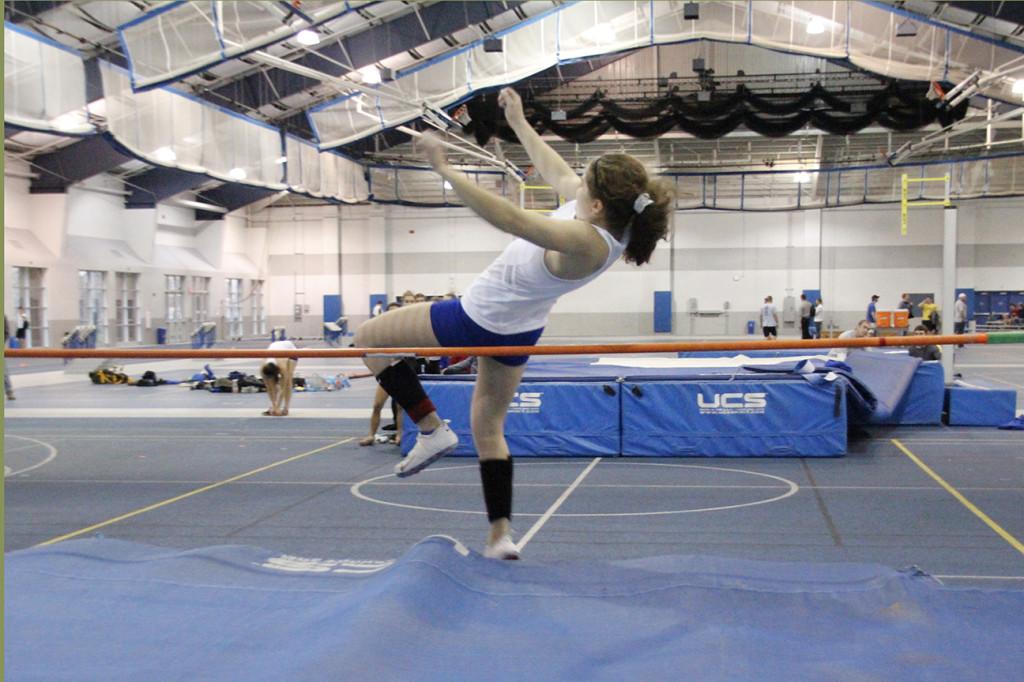 Sophomore Sophia Herzog performs the high jump. Herzog tied for the top height in the pole vault of 10.5 feet but finished second on attempts.

The Case Western Reserve University track and field teams were led by a number of top individual finishes at the 2013 Division III, All-Ohio Championship on Saturday, Feb. 9 at the Clements Recreation Center at Otterbein University.  The women placed ninth of 18 squads with 28.5 points while the men scored 30 points and ended in a tie for tenth out of 18 squads.

The University of Mount Union took home both team titles.  The women’s side won with 110.5 points, while Ohio Wesleyan University was second with 97. Baldwin Wallace University was a distant third with 65.5 points, Oberlin College was fourth, racking up 53 points, and host Otterbein rounded out the top five with 49 points.

The Purple Raider men claimed the team title with 111.5 points, while Ohio Wesleyan was a distant second with 73 points. Otterbein and Baldwin Wallace tied for third with 49 points and Ohio Northern University rounded out the top five with 48.5 points.

Case recorded the majority of its points in field events from a trio of Spartans who picked up top-five finishes. During the pole vault, sophomore Sophia Herzog and Ohio Wesleyan’s Sarah Bechtel both cleared a height of 10 feet, six inches, but Bechtel took home the event title by clearing the bar in fewer attempts. Additionally, freshman Christen Saccucci placed fifth during the same event clearing exactly 10 feet.

In the triple jump, junior Thenessa Savitsky leapt to a distance of 34’7.75″ for third. In the high jump, freshman Laurel Shickler cleared the bar with the sixth-highest height in the event, but wound up eighth due to total number of attempts.

On the track, freshman Kelsey Aamoth was runner up in the 3,000-meter run with a season-best time of 10:36.12, just under four seconds behind Michelle Clark of Denison University.

Scoring additional points for the Spartans was the seventh-placed distance medley relay quartet of sophomore Erica Bauerbach, freshmen Juliana Ross and Taylor O’Neil, and junior Brooke Simpson who finished with a time of 13:07.61.

On the track, the distance medley quartet of senior Phil Yeung, freshman Abdallah Soliman, and seniors Michael Perisa and Chris Kelly placed second with a time of 10:26.25.

Individually, Yeung and Kelly also placed fourth and fifth, respectively, in the mile run with times of 4:26.25 and 4:26.97.

Sophomore Joshua Malone took fourth in the high jump clearing the bar at 6’3.5″, while senior Nick Errico rounded out the Spartan team, coming in seventh in the pole vault at 13’11.25″.

The Spartans return to action next Friday, Feb. 15, at the Greater Cleveland College Championship hosted by Baldwin Wallace on the Harrison Dillard Track at 4 p.m. in Berea.