Women close out season with 2-1 comeback at Rochester 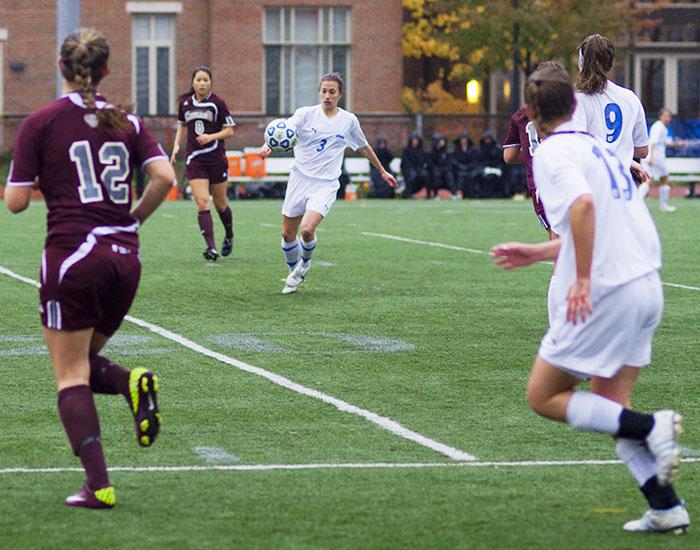 The Case Western Reserve University women’s soccer team picked up a 2-1 comeback victory in the final game of the season over conference rival University of Rochester, Saturday, Nov. 3 at Edwin Fauver Stadium. The Spartans picked up a pair of goals in the second half to pass the home Yellowjackets and clinch a tie for sixth place in the University Athletic Association with New York University.

Against Rochester, the Spartans came out a bit on edge, getting just one shot off in the opening 45 minutes. The Yellowjackets managed to get four shots off; however, the two teams would hit the locker rooms in a scoreless tie at the half.

After the half, the home team opened the scoring early on with a goal nine minutes in, as Hayley Engel punched in the rebound after Heather Alico’s shot hit the post. The goal gave the Yellowjackets the lead in the 54th minute and forced the Spartans to go on the attack.

Case found the answer to Rochester’s goal with an equalizer just 12 minutes later as sophomore Christine Straka knocked in a cross by sophomore Jessica Sabers on the left side to even the score. The score was Straka’s second of the season and the Sabers’ second assist.

Continuing to pressure the Spartans once again beat Yellowjacket goalkeeper Bridget Lang as senior midfielder and captain Deena Levey scored in the 73rd minute with the game-winner. Levey, who was named to the Capital One Academic All-District VII First Team squad last week, launched a rocket from 20-yards out to gain the lead.

In goal, freshman goalkeeper Megan Romelfanger was able to keep the Yellowjackets at bay for the remainder of the game as she improved to 5-4-3 on the season. Romelfanger had three saves on the day as she concluded her rookie season. For Rochester, Lang picked up the loss along with two saves on the day.

The Spartans outshot Rochester 14-9 on the game, including 13-5 in the decisive second half. Case also held a 6-1 advantage in corner kicks.

The Spartans have just four seniors on the roster this year, including Levey, midfielder Devyn Lee, defender Maeve Goede, and forward Alyssa Lauzau. The good news for the Spartans is that they have a strong group of young players for head coach Tiff Crooks to build around as 82 percent of the Spartans’ goal production will be returning, including Sabers, who led the Spartans with seven goals in her sophomore campaign. Case also returns the majority of its backline and will have back sophomore goalkeeper Cameron Casson, who started the initial nine games of the season before an injury sidelined her.