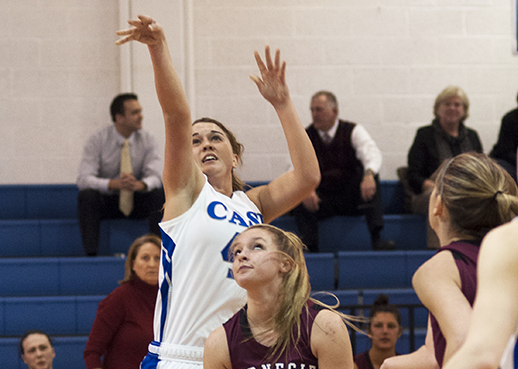 Sophomore Brooke Orcutt scores two of her 12 points in the Spartans 88-73 win over Carnegie Mellon. Orcutt was tapped for an All-UAA Honorable Mention following her performance this season.

The Spartans end the season at 16-9 overall and 8-6 in the UAA. The 16 victories are the most for the program since the 2001-02 season when the team was 20-9 overall and advanced to the NCAA Tournament. In six years under head coach Jennifer Reimer, the Spartans now have five winning campaigns.

With the loss, the Tartans finish at 13-12 overall and 5-9 in the UAA, ending the season fifth in the conference.

The association title was won by Emory University who finished 12-2 in the UAA, one game ahead of University of Rochester (11-3) and two ahead of Washington University (10-4). The Spartans finished fourth at 8-6.

Iacono was named UAA Player of the Year after the game for her dominating offensive performance that saw her lead the association with 17.9 points per game, 2.5 more than the second place player. Iacono was also named to the All-UAA first-team. Iafelice earned a second-team nod while Mueller and sophomore Brooke Orcutt earned honorable mentions.

Miles’ 22 points came via six field goals and a career best 8-for-8 performance at the line. Overall, the Spartans were a program best 20-of-20 from the charity stripe.

The three other seniors also didn’t disappoint in their final games.

Iacono tied for the game high with 23 points and dished out a game high seven assists. The two-year captain finishes her career with 1,353 points, which is good for third all-time in program history. Iafelice scored 14 points and recorded four helpers, adding to her school record assist total, which stands at 374. Mueller just missed a double-double but did finish with 11 points, nine rebounds, four assists and two blocked shots.

The Tartans then went on a 9-2 run of their own to push their advantage to nine, 31-22, with 10:23 left after Liza Otto hit a layup. Case scored the next seven to cut the deficit back to two, 31-29, following a Miles jumper with 6:33 in the half. CMU responded with an 8-0 spurt of their own and restored an eight-point lead, 39-31, with 5:18 remaining after Chandler Caufield knocked down a three pointer.

The Spartans outscored the Tartans 12-6 to close the half and trailed by two at the break, 45-43.

In the second half, the Spartans opened with a 10-0 run and recorded 18 of the first 22 overall to turn a two-point deficit into an 11-point advantage with 13:09 remaining. Miles hit six free throws during the stretch, while Iafelice hit a layup and a triple at the onset.