Women Come Out On Top! 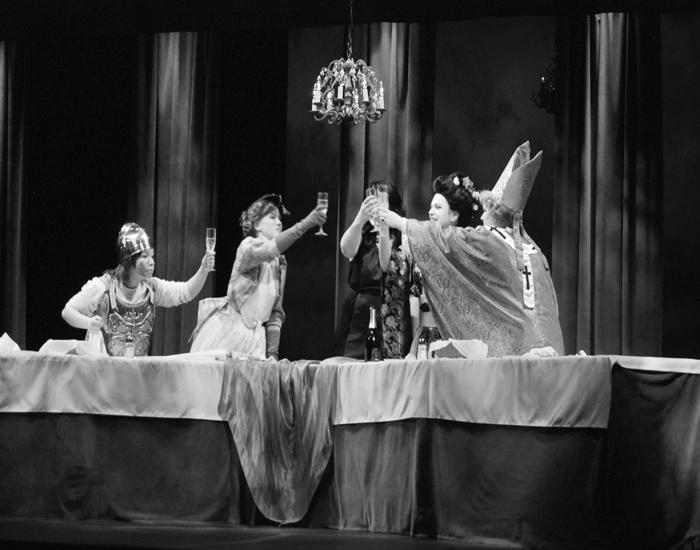 Can a woman have it all? Or, as a recent New York Times article asked, what are women willing to give up for success? Should a woman’s advancement in the workplace even be structured in such a way?

With a mixture of laughter and tears, this is the question Caryl Churchill seeks to address in her play “Top Girls.” The play follows the story of Marlene, a “ball-buster” who could easily put “Mad Men’s” Don Draper to shame, working at the “Top Girls” employment agency in Thatcher-era Britain. As Marlene celebrates her success, argues with her sister, and torments her coworkers, Churchill uses this backdrop to weave an intimate tapestry of conflict between the individualist feminism of Margaret Thatcher and its socialist critique.

Churchill was born in London in 1938. Much of her work has been influenced by Brechtian Theater, modernism, and surrealism, and “Top Girls” is no exception. The play consists of an entirely female cast. Needless to say, it is funny to see some the interactions at the Top Girls agency, as the women portray typically male roles in the office environment. Marlene herself, cold and heartless, approaches her work with an iron fist. Her coworkers are, like typical businessmen, ambitious and competitive. Thematically, this helps underscore the increasing masculization of women during the Thatcher era as all the women in the agency become infected with the Darwinian drive to succeed, even at each other’s expense.

The play has a fairly nonlinear structure which is used to enhance its thematic overtones. It begins with a surrealistic sequence in which Marlene is congratulated on her promotion by famous women from the past. As the women celebrate, they become increasingly drunk until the usual aftereffects ensue.

This act provides much of the play’s humor for the play. The audience is introduced to such luminaries as the legendary Pope Joan, whose theological ramblings pose a sharp contrast to the monosyllabic expletives of Dull Gret, who led an army of women to pillage the depths of Hell. It is during this scene that we see Churchill’s masterful artistry with dialogue: the actresses are required to eat, speak in dialect, and perform other various tasks while overlapping and intermingling the dialogue to give the impression that multiple conversations are taking place at once.

The second act finds itself mostly in the mundane office world. It follows the parallel stories of the assertive Marlene as a driven career woman at Top Girls, as well as her poverty-stricken sister Joyce whose daughter Angie’s greatest desire is to club her mother with a brick. While the second act contains its own share of humor, it is also the more poignant part of the play, in which Churchill’s thematic elements present themselves in force.

The relationship between the two divergent sisters stands out most. Joyce, who remained at home, subject to poverty and a cruel marriage, embodies a more socialistic approach to feminism and a not-so-subtle critique of the excesses of Marlene’s American-styled individualism. It also becomes apparent that Marlene may have something to do with her sister’s current state, making Joyce both a silent and vocal accuser of Marlene’s betrayals as she bears witness to the sacrifices her sister has made on her lonely road to the top.

“Top Girls” provides a modern look at contemporary issues that many female (and male) students will likely encounter at some point in their own lives. Directed by Case Western Reserve University’s own Catherine Albers and starring some of our most talented actresses, it premieres tonight, Feb. 17 at 8 p.m. with further performances on Feb.18, 23, 24, and 25 at 8 p.m. and Feb. 26 at 2:30 p.m. Admission is $7 for adults over 60 and CWRU personnel, $5 for students, and $10 for others.