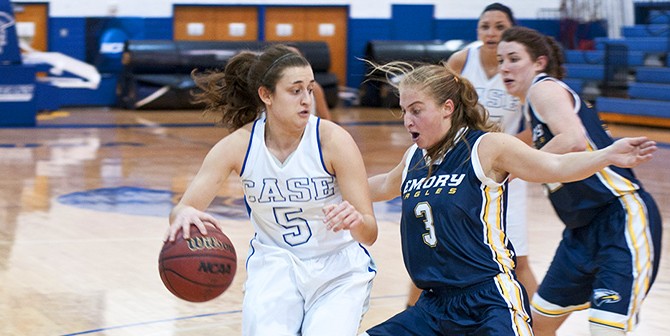 A late second half run pushed the ladies of Kenyon College past the Case Western Reserve University women’s basketball team in the first game of the University Athletic Association/North Coast Athletic Conference Challenge. Kenyon rallied with 13 straight points to grab a 55-52 comeback victory over the visiting Spartans.

In the team’s second matchup of the weekend, the women were outmatched by Denison University who ran away to a 72-59 victory on Sunday. The Big Red improved to 4-1 with the win. After earning a 31-25 halftime lead over the Spartans, the Big Red went on a six-point run to increase the lead to 12 and the Spartans never got closer than eight points from the lead.

The Spartans opened the game strong, running out to a 16-5 lead early in the first half. Case pushed the lead as high as 14 points when Mummey hit a layup to make the score 22-8. Kenyon pushed back, going on a seven point run before the half.

Coming out of the break with a 33-23 lead, the Spartans continued to manage gameplay and kept their lead for the majority of the half. Iacono hit a three-point shot to push the lead back to 10 with just under five and a half minutes to play.

Kenyon rallied, as the Spartans’ shots just wouldn’t fall; the hosts scored the final 13 points of the game. The women went 0-for-7 down the stretch including five missed three pointers, including Iacono’s game-tying attempt with four seconds left.

The problem down the stretch came from the starters, who shot 30.2 percent from the field and 27.8 percent from three-point range. The bench, however, had an impressive performance, shooting 76.9 percent. Mummey and Erin Reynolds were both perfect from the floor while Orcutt went 3-for-6.

The Spartans thrived defensively early, holding the Ladies to 29.8 percent shooting from the field and 29.2 percent from three-point range. Ultimately it was fouls that hurt the Spartans, as they conceded 16 shots from the charity stripe with the Ladies cashing in for 14 points. The Spartans only had three free throws and made just one for the game.

Iacono and senior guard Erica Iafelice both had six assists in the loss, while Brooke Orcutt provided four assists in 28 minutes from the bench.

Against the Big Red, the Spartans were led by sophomore Erin Reynolds, who hit a career-high 13 points in the women’s 72-59 loss to Denison. Reynolds shot 6-for-10 from the field with a three-pointer. Reynolds was one of three Spartans in double figures as Iacono and Iafelice had 12 points.

The Spartans were forced to play from behind in much of the game as the Big Red ran off to a 15-4 lead early in the match. Case was able to cut the lead to as little as six when Reynolds hit a layup to drop the margin to 25-19 with five minutes remaining the first half. Denison responded with key jumpers, increasing the lead back to double digits before an Iacono jumper in the closing moments brought the deficit back to six at halftime.

Denison scored the first six points of the second half and continued to keep the Spartans at bay, as Case never got within seven points of the lead.

The women are currently on a 22-day lay period which features just one game. The women will play at the College of Wooster on Saturday, Dec. 8 at 4 p.m. The Spartans will then have off for finals before picking up a game hosting Washington & Jefferson College on Thursday, Dec. 20 at 6 p.m.