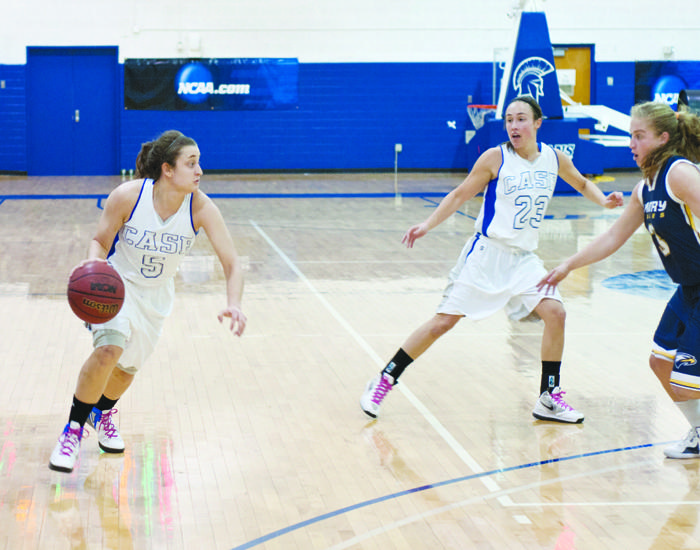 The Case Western Reserve University women’s basketball team capped the 2011-12 season with a resounding 57-43 win over the rival Carnegie Mellon University Tartans. The Spartans finished the season on a three-game winning streak, including a win over then-No. 12 ranked Rochester.

Case (15-10, 8-6) jumped out to an early lead with layups from senior forwards Erin Hollinger and Chelsea Peck in the first minute. For much of the first half, the Spartans, who were guaranteed a fourth-place finish with a win, were relatively quiet, content to trade baskets with the Tartans (3-11, 9-16), waiting for their opportunity to pull away.

With 3:47 left in the first half and the score even at 20-20, Peck took advantage of her Tartan defender and hit a shot from near the basket to give the Spartans the lead. The Spartans never looked back. Case finished out the half on a 13-3 run, which featured three three-point conversions from the Spartans and a jumper with seven seconds left.

Juniors Erica Iafelice and Marissa Miles both nailed jumpers from beyond the three-point line within a minute of each other to keep the momentum on the Spartans’ side of the court. Hollinger was fouled in the paint, but still managed to put the ball in the hoop and convert the three-point play moments later. With seven seconds left, Miles hit another jumper via a feed from Hollinger.

Junior guard Evy Iacono continued her recent scoring success, shooting 40 percent (6-15) from the field and an impressive four-for-nine from behind the arc. Hollinger finished with 15 points, just over her average of 13.1 for the season. She also had five rebounds and three assists. Peck added seven rebounds, including four offensive boards, and six points. Iafelice had a game-high six steals, which matches her season high against Baldwin-Wallace.

Coming off the bench, junior center Emily Mueller had one of her better games this season, recording six rebounds, three blocks, one steal, and four points on 2-3 shooting.

Strong bench play has been important to the Spartans this year. Among others, Brooke Orcutt, Rachel Beaty, and Erin Reynolds have contributed strong minutes, not only giving the starters a breather, but also providing a positive change of pace.

Going into the second half, the Spartans picked up right where they left off, going on a 12-2 run. A combination of three-balls put up by Iacono, free throws by Orcutt, and strong inside play by Hollinger. With 15:12 left to play, the Spartans had their largest lead of the game at 45-25.

With this win, the Spartans played into a tie for fourth place in the UAA with the University of Rochester. Fifteen wins is the highest total reached by the Case women’s team in more than five years. Despite losing team captains Chelsea Peck and Sarah Milligan, as well as Divison III Player of the Year candidate Erin Hollinger, the Spartans will look to carry on their strong performance next season.