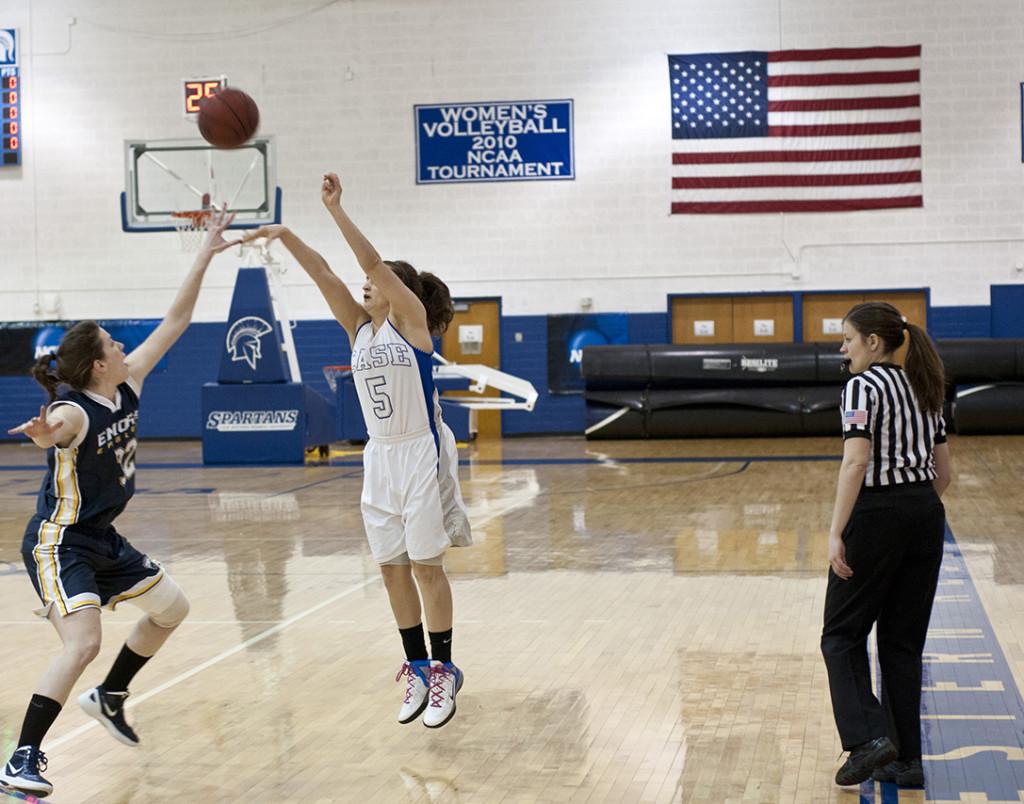 With their second-straight victory, the Spartans improve to 15-7 overall and 7-4 in the UAA. The 15 wins already match the team’s total from last season, which is the most since the Spartans went 20-7 with the only NCAA Tournament berth in program history during the 2001-02 campaign.

The win puts the Spartans within an outside shot at a share of the conference title.  CWRU will face off against the UAA’s first place teams, No. 21 Emory University (19-3, 9-2) and University of Rochester (17-5, 9-2), on their road trip this weekend.  A sweep would give them a shot at a share of the title with a win in their final home game against Carnegie Mellon University (13-9, 5-6), depending on other results around the UAA.  Washington University is also ahead of the Spartans in third at 18-4 overall and 8-3 in the UAA.

Senior guard Evy Iacono led all scorers in the contest with 15 points to go along with five rebounds and three steals.

In the first half, the Spartans opened the game with eight of the first 10 points. At the 13:38 mark, Iafelice passed Tondo on the school’s all-time assist list with a helper on a Mueller three-point field goal that made the score 8-2. Starting 0-of-12 from the field in the opening 8:28, the Judges didn’t convert their first field goal until the 11:32 mark when Angela Miller hit a jumper to bring the score to 8-4.

The visitors later pulled to within five, 12-7, on a layup by Samantha Anderson at 5:21. However, Case responded with an 8-2 run to push the lead to 11, 20-9, after Iacono hit a pair of free throws with 2:57 left before the break. Brandeis scored six of the next nine points and trimmed the deficit to eight at the break, 23-15.

Brandeis was led individually by Kasey Dean with six points and six rebounds. The Judges hit only 13 field goals in 67 attempts.

On Friday, Feb. 8, the Spartans topped New York University 89-74, on Play4Kay night as Iaefilice tied a career-high with 17 points and added eight assists.

As part of Play4Kay night, the Spartans wore pink uniforms, and all proceeds from the event will go to benefit the Kay Yow Cancer Fund.

Iafelice shot a career-best 4-of-6 from three-point range as the Spartans moved closer to the top of the UAA.

Three others scored in double-figures as the Spartans scored their highest non-overtime total of the season. Iacono finished with a team-high 23 points to go along with four rebounds, five assists and four steals. Senior forward Marissa Miles scored a career-high 16, and sophomore guard Brooke Orcutt tallied 12 off the bench.

For the game, NYU was led by Lem with a game-high 25 points, while Melissa Peng dished out a game-best 10 assists.

The Spartans leave town for the final road trip of the season beginning at Emory on Friday, Feb.15, at 6 p.m. in Atlanta. CWRU closes the trip at the Rochester on Sunday, Feb. 17.