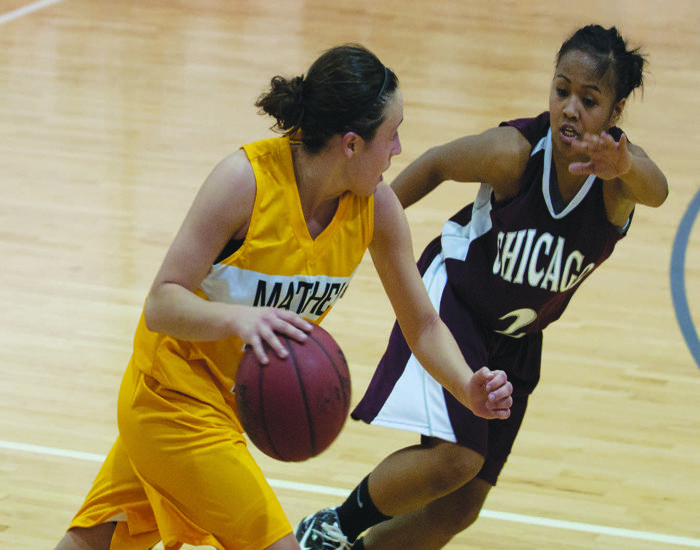 Dressed in bright yellow Mather College throwback jerseys, the Case Western Reserve University women’s basketball team put on a strong performance against New York University on Sunday, Feb. 5 for their fourth win in a row. This, and a 60-47 win against Brandeis the Friday before, brings the Spartans to a record of 12-8, 5-4 in the UAA. With the 61-54 win over New York (10-10, 2-7), as well as the win against Brandeis (8-12, 1-8), the Spartans get the series sweep against the Judges and the Violets.

It was clear from the opening tip that the Spartans wanted the win more than the Violets. The Spartans went up by five points almost immediately with a put-back by senior forward Erin Hollinger and a three-pointer by junior forward Marissa Miles. Barely two minutes in, the Spartans were sitting on a comfortable nine-point lead, having limited the Violets to a single point while forcing a multitude of poor shots and turnovers.

The Spartans seemed poised to extend their lead when they drew an offensive foul on a reckless play by New York’s Bianca Storts. When the Spartans were unable to capitalize on the change of possession, the Violets managed to get back into the game, and, by the 6:19 mark, went up four points on a series of layups. The most exciting point in the half came at the very end, when Hollinger and junior guard Evy Iacono each had huge blocks, separated by a charge drawn by the Spartans. With these blocks, the Spartans were able to head to the locker room with the momentum, despite being down a point.

One interesting technique employed by the Spartans was their situational, full-court press. Every so often after a made basket, the Spartans would switch up their defense and swarm the inbounds pass, making it nearly impossible for New York to have a clean pass. At least twice throughout the game, the Spartans managed to grab steals using this technique.

Both teams took a few minutes to get back into the swing of the game after halftime, exchanging jumpers until the 13th minute. With a free throw by Hollinger and a crucial three-pointer by junior guard Erica Iafelice, the Spartans took the lead for good. Despite keeping it close, New York wasn’t able to keep up with the superior play from the Spartan team, which saw eight players’ record minutes. The dagger came down on the Violets with four minutes left, when Iafelice hit a timely three-ball, followed by consecutive layups by Iacono and Peck.

In terms of stats, the Spartan starters seemed much more balanced against New York at home than in their away game the weekend before. The Spartans got double-doubles from Peck and Hollinger, as well as very solid play from the rest of the starters and the bench to put together a total-team effort. By winning the rebounding battle, 40-36, Case was able to get more second-chance points and tire out the Violets’ interior defense. Surprisingly, the Spartans were a meager 47.8 percent from the line. Free throw shooting has been one the Spartans’ fortes; they consistently shot over 80 percent from the charity stripe in some games earlier this year. Bet on the Spartans lining up for free throws this week in practice.

Peck recorded a double-double and played one of her best games of the year. While scoring 12 points on a 5-6 shooting night and hauling in 10 rebounds, Peck also dished out five assists and recorded one steal. On the defensive side of the ball, Peck teamed up with Hollinger to shut down the interior scorers for New York. At one point early in the second half, the Spartans were playing such tenacious defense that New York seemed to simply stop moving and trying to get to non-existent open court.

The Spartans will need every piece to fall into place for their upcoming games, as the Spartans play a score of nationally ranked UAA opponents. They travel to St. Louis to play second place and d3hoops.com No. 12 Washington University (16-4, 6-3) tonight, then head to Chicago on Sunday to play the undefeated University of Chicago (20-0, 9-0). Their next home game is Friday, Feb. 17 against No. 11 Rochester (17-3, 6-3).