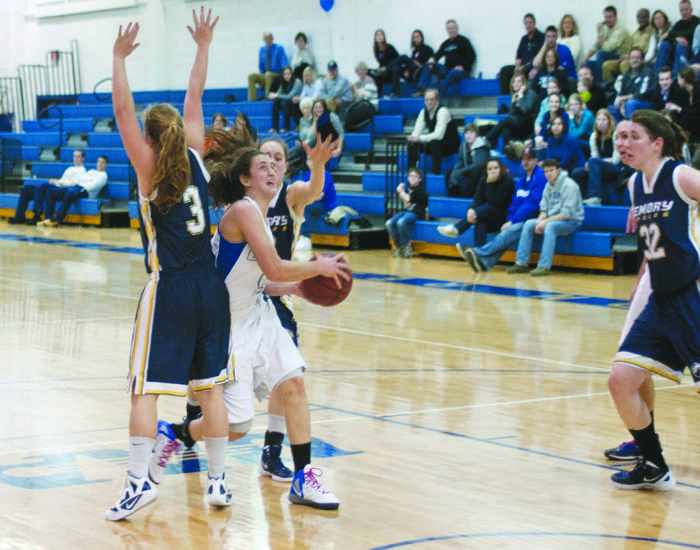 Wins put Case with a shot at fourth in UAA

A pair of victories over the University of Rochester and Emory University gave the Case Western Reserve University women’s basketball team a shot at fourth place with a win Saturday against Carnegie Mellon University. The Spartans (14-10, 7-6) donned pink to face the No. 19 Yellowjackets ( 19-4, 8-5), winning 58-57 with a last-second jumper by junior guard Evy Iacono on Play4Kay Night. On Sunday and Seniors’ Day the women toppled the Eagles (17-7, 8-5) in a 17-point victory to move the Spartans within a game of both Rochester and Emory. With the Yellowjackets and Eagles playing each other in the final conference game of the season, the Spartans will secure a share of fourth place in the UAA with a victory over the sixth place Tartans (3-10, 9-15).

The Spartans’ 14 wins are the most in a single season under fifth-season head coach Jennifer Reimer.

The Spartans’ weekend was driven by Iacono’s stellar play and 55 points in two games. Iacono dropped 27 against the nationally ranked Yellowjackets and hit the game-winning jumper in the paint with nine seconds left to seal the women’s win. Iacono also grabbed nine rebounds and shot 58.8 percent from the field.

Senior Erin Hollinger was the only other Spartan in double figures, with 10 points. Freshman Brooke Orcutt and junior Emily Mueller provided boosts off the bench in significant time. Orcutt grabbed eight points in 23 minutes while Mueller grabbed six boards, four points, and three points in 27 minutes.

Case dominated the game against Rochester, forcing the Yellowjackets to play catch-up for most of the game. The game drew close at the end but the Spartans flourished under the pressure and scored six of the game’s final eight points to give the Spartans a much needed win.

On Seniors’ Day against the Eagles, the Spartans ran away with the win, going on a 15-0 run and holding Emory scoreless for 6:34 midway through the second half. Iacono continued her explosive offensive production, scoring 22 points. Senior forward Erin Hollinger and Chelsea Peck scored 17 and 8 points, respectively, in their final home game. Hollinger grabbed eight defensive rebounds and Peck also grabbed eight, six of which were offensive and a key part of the Spartans’ 13-2 advantage on second-chance points. Junior guard Erica Iafelice scored 12 points and added four assists.

The Spartans will travel to Carnegie Mellon Saturday at 3 p.m. to play the Tartans. A win over the UAA rival will give Case a share of fourth place and will extend the Spartans’ record win total under Reimer. Live video will be available via the Carnegie Mellon athletics website.