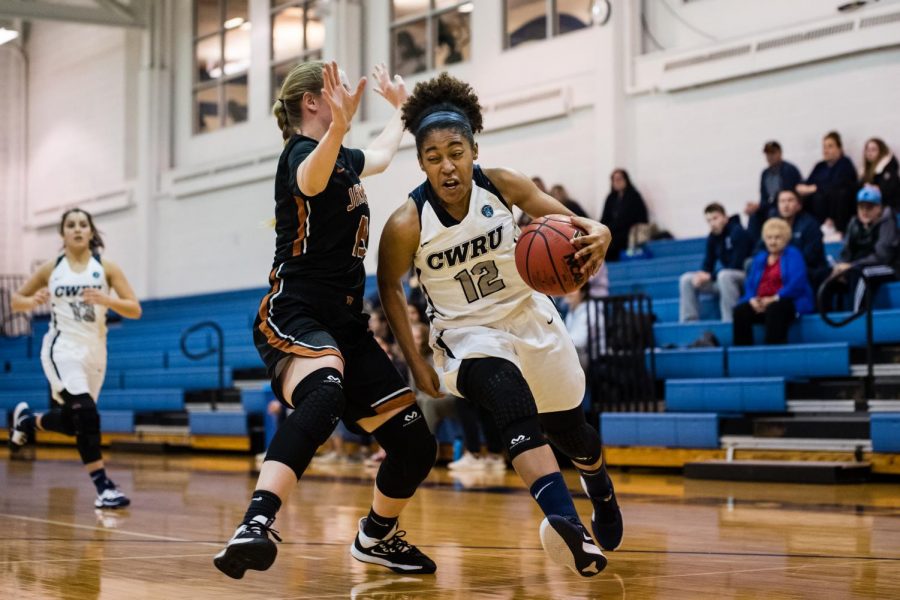 Kendall McConico drives the ball up the court.

The Case Western Reserve University women’s basketball team took on the talented Washington University in St. Louis and University of Chicago rosters and lost 88-71 and 83-41 respectively.

Determined to bounce back from last weekend’s losses, the Spartans went toe-to-toe against WashU on Feb. 14. The teams fervently traded baskets, and third-year Emma Cain converted a layup three minutes into the game to give the Spartans a 6-2 lead. The teams traded shot after shot with no team able to definitively pull ahead. Just when it seemed that WashU was gaining momentum, first-year Isabella Mills sank a jumper, tying the game 16-16 in the closing seconds of the first quarter. The score continued to remain tight throughout the second quarter. First-year McKenna Gross made two consecutive 3-pointers to tie the game at 28-28 in the middle of the second quarter. Spartans started to fall behind as opposing guard Molly Gannon was on fire, shooting a perfect 6-6 from the field for 15 points in the quarter. Her exceptional performance gave the Bears a 48-40 lead heading into halftime. In the third quarter, CWRU consistently stayed five to 10 points behind, with second-year Abbey Lawrence driving for layups and drawing fouls for free throws. WashU pulled away going on a 13-4 run to end the third due to the Spartans turning the ball over constantly and missing multiple threes. Although the Spartans shot an efficient 40.3% from the field, their three-point percentage was an abysmal 27.3%. WashU managed to score 20 points off CWRU’s 16 total turnovers. Lawrence led the team in scoring with 20 points and seven rebounds, while Mills recorded her fifth double-double in her rookie campaign, finishing with 13 points and 10 rebounds.

The 24th ranked Chicago team served as a tough opponent, as the Spartans only managed to score nine points in the first half. The Maroons went on a 10-2 run, and kept attacking the Spartans to end the first quarter 18-6. Chicago stretched the floor, converting 11-28 of their three pointers for 39.3%, which proved to be hard to guard. Mills and graduate student forward Melissa Heath combined for 13 rebounds, locking in possessions against the taller Maroons. The duo of opposing guards Mia Farrell and Taylor Lake overwhelmed the Spartans, as Lake scored 12 points in the second and Farrell added 11 points in the third.

Falling below .500, the Spartans will look to end their 4-game skid playing their final home games against University of Rochester on Friday, Feb. 21 and Emory University Sunday, Feb. 23 on Senior Day.