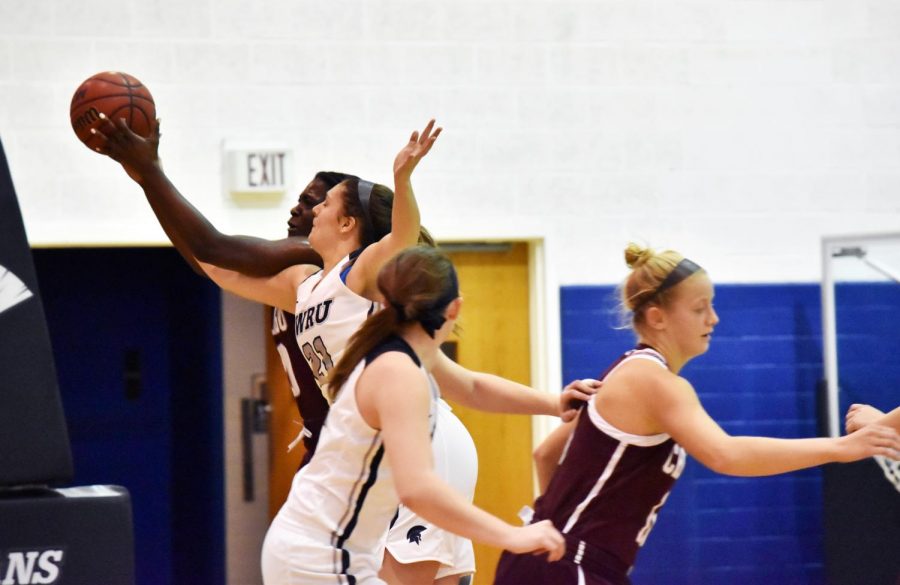 Women's basketball ends the home portion of their 2017-2018 campaign and celebrates Senior Night.

The Case Western Reserve University women’s basketball team played their final two games at home in the Horsburgh Gymnasium this weekend, losing to No. 20 University of Rochester 81-49 and Emory University 73-62.

The Rochester game started with both teams running fast tempo offenses. The Spartans were trailing by five before third-year forward Hillary Hellmann hit a jumper to tie the game at 15 with three minutes left in the first quarter. However, the Yellowjackets ended the quarter on a 8-0 run and took a 23-17 lead. Cain started the second quarter with a layup before Rochester went on a 15-1 run to ice the game.

On their performance, first-year Becca Rowlands comments: “Last time we played Rochester we were down 30 points in the first quarter, so we felt good about [the first quarter].”

The Spartans scored combined 11 points over the second and third quarters. Although the Spartans put forth a strong effort in the fourth outscoring Rochester, the lead was too much to overcome.

The Yellowjackets were on fire, along with fourth-year forward Alexandra Leslie, who went 10-12 and was named Division III first team by D3hoops.com. Rochester ran a deep rotation of 15 players, with the starters playing a maximum of 19 minutes each, ensuring they were playing with fresh legs the entire game. Their bench outscored the Spartan’s bench, 36 to 16.

“Coach had worked with me on finding a body [instead of]…going straight for the ball,” said Rowlands. “I feel like a completely different player now compared to the beginning of the season.”

Hungry to bounce back from the loss, the Spartans ran a fast-paced offense and a tough 2-3 zone against Emory. The score was extremely close the entire first half, with seven lead changes and no team leading by more than 5 points. Hellman was aggressive in the first half, hitting multiple pull-up jumpers off pick and rolls. The Spartans took a 32-30 lead going into halftime.

McConico took over in the third, attacking the rim and even hitting a three for eleven points in the quarter. However, the Eagles went on a 6-0 run in the last two minutes of the third to take a 54-50 lead. Emory carried their momentum to the fourth, gaining a ten point lead in the last seven minutes of the game.

“”Emory took advantage of [our] mental lapse…it was not easy to comeback mentally.”” said Rowlands.

Hellmann finished the game with a double-double of 22 points and 11 rebounds while McConico added 19 points and 4 assists.

Fourth-year former All-UAA first team Kara Hageman was honored before the game. Hageman has missed the 2017-2018 season due to injury and holds the most points scored in a season (504) and in a game (41).

“[Kara has been] an amazing leader and has been there for [the team] no matter what…she did not miss [a single game] and still talks to coach about how the team can do better.” praised Rowlands.

Cain served as a consistent anchor over the past two games, averaging 12 points and 4.5 rebounds. She held her own despite facing Leslie and third-year center Ashley Oldshue, who was named all UAA first team, in the post.

The Spartans will travel to Washington University in St. Louis on Friday at 7 p.m. and University of Chicago on Sunday at 2 p.m. to play their final games of the season.