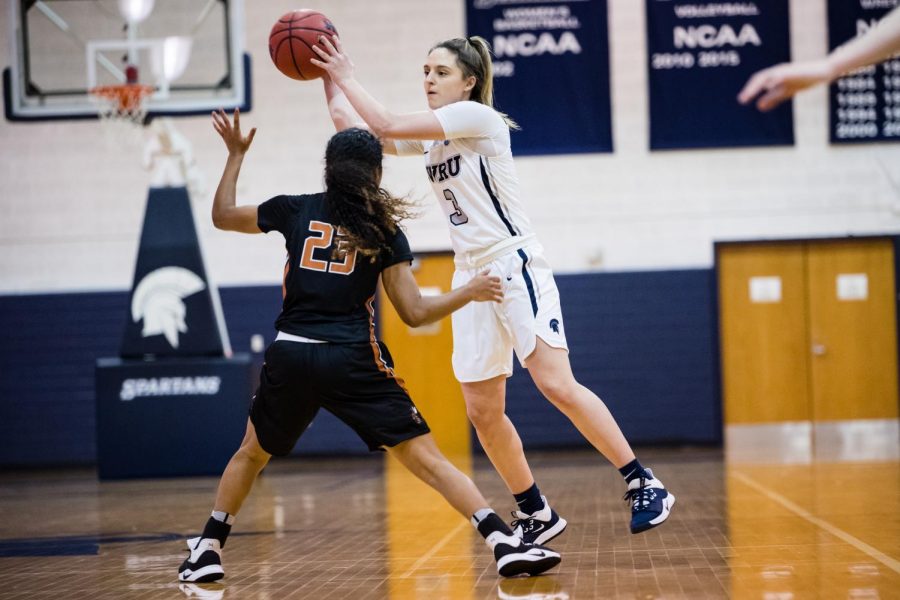 CWRU ended Chicago’s winning streak and extended their own.

Although the snow hit late this winter season, the Spartans remain unfazed and ablaze on their six game winning streak, running through their UAA competition. With home court advantage on their side, the Case Western Reserve University women’s basketball team took down Washington University at St. Louis (WashU) with a score of 74-73 and the No. 14-ranked University of Chicago (UChicago) with a score of 77-71, snapping UChicago’s 10 game win-streak while improving CWRU’s record to 8-6 overall.

Second-year Abbey Lawrence, one of the team’s leaders, commented on how the Spartans’ wins are changing opponents’ perception of CWRU’s team.

“A lot of (UAA) teams doubted us, [so now we’re] proving to the other teams how hard we play and work,” Lawrence commented.

Throughout the first half of their matchup against the WashU Bear, the Spartans were unable to secure a lead. The Bears spread the ball along the perimeter well and made 5 of 9 shots from behind the three-point line. The Spartans adjusted their perimeter defense in the second quarter and only allowed the Bears to make one 3-pointers on four attempts. The Spartans broke out of their slump and outscored the Bears 46-33 in the second half to mount their comeback. Lawrence caught on fire with a fast break jump shot and consecutive threes to score eight straight points and cut the lead to 44-39. The Spartans battled their way back. First-year guard McKenna Gross utilized a nice jab dribble to lose her defender before stepping in for the open layup, making the score 52-54 with about six-and-a-half minutes left in the game. In the last three minutes, both teams traded basket for basket, until the last 20 seconds of the game. WashU continued to draw fouls and convert free throws, but McKenna converted an and-one, putting the Spartans up 72-71 with 13 seconds left. After WashU missed a free throw with the score 73-71, the Spartans ran an inbound play curling Lawrence down, which allowed Gross to receive the ball at the top of the three-point line. Gross again crossed left to use the screen set by third-year forward Emma Cain, crossed back right to step through the help defense to scoop in the game winning lay up plus the foul. Gross converted the free throw to seal the game, and the bench ran on the court to celebrate after regulation. Lawrence led in scoring with 21 points.

When discussing her stellar performance this season, Lawrence gave credit to the team. “None of it would be possible without the team … everyone stepped up and performed well,” said Lawrence.

Against UChicago, the Spartans struck first with a 6-3 lead. They also held UChicago to a 20 percent from the field in the first half. Second-year guard Alyssa Hyland kept the Spartans in the game, providing an efficient 10 points off the bench 12 minutes into the first half. Fourth-year Kendall McConico made a layup and a pair of free throws to extend the lead to eight to start the second quarter, but UChicago cut the lead back to four with a pair of jumpers. Fourth-year guard Alicia Marie Gonzalez then hit a 3-pointer and a layup, as the Spartans sat on a comfortable 10-point lead heading into halftime. UChicago tried to mount a comeback in the third, outscoring the Spartans 23-14 in that period. Graduate student Melissa Heath sealed the game in the fourth for the Spartans, scoring all her 10 points within the period. With the game tied at 62-62 with three-and-a-half minutes left, Heath set a screen for first-year Isabella Mills in transition and rolled in the paint for a wide open layup. Gross came up clutch again making a layup and jump shot in the last two minutes. UChicago failed to hit multiple three-pointers in the last 30 seconds and turned the ball over, as the Spartans hung on for the upset victory.

On Gross’ performance this weekend, Lawrence commented, “[The team] took a while getting into groove for everyone knowing their role on the team … [McKenna] is stepping up as a point guard, attacking the basket and plays hard on both ends, and [Mills] rebounds and goes for loose balls … everyone puts in effort.”

The Spartans will hit the road to face the University of Rochester on Jan. 24 and Emory University on Jan. 26.