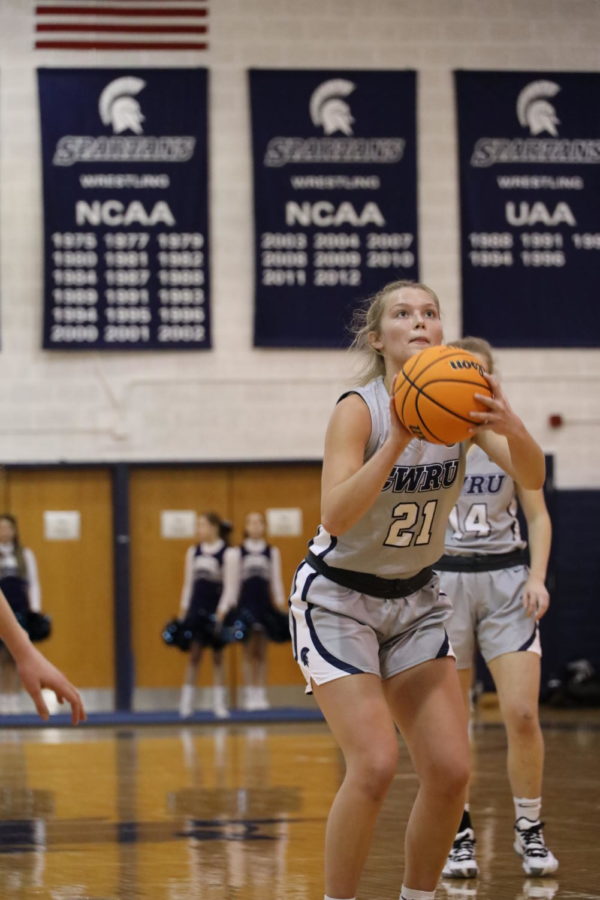 Second-year forward Isabella Mills (#21) was an honorable mention for the All-UAA Honors after averaging 12.6 points, 2.4 steals and 6.2 rebounds this season.

In their 2022 season finale, the Case Western Reserve University women’s basketball team was outplayed by Carnegie Mellon University in a 71-56 loss. But it was fourth-year guard Abbey Lawrence who outshined them all.

CWRU celebrated “Senior Day” in the Horsburgh Gymnasium and honored Lawrence, their star player whose season was unfortunately cut short due to an ACL tear. In her 20 games this season, Lawrence led the UAA with 19.1 points per game on 43.0% shooting with a team-high 32.1% from beyond the arc while going 87.9% from the free throw line, which was the second-best mark in the conference and the sixth-best in the nation. She also averaged 4.4 rebounds, 1.6 assists, 1.1 steals and 0.5 blocks per game. Her 45 points against Waynesburg University on Nov. 16 was a program record and tied most for a Division III game this season. Additionally, she was named the U.S. Basketball Writers Association DIII National Player of the Week on Nov. 23.

After a back-and-forth exchange for the first six minutes, third-year forward Isabella Mills converted a 3-point play after being fouled on a made layup to put the Spartans in front 15-11. This lead wouldn’t last as the Tartans came roaring back to take the 19-15 off of three straight layups. CWRU tried to cut into the lead by getting to the free throw line, but CMU finished off the quarter with the 21-17 lead.

The Tartan offense fell into a sweet rhythm as they repeatedly penetrated the paint for easy scores at the rim. Their lead exploded to 27-19 with about six minutes left in the first half. The Spartans, meanwhile, couldn’t take the lid off the basket and continually settled for fruitless jumpers. In the last 30 seconds, however, third-year guard McKenna Gross hit a 3-point jumper to cut the Tartan lead to 36-31 to end the half.

The Spartan defense continued to crumble in the second half as the Tartans started hitting jumpers, taking the 40-31 lead less than two minutes in. Second-year guard Sarah Mitchell and second-year forward Kayla Characklis combined for nine straight points to trim the deficit to 42-40 and the Spartans seemed poised to make a comeback. Unfortunately, the Tartans held the Spartans scoreless for the rest of the quarter. CMU took advantage and went on a blazing 16-0 to finish the quarter with the commanding 58-40 lead.

It was a similar story for much of the fourth quarter, as the Tartans maintained a 71-54 lead with less than a minute left. With the game out of hand, Head Coach Jennifer Reimer subbed in CWRU legend Lawrence for one last minute in a CWRU uniform on the floor.

Off a missed CMU layup, Lawrence, who was playing cautiously having not completely recovered from her injury, grabbed the rebound. She immediately surveyed the court, dribbled down to the right elbow and took a jump shot with four seconds left.

The crowd was the loudest it had been all game. Lawrence’s family celebrated, overjoyed with a perfect walk-off moment for Lawrence.

“I was running on pure adrenaline at that point,” reflected Lawrence on the poetic moment. “I could hear people in the stands yelling at me to take it easy, but that’s something you really can’t say to an athlete. Once the ball fell into my hands, I just took off and hoped for the best. I really wasn’t expecting to score or having someone from the other team actually play defense. But that’s what made it all the more better—it wasn’t a pity point or play. It felt game-like and realistic.”

Lawrence also noted the magnitude of that experience combined with her “Senior Night,” saying, “It honestly was a fairytale ending. Despite what happened, I wanted to make sure that I ended my career on my terms, not my ACL’s. And that was me being on the court one last time with my teammates, in some capacity. A lot of people doubted the fact that I was going to step out onto the court, because it’s so unheard of to play, let alone walk, on a complete ACL tear. But I made sure to work hard and defy those odds. It was amazing having my closest friends and family in the stands supporting me and experiencing this with me.”

In the 71-56 loss, Characklis posted a game-high 19 points on 8-of-9 shooting to go along with a team-high 10 rebounds. Mills tallied 14 points, five rebounds, four steals and three assists while Gross and Mitchell each added seven points.

Mills was chosen as an honorable mention for the All-UAA honors for her impressive season in which she averaged 12.6 points, 2.4 steals and 6.2 rebounds.

Lawrence finished her career with 987 points, the 16th highest amount in program history. Lawrence was also named one of the 11 finalists for the prestigious Jostens Trophy, which honors DIII basketball athletes for excellence on and off the court. Lawrence was also selected to the All-UAA Second Team, the second time in her career that she received that honor.

“From freshman to senior year, I feel that I have matured both as a person and as a player. Everything I’ve accomplished would not have been possible without the help and support from my family, friends, teammates and coaches,” Lawrence said. “I feel I’ve left my mark on this program because of the way I’m wired as a player. The records and accolades are nice, but I want to be viewed as the ultimate competitor—someone who unapologetically left it all out there every single practice and game.”