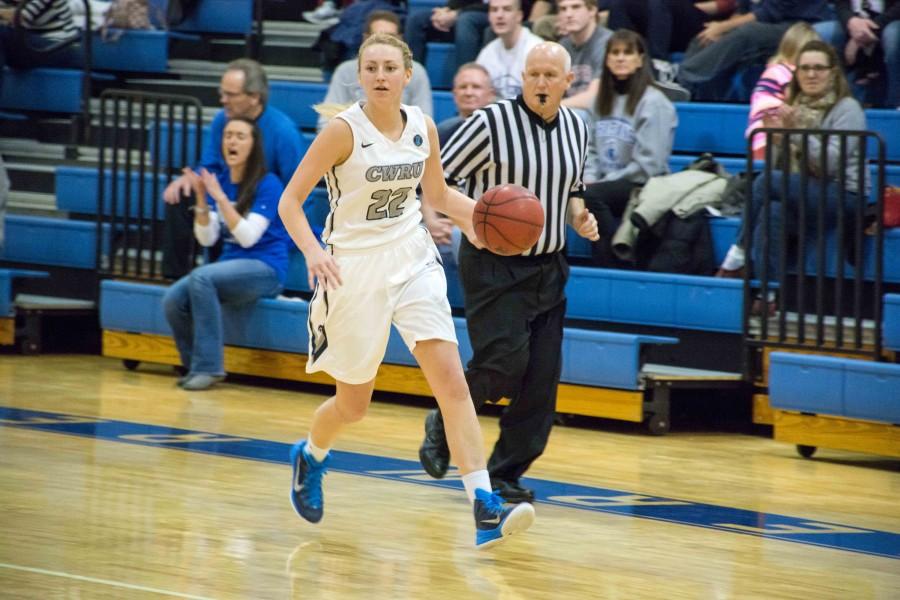 Jessica McCoy dribbles the ball into the Spartan’s offensive half.

The women’s basketball team found their footing to climb back to .500 on Sunday, two days after dropping a heartbreaking upset bid of the visiting New York University squad.

The women’s squad has had their share of ups and downs this season, but back-to-back strong showings this weekend seem to put the Spartans on the right track.

Senior point guard Amanda Germer led the Spartans to the brink of victory, before a last-second bucket destroyed Case Western Reserve University’s upset hopes over the visiting Violets. The Violets, who were ranked eighth in the nation during the game and now are ranked seventh, came in as heavy favorites over the volatile Spartans. The Spartans, however, came out ready to play at the highest level and found themselves seconds away from an upset.

The two teams battled for dominance, and with 28 seconds remaining, senior guard Brooke Orcutt seemed to give it to the Spartans as she hit two from the line to gain a single-digit 59-58 lead. All the Spartans needed to do was stop the visitors on the ensuing possession. However, with five seconds left on the clock, the Violets’ Amy Harioka drove through the lane and found space to hammer the nail in the coffin, a perfectly executed layup. The Spartans had a desperation shot miss its mark, as the Spartans fell for the second straight University Athletic Association (UAA) matchup by a single point, having lost to the Carnegie Mellon Tartans the week before by the same margin.

Sunday, the Spartans didn’t allow the tough loss from Friday hang over their heads, however. The ladies came ready to play and followed the lead of Orcutt, who put on a shooting clinic for the incoming Brandeis Judges.

Orcutt exploded on the offensive side of the ball, putting 23 points on the boards for the Spartans. Senior forward Berit Eppard added 10 points of her own and led the Spartans on the boards, pulling down six.

The Spartans traded blows with the visitors to start the game but grabbed a foothold when they went up 13-14 with 5:50 left in the first half to carry a lead into the locker room and then deep into the second half.

The Judges refused to go away quietly, however, and with just over four minutes left in regulation, tied the game at 45-45.

The Spartans answered quickly, as Jessica McCoy made a pair of free throws two possessions later. The Judges tied the game again but were unable to climb completely out of their hole in the final minutes, as Orcutt and Germer combined for nine points in 65 seconds to put the game firmly out of reach and into the win column for the Spartans, a first in UAA play.

The win put the Spartans back to even wins and losses on the season, as they head into their toughest-scheduled stretch of the season.

Following the brief homestand this past weekend, the Spartans will be away from campus for the next two. They begin the trip in Atlanta tonight, where they will go head-to-head with Emory University at 6 p.m. Following the matchup, they will head north to NYU to take on the University of Rochester on their home court on Sunday, Jan. 25 at 2 p.m.