Women’s basketball looks to turn victory over Emory into streak 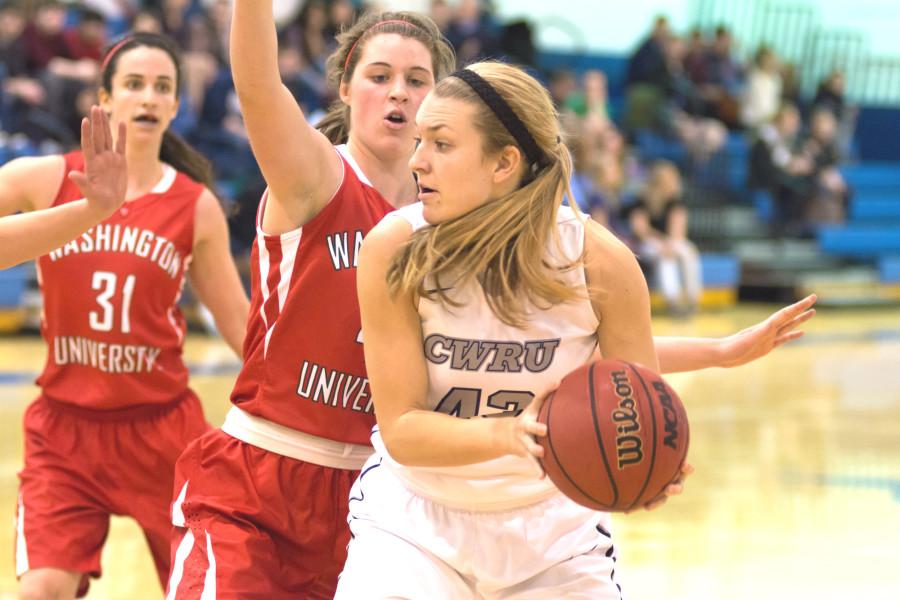 Spartans Laura Mummey looks for a teammate while under pressure earlier this season. Mummey helped boost the Spartans to their first UAA win this past weekend.

The Case Western Reserve University women’s basketball team played two games on the road this past weekend. The first game was played up in Rochester, New York, and the seventh-ranked University of Rochester YellowJackets emerged with a 66-55 win.

This was a pretty evenly fought game, with a 20-9 margin in the second quarter being the big difference maker for the YellowJackets. This loss dropped the Spartans to 0-4 in conference play, 5-10 overall. Laura Mummey, a fourth-year student, contributed mightily to the Spartans’ efforts, scoring 21 points and matching her career high in rebounds with 13. Third-year student Jessica McCoy continued her boxscore-filling ways, contributing nine points, seven rebounds, four steals and three blocks.

University of Rochester’s Alexandra Leslie was tough for the Spartans to shut down inside, as she had 19 points and 11 rebounds.

Following this game, the Spartans traveled down to Atlanta to take on Emory University. Emory entered the game at 10-5, but CWRU was able to secure the victory, 76-62. The win brought the Spartans’ record to 6-10, 1-4 in the University Athletic Association. There were contributions from all over the court for the Spartans in this one.

First-year student Hillary Hellman contributed 18 points and 11 rebounds, finishing the game strong with 12 in the fourth. Second-year student Kara Hageman grabbed 13 rebounds to go with 16 points. McCoy had 16 and 10, and Mummey was able to lead the Spartans in scoring with 19. The game was closed out by a clutch CWRU team, as the ladies drained their last 13 free throws to secure the win.

The Emory game was really a tale of two halves. The Eagles took a 32-25 lead into halftime, and was up 13 early in the second. However the Spartans responded with a 14-0 run that took a little over four minutes to take a one point lead. A big fourth quarter by Hellman and clutch free throw shooting down the stretch preserved the first conference victory for this young team.

The next game for the Spartans will again be on the road, as they will travel to Massachusetts to face off against Brandeis University. When four of the team leaders McCoy, Hageman, Hellman and Mummey are firing on all cylinders after a game like this, you can expect a strong effort by the Spartans against the Judges. Brandeis is also 1-4 in conference with its lone victory coming against Emory, so the Spartans should expect an evenly matched game.

Hopefully they can start to put a nice little win streak together, one game at a time.