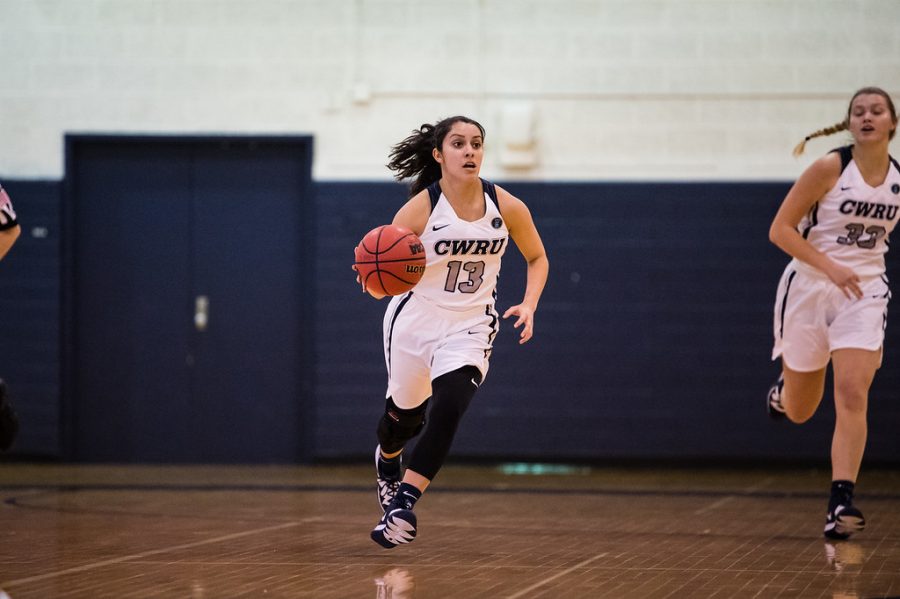 Alicia Marie Gonzales, dribbles the ball up the court against Juanita College, who CWRU beat 70-46 after a rough first quarter

Over winter break, the Case Western Reserve University split games in the M-Club Tournament, which was highlighted by a 70-46 win against Juniata College. After dropping a game to John Carroll University, the Spartans have since gone on a four-game win-streak, which has included a triple-overtime victory against Denison University, 79-72. The team maintains an overall record of 6-6. Building momentum is important as the Spartans are starting UAA conference play. They picked up their first UAA win against Carnegie Mellon University, 78-51.

The Spartans struggled early against Juniata, shooting 4-16 from the field, but still remained close, trailing 19-15 by the end of the first quarter. Juaniata extended the lead to eight with two made layups, but after a timeout CWRU clawed their way back, trading shot-for-shot. They ended the quarter down two, 31-29, with second-year Abbey Lawrence scoring 10 points. Juniata again extended the lead to start the third, but three three-pointers from first-year Isabella Mills kept the Spartans in the game. The Spartans suffocating defense finally got to Juniata, as the Spartans began a 21-0 run that lasted till the last four minutes of the fourth. The Spartans guarded the perimeter well, allowing Juniata to go only 1-16 from three, and forced 24 turnovers, which were converted into 27 points. Lawrence finished the game with 21 points and was named to the M-Club All-Tournament team. Mills stuffed the stat sheet with 19 points, 16 rebounds and 6 steals.

Two games later, the Spartan stunningly upset 7-2 Denison, after being down 15 points. With about a minute left in regulation, third-year forward Emma Cain managed to steal the ball and score a fastbreak layup to take the lead 52-50. The Spartans forced another turnover, giving them the opportunity to seal the game, but Mills did not convert her three point attempt. Denison sneaked in a layup to tie the game, and fourth-year Kendall McConico missed a jumper to force the game into overtime. Lawrence made a layup and a free throw to extend the lead to three at the start of overtime and, as tensions remained high, Denison went to the line with the possibility to tie the game. They missed both free throws. The game still went into a second overtime, however. In the second overtime, Denison made two threes, but McConico tied the game again with two layups and a pair of three throws. After a thirty second timeout, Denison’s three point attempt did not go in with four seconds left on the clock. McConico again stepped up, securing defensive rebounds, drawing fouls and assisting teammates as CWRU ran away with the game.

The Spartans will look to extend their winning streak as they host Washington University in St. Louis at home on Friday, Jan. 17.