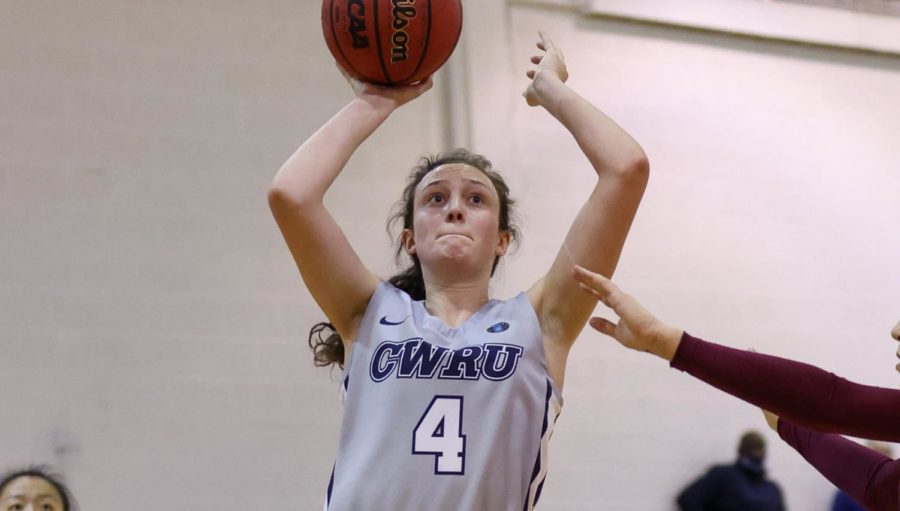 Second-year forward Kayla Characklis tied for an impressive game-high 19 points in the Spartan's game against Rochester.

Following a four-game losing streak, the Case Western Reserve University women’s basketball team notched their third conference win in an overtime thriller against Emory University last Friday. The win marked the second OT victory of the campaign and the first road overtime win since 2018. The momentum didn’t last on Sunday, when the Spartans fell 68-55 to the University of Rochester, dropping to 8-16 overall and 3-10 in the conference.

Second-year forward Preet Gill opened the action in the first quarter against Emory with a jump shot to give the Spartans a 2-0 lead. That wouldn’t last long as the Eagles had answers to every CWRU bucket. With less than four minutes left in the period, Gill scored on back-to-back field goals to put the Spartans ahead 12:10. Emory tied it yet again, but two made free throws from second-year guard Margaret Terry gave CWRU the 16-14 lead heading into the second.

It was a similar story half of the second quarter. At 6:27, Emory tied the game at 21-21 but the Spartans sparked a 7-0 run, giving them a 28-21 advantage with 2:10 until halftime. The Eagles didn’t back down and overpowered the CWRU defense to put themselves back in the game, finishing the half on a made 3-pointer to bring themselves within one at 28-27.

In the third quarter, the Spartans retook a big lead following a layup by second-year forward Kayla Characklis to make the score 40-32. However, the Eagles once again proved to be great closers and kept themselves in the game, finishing the quarter 42-41.

Emory took the 50-49 lead with 5:47 remaining in the fourth quarter with a pair of free throws. The teams traded leads until two successful free throws from third-year guard Isabella Mills put CWRU ahead 55-52.

The Eagles pushed back and tied the game 55-55 after a layup and a made free throw. With 29 seconds left in the quarter, the Spartans had an opportunity to capitalize. However, third-year guard McKenna Gross missed a jumper and Emory turned the ball over, sending the game into overtime.

After Emory scored off a layup for the first points of overtime, the Spartans’ stalwart defense spurred a 13-0 run that catapulted CWRU to 68-57 with 50 seconds left. The Eagles desperately tried to make a comeback but only scored twice before the final buzzer sounded. CWRU came away with the 68-61 victory on the road.

Mills led all scorers with 24 points while adding 11 rebounds, Gross put up 13 points with 2 rebounds and Characklis had an all-around game with 8 points, 6 rebounds, 2 assists, 1 steal and 2 blocks. The Spartans’ impressive win was highlighted by the fact that Emory had the advantage in almost every major team stat. It was CWRU’s firepower that made the difference, posting very efficient percentages in field goals (41.1% to 32.9%) and 3-pointers (38.5% to 9.1%).

Against Rochester, Characklis controlled the tempo, pouring in 6 of the total 12 points in the first quarter. Rochester answered the bell and scored a buzzer beater to tie the game 12-12. The Spartans built a 5-point lead about midway through the second but Rochester used a balanced attack to take the lead at halftime 31-30.

CWRU’s defense fell apart to begin the second half and the Yellowjackets expanded their lead 37-30. On the other end, the Spartans couldn’t take the lid off the basket and missed two straight layups. Rochester kept rolling and went up 48-34 before CWRU found some rhythm to bring the game within 7 points. Characklis converted a 3-point play after being fouled on a layup and first-year guard Lucy Vanderbeck nailed a 3-point shot to cut the deficit to 5. A last second layup from Rochester, however, put the Yellowjackets back up 51-44 heading into the fourth quarter.

The Spartans scored six straight points to cut the lead down to 51-50, but Rochester countered with back-to-back 3-pointers, moving up 57-50 with less than six minutes to go. CWRU never found their offense again and allowed the Yellowjackets to go on a 11-5 run to finish the game 68-55.

Characklis tied for a game-high 19 points on 8-of-15 shooting while Vanderbeck added 13 points and 4 rebounds off the bench. Second-year guard Margaret Terry chipped in 7 points, 4 rebounds and 4 steals. The Spartan bench outscored Rochester’s bench 22-11, but the Yellowjackets pummeled CWRU in field goal percentage (42.2% to 33.3%), points off turnovers (18-6), points in the paint (36-18) and fastbreak points (17-4).

On Feb. 26, the Spartans will battle against Carnegie Mellon University at home in their season finale. The game is scheduled at 4 p.m. in the Veale Athletic Center.