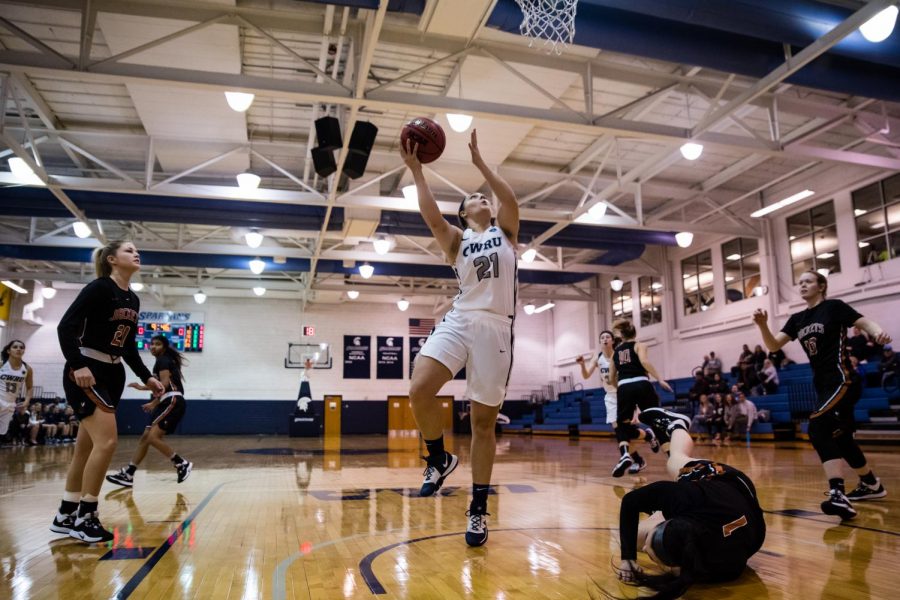 A young Case Western Reserve University women’s basketball team has experienced an up-and-down start to their season. They beat Waynesburg University 96-79. The team split games at the M-Club Tournament in Alliance, Ohio, dropping the first game against 6th-ranked Hope College 80-43, then dominating Juniata College 70-46. Before Thanksgiving weekend, the team took a 71-54 loss to John Carroll University, making their overall record 2-6.

Although key players from the past year graduated, their shoes have been filled by new talent. The team is led by second-year Abbey Lawrence, with 16.8 points per game, making the jump from her average of eight points per game from last year. Commanding the paint is first-year forward Isabella Mills, who is averaging 9.3 points and 6.6 rebounds, and has notched two double-doubles so far this season. One of them was against Waynesburg, where Mills notched 16 points and 11 rebounds.

Against Waynesburg, the Spartans took advantage of a blitzing strategy on offense in the first minutes of quarters, scoring their first points in less than eight seconds. Lawrence scored the first nine of the 13-2 run in the first quarter. Their fast-pace offense allowed the Spartans to maintain their lead, going on 14-2 run to start the second. They maintained a comfortable lead throughout the game. First-year guard McKenna Gross scored a career high 15 points, going a perfect 9-9 from the free throw line.

Against Juniata, the score remained tight in the first half, as both teams traded baskets and took advantage of the other team’s turnovers. Graduate student forward Melissa Heath kept the Spartans in the game by scoring a three at the end of the first and two consecutive points to start the second. With 4:20 left in the third quarter, the Spartans went on a 21-0 run that secured the win. The Spartan defense only allowed 15 points. They also forced 15 turnovers, converting them to a total of 13 fast break points. Juniata was unable to score any point off of fast breaks. Lawrence led the team with 21 points, while Mills stuffed the stats sheet with career highs of 19 points, 16 rebounds and six steals, while shooting 4-8 from three. Lawrence was named to the M-Club all-tournament team.

The Spartans struggled against John Carroll’s tall lineup, getting outrebounded 47-24, but still shot a solid 42 percent from the field and 33 percent from three as a team. John Carroll aggressively took a 14-3 lead in the first quarter, but the Spartans bounced back with an 8-0 run of their own. The Spartans trailed by 15 in the second, but second-year guard Alyssa Hyland scored back-to-back threes and cut the lead to nine. Unfortunately, the Spartans were unable to secure the win. Despite the loss, both Mills and Gross recorded 12 points, with Gross shooting 4-6 and Mills shooting 3-7 from three.