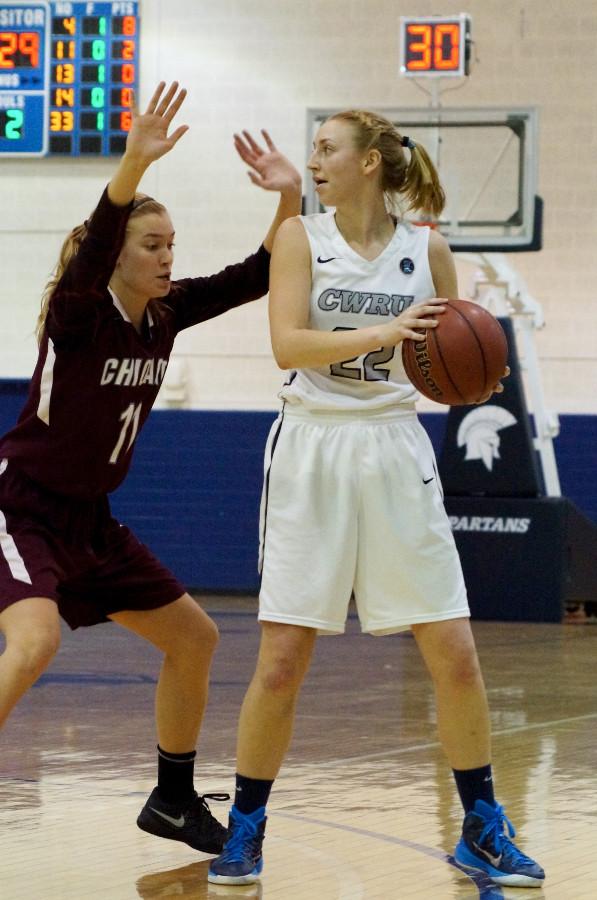 Jessica McCoy keeps the ball away from a University of Chicago defender this past weekend.

The Case Western Reserve University women’s basketball team played host to two University Athletic Association games this past weekend. The Spartans fell in both games, sinking to 0-3 against conference opponents.

The first game of the weekend was a night game on Friday against the number 11 team in the country, Washington University in St. Louis. The Bears were able to head home with a victory, but that cannot be attributed to a lack of effort from the Spartans in a 64-55 defeat.

The Spartans shot at a higher percentage from the field, 38.5 percent to 32.9 percent for Wash U, but were on the wrong side of the turnover battle, turning the ball over 24 times to Wash U’s 12. Second-year student Kara Hageman was able to lead the Spartans with 16 points, and third-year student Jessica McCoy followed her lead, dropping another 15.

However a 21-5 edge in points scored off turnovers by Wash U was more than enough to make up for their poor shooting from the field. This game brought the Spartans to 5-8 on the year, including losses in their first two conference games.

Sunday afternoon brought the second of two games over the weekend for the Spartans, as the University of Chicago came to campus. This game ended in an almost identical nine-point loss of 67-58, with the Spartans again playing hard but not having quite enough.

Chicago got a strong contribution from their bench, including 29 of their points. The difference in this game was better shooting by Chicago, with the turnover and rebounding battles being relatively equal between the squads. Hageman had another strong game and was able to equal her career rebounding high with 14 boards. The CWRU scoring was led by McCoy, who dropped 14 points, and first-year student Hillary Hellmann with 12.

A big second quarter for the ladies from Chicago made the difference, as they outscored the Spartans 21-9.

The second loss of the weekend brings the Spartans to a 5-9 record on the year, including an 0-3 record in University Athletic Association contests. The Spartans will play their next four games on the road, all in conference. The trip starts next weekend, as the ladies travel up to the University of Rochester to play the Yellow Jackets. That game is Friday, Jan. 22.

As this young team continues to go through conference play, expect them to shore up their game. Turnovers are often the mark of a young team, and so experience in conference play will only help them out in terms of controlling the ball. The ladies return to the court at 6 p.m., looking to turn things around.