Women’s basketball wins in the clutch 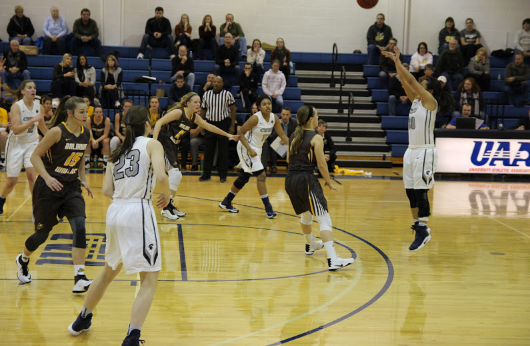 Second-year guard Kasey Yu shoots from beyond the arc. The team made 70% of their 20 three point attempts in their previous game against John Carroll.

To start off the Springhill Suites Tournament, the Spartans tipped off against host Washington & Jefferson College. Washington & Jefferson won the first quarter by five points, but CWRU eventually rallied back. The fourth quarter showcased a grind-it-out, points-at-a-premium style, and CWRU thrived. The Spartans went on to win the game by six, led by third-year forward Kara Hageman’s 21 points. Fourth-year guard Jess McCoy gave the team the chances they needed by pulling down nine rebounds and also managing to dish the ball to her teammates for three assists.

After outlasting Washington & Jefferson, CWRU squared off against La Roche College for the tournament title.

Early on, the Spartans fell behind by as many as nine points. They turned things around quickly and ended up closing the gap to just one by the end of the first quarter. As the fourth quarter came to a close, with barely over a minute remaining, La Roche managed to cut the Spartan lead to just one. McCoy sank two free throws and increased the CWRU lead to three, and a last-second three point attempt from the Redhawks failed. The victory gave CWRU the trophy as tournament champions.

As the team came back home for non-tournament games, things were not quite as smooth. The Yellow Jackets gave CWRU more than they could handle, taking the game into an extra period and defeating the Spartans by five. After Baldwin Wallace’s victory, CWRU improved their play against Oberlin College. Again, the game went into overtime, but this time the Spartans came out on top by the smallest of margins.

Finally, the Spartans played at home against John Carroll University. This game did not go into overtime, as CWRU enjoyed a steady lead for most of the matchup. Although John Carroll did manage to take the lead in the both the second and third quarters after monster runs, the Spartans managed to get it back and never trailed again. Second-year guard and forward Hillary Hellmann recorded a career-high 31 points to lead her team. Hellmann’s scoring outburst was the best the program has seen since 2013.

Next for the team is a trip to The College of Wooster after a 63-48 win over Denison University. The team hopes to continue the momentum they have after the game against John Carroll, a statement that is especially true for Hellmann, who will hopefully keep things hot going forward. The team has a 5-2 overall record and is looking to improve their 0.714 winning percentage. After the game against John Carroll, all eyes are on Hellmann, and expectations for the team are at a high for the season.