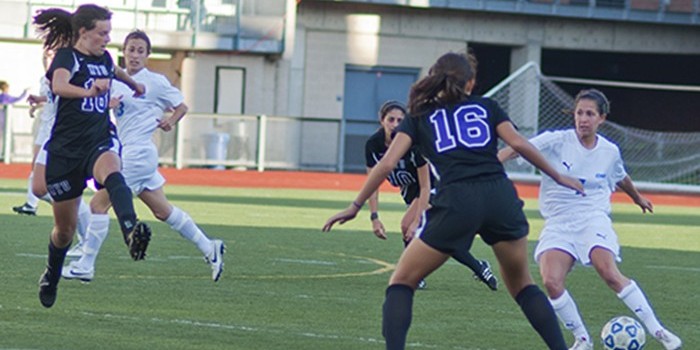 For a game that, from past history and current records, was guaranteed to be a close game, the Case Western Reserve University women’s soccer team was able to make it anything but against a talented New York University team.

In their opening University Athletic Association matchup, which fell on Homecoming weekend, the Spartans dominated the Violets on both sides of the ball to earn their first UAA win of the season, and a 2-0 shutout in the process.

“Winning our first UAA game gives us momentum and confidence going forward,” says senior Maeve Goede. “We need to take [the season] one game at a time and continue to improve each game in order to find success in the UAA.” With the improvement already shown this season, look for the Spartans to keep building on their current four-game winning streak.

Goede, who anchors the center of the back line, earned UAA Defensive Athlete of the Week honors not only for helping Case to its second straight shutout of the season against NYU, but also for getting an assist off a corner in the game as well.

That goal, the first of the game for the Spartans, came just 18 minutes into the game off a perfectly placed corner. Goede directed the cross to sophomore forward Jessica Sabers, the current Spartan points leader, who headed it strongly into the left side of the goal for her team-leading seventh goal of the season.

Knowing that the Violets have a talented line of forwards, the Spartans kept up the pressure after their early goal and were rewarded with one of the more perfect strikes of the season. The Spartans were able to string together a series of perfect passes before junior Leah Levey found a streaking Rachel Bourque, who placed the ball perfectly in the side of the net, before the keeper could get within a foot of saving it.

Luckily, the Spartans would only end up needing one goal as Goede, Katie Chapin, Megan Novak, Kate Dolansky, and goalkeeper Megan Romelfanger prevented the ball from reaching the back of the net, despite the Violets’ 15 shots on goal.

“When Allie [Debeljak] reached across the net to preserve our shutout by clearing what would’ve been a certain goal, everyone in the stands collectively held their breath before they started to cheer like crazy,” says Goede.

On Tuesday night, the Spartans earned their third shutout in a row, earning a 1-0 victory over the Ohio Wesleyan University Battling Bishops. Despite dominating the possession battle, the Spartans were unable to score until the 80th minute when sophomore forward Christine Straka was able to use a perfect cut to lace a shot into the empty side of the net.

With 27 minutes left in the first half, the Spartans came close to gaining an advantage when Leah Levey got a strong shot off, which was barely saved by a diving Hannah Zacharias of OWU. Just five minutes later, Leah Levey again had a chance at a goal, but was stopped short by Zacharias.

The Battling Bishops’ best chance came with just one minute left in the first half. With OWU knocking on the door, Battling Bishop forward Jessie Huschart blasted a shot from the penalty box, which streaked above the gloved hand of Romelfanger to hit the crossbar and arc right back into the path of Huschart, who again barely missed the goal, sending the ball over the crossbar by a couple of inches.

Case hits the road to take on three straight UAA opponents in Brandeis University, Emory University, and Carnegie Mellon University. The Spartans are sitting pretty, with an away record of 5-0-1, but with a combined record of 16-1-2, Brandeis and Emory should prove to be tough tests.

The Spartans are at home again on Saturday, Oct. 20, when they take on in-state rival Kenyon College at 1 p.m. on Case Field.