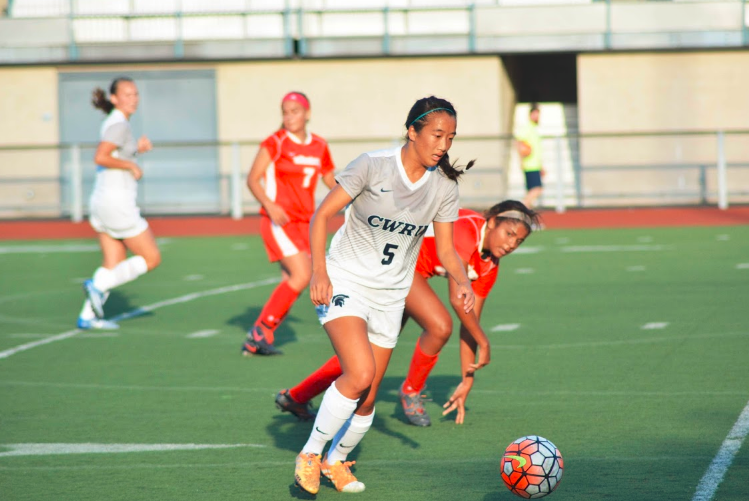 Forward Kimberly Chen keeps her eye on the ball as she receives a pass during an early season match.

The Case Western Reserve University women’s soccer team tied John Carroll University (JCU) at one goal a piece in double overtime on Sunday, Sept. 25, and then followed by dropping a match against Denison University, 1- 0, on Wednesday, Sept. 28. The Spartans are now 4-3-2 on the season as they begin conference play in the University Athletic Association (UAA).

In the first game of the week, CWRU found itself in an intense, back-and-forth game with JCU. The team found itself down 1-0 in the 16th minute thanks to Blue Streaks second-year forward Bailey Fischer. The Spartans were unable to score until the last minute of the half, despite outshooting John Carroll 7- 5. Scoring the Spartans goal off of a corner kick was fourth-year forward Jennifer Zajic.

In the second half, the Spartans outshot JCU 11-5 with neither team scoring. The match would end up tied after double overtime and ended in a draw. During the 110 minute match, CWRU outshot the Blue Streaks 20-10, despite the lack of scoring.

When asked about her team’s overall performance during the contest, Head Coach Tiffany Crooks said, ”We played well offensively against John Carroll, especially in the overtime periods. We generated so many great scoring opportunities. A great deal of credit for the tie goes to the JCU goalkeeper.”

In the Spartans’ second game of the week, they were shutout by Denison University 1-0. Despite having 16 total shots, including seven on goal, the team was unable to get past third-year Big Red goalie Jenny Herold, who recorded seven saves.

Denison’s fourth-year forward Jacquie Graham scored a goal in the 17th minute of the game in what proved to be the difference maker in the contest. Third-year Big Red defensemen Drew Wentzel’s free kick hit hard off of the CWRU wall. After two more attempted shots on goal, Graham finally finished from about five yards out.

The Spartans attempted a strong second half comeback, pouring in 10 of their 16 total shots, however it would not be enough, as the team never managed to tie the score.

CWRU will play against New York University (NYU) in their first conference match on Saturday, Oct. 1 at 11 a.m. at DiSanto Field. When asked about the upcoming matchup against a tough New York team, Crooks said, “NYU is great.  They play so well together and are fast and athletic.… We’ll be looking to play our best soccer and get on the board in the UAA standings.”