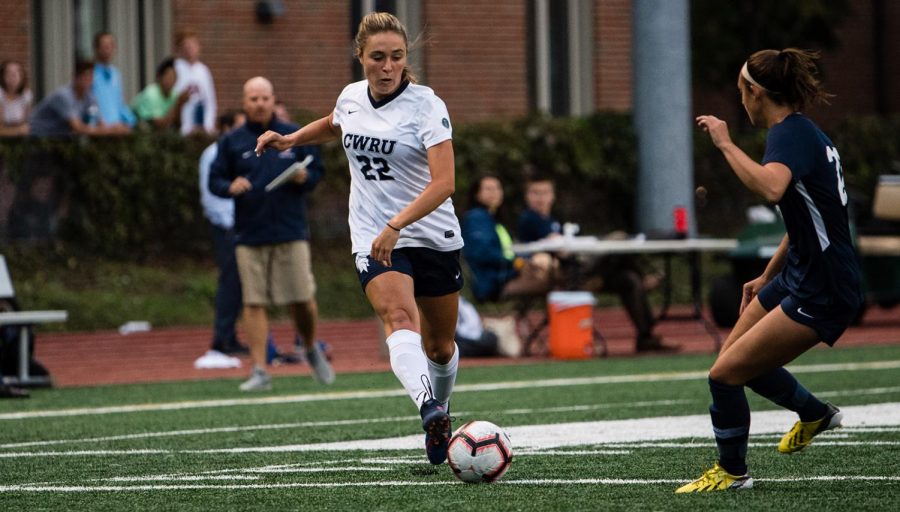 The Case Western Reserve University women’s soccer team remained undefeated this weekend, improving their record to 6-0-0. The Spartans had another shutout at home, beating Albion College 4-0, and then traveling to Michigan and coming out on top against Adrian College 3-2 in overtime. The team’s strong start has them ranked 22nd by United Soccer Coaches.

Not a minute into the game, second-year Anika Washburn took a shot, but it was saved. The Spartans continued to be aggressive, taking another two shots and a header but were all too wide. At the 22nd minute, fourth-year Kimberly Chen took a corner kick from the right and weaved the ball to a trailing second-year defender Lizzie White for the header. White got the first step of the defender marking her and ran towards goal, directing the ball into the top left corner of the goal out of the keeper’s reach.

Chen leads the team this season so far with four assists. With two minutes remaining in the second half, Albion played with a sense of urgency to even the score, relentlessly going after the ball. The opposing defense forced the Spartans to rapidly move the ball around, which eventually found first-year Aniya Hartzler deftly stutter-stepping, faking a pass and stringing the ball to first-year Maia Sethi running past a defender and shooting it right in front of the keeper for her first career goal.

Washburn took a free-kick after an Albion foul, curving the ball from the 20-yard line right into the opposing goalie’s hands. Since the ball was so slippery, the ball fumbled out and second-year Christina Hickinson chipped it into the goal while avoiding the diving keeper’s face. Hickinson and Anika celebrated the 3-0 lead with their signature handshake and a small dab. To add the cherry on top, first-year Merry Meyer found Hickinson in front of the goalbox, who slightly boxed out her defender to receive the pass, then created separation for the close shot at goal. Hickinson iced the game 4-0 with 10 minutes remaining.

Against Adrian, the Spartans drew first blood when Meyer connected with second-year Kat Rebele for the header off a corner kick for Rebele’s first collegiate goal. Adrian fired back and tried to even the score, attempting 10 shots and four corners in the first half, but fourth-year keeper Lauren Unterborn anchored the defense well.

In the second half, Adrian evened the score 2-2, breaking the Spartans’ five-game shutout streak. In the last three minutes, a foul by Adrian gave the Spartans a free kick. Washburn weaved the ball to Hickinson but the ball barely chipped the top of the post. In overtime, the Spartans had possession of the ball from kickoff, with Hartzler playing ring around the rosie with two defenders before passing it to second-year midfielder Taylor Bova, who stringed it to Hickinson at the center of the box.

Hickinson went for the shot but was deflected by the opposing keeper. Chen came speeding in from the left side and drove the ball for the win before the goalie could get up and block it. The reserve players ran on the court as the team celebrated with a large group hug. Chen was also honored as the Spartan Club Athlete of the Week for her performance.

CWRU will look to continue to extend their winning streak against Ohio Northern University on Friday, Sept. 20 at DiSanto Field.