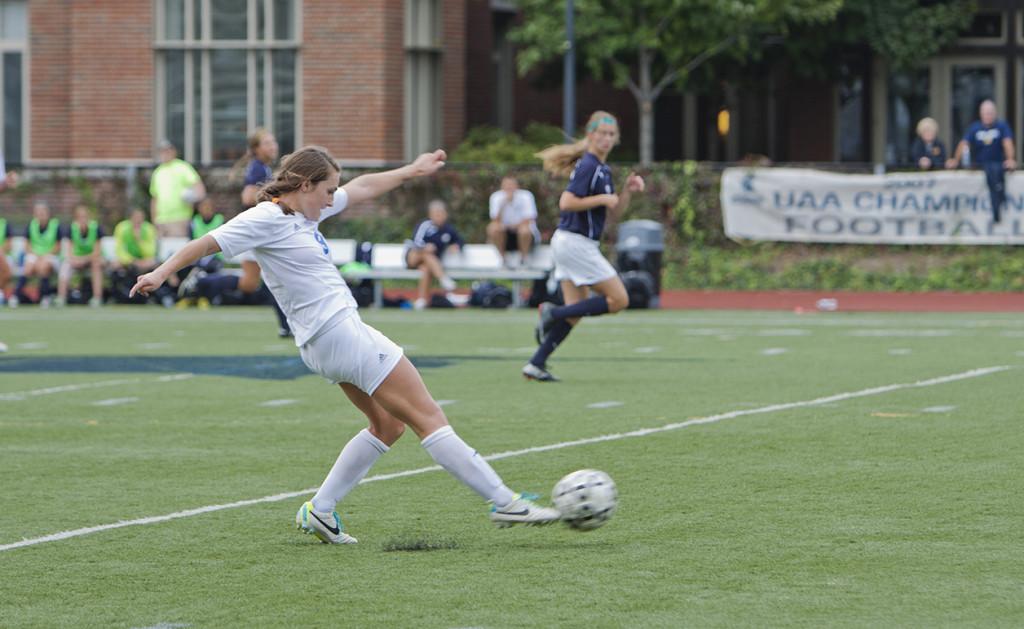 The Case Western women’s soccer team is back on track after winning three straight. The Spartans advance to 6-4 on the season after beating John Carroll at home last Sunday winning 4-0 and squeaking out a 1-0 win in a very close game on Tuesday night against Ohio Wesleyan.

Jessie Sabers led the Spartans’ offense on Saturday, scoring two goals in the dominant win over John Carroll. Sabers scored the Spartans’ first goal of the game when Leah Levey fired in a pass that split two defenders and found Sabers, who beat the Blue Streaks’ keeper for the only goal of the half. Despite having a nice lead, the Spartans came rushing out of the gate in the second half to take control of the game.

Just one minute into the second half, Sabers scored again, poking a ball in during a scrub in front of the net. The 2-0 lead wasn’t enough for the Spartans as they added to their lead. Makenzie Best fired a shot into the left upper 90 and scored her first goal of the season in the 72nd minute. Freshman Jennifer Zajic chipped the Blue Streaks’ keeper from 25 yards out to make the score 4-0.

The strong play continued on Tuesday night against the Ohio Wesleyan Battling Bishops. The offense continued to pressure the opposing defense, and started early with five shots in the first 10 minutes. The two teams traded 35 shots back in forth in the first 80 minutes with neither of them able to find the back of the net.

The Spartans continued to press Ohio Wesleyan and around the 80th minute the Spartans seemed to break through, when Kiley Armstrong sent in a strong shot that the Wesleyan keeper was not going to be able to reach. Then, at the last second, the ball bounced off the right post and a scramble sent the ball out of bounds.

At the 80:15 mark, Sabers sent a shot into the box after collecting the corner kick from Levey. The shot deflected off of a Battling Bishop defender and bounced into the net. Since the goal came off a deflection, it is an own goal. Despite being an own goal, it was all the Spartans needed as they held on for the win.

Smith hasn’t been scored on in the past 292:12 minutes of play and has only given up one goal in the past two weeks. She is third in the UAA for saves with 27 and for a goals against average of 0.83. Smith, a junior, is a new addition to the Spartans team. She played two years at the University of Miami (Fla.).

Case Western is preparing for the opening of the UAA season starting on Saturday, Oct. 5 at home against Brandeis.