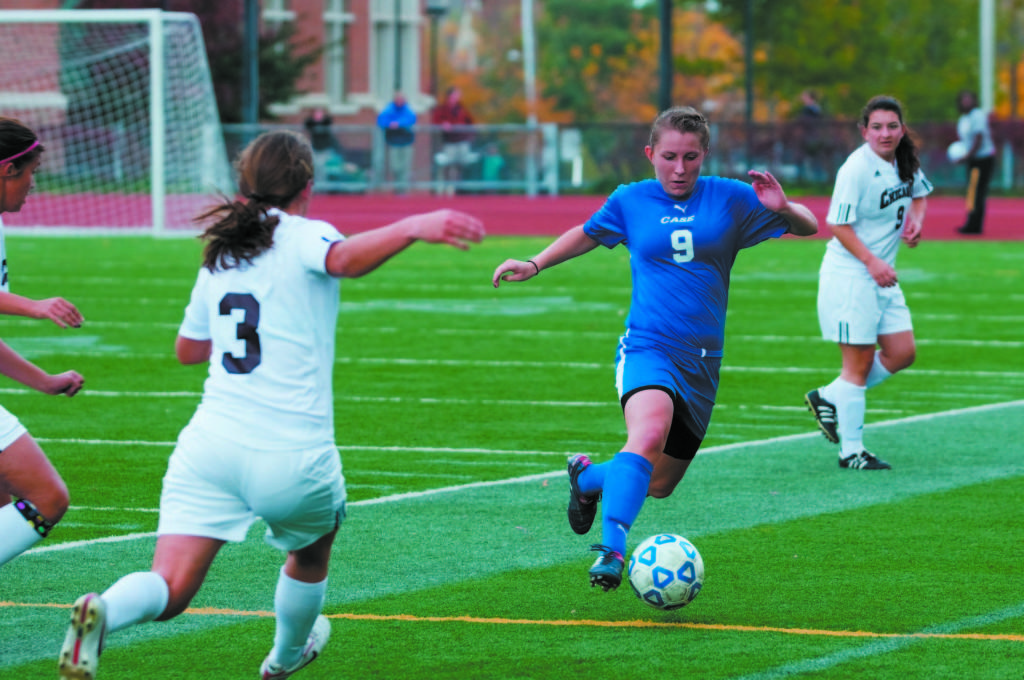 The women’s soccer 2010 season came to a close this weekend in a disappointing loss on the road to the University of Rochester in a University Athletic Association matchup. The Spartans came out with a high-energy lever when the whistle blew. Just ten minutes into the game freshman forward Leah Levey scored the first goal of the game and her sixth of the season to give the Spartans a 1-0 leg up. The Spartans held the lead throughout the remainder of the first half and had seven shots to Rochester’s one lone shot.

Though the Spartans clearly dominated the first half, Rochester got a lucky goal less than ten minutes into the second half. After a Spartan foul, Rochester’s Ellen Coleman took and scored a penalty kick as her fifteenth goal of the season. After Rochester’s lucky break, the game was tied 1-1 and Rochester was back in contention. After a series of corner kicks and shots, Rochester scored again just five minutes later, in the 58th minute. Kathryn Rowe scored off of a corner kick in the box. The Spartans were unable to score again in the match. The loss dropped the Spartan’s UAA conference record to 1-6 and the final season record to 9-8-1 overall.

Though the Spartans didn’t quite live up to their expectations in conference play – last year they narrowly missed making it to the post-season – their nine victories of the season still signify one of the best records in school and program history.

The next year for the Spartans looks promising considering the starting lineup dynamic between seasoned veterans and the new talent of this year’s freshman class. However, the end of this 2010 season also marks the departure of an influential senior class. These seniors were freshman when head coach Tiff Crooks joined the program and took it in a new direction, and they have been a monumental part of improving CWRU’s women’s soccer program to what it is today.

Amy Baumann came in as a freshman and quickly established herself as a leader on and off the field, and also secured a starting position in the central midfield. In 2008 and 2009 she earned All-Academic UAA honors and in 2009 earned an All-UAA Honorable Mention.

Crooks says of Baumann, “She is one of the most naturally gifted leaders we’ve had. She has been so very strong tactically on the field and a key performer throughout her career.”

Senior midfielder Cecelia Fusco has been a consistent play-maker on the field as well, and is, as Crooks says, “one of the most naturally gifted athletes in the program. As a player, she is creative and dynamic.”

Fusco also earned UAA All-Academic honors last season. Frannie Hogan is a “team and fan favorite” and came up big this year to score three important goals – one to win the game. Crooks praises her work rate and determination, calling her “exceptional.” She also earned All- Academic UAA honors in 2008 and 2009.

Annie Altenau “has great tactical awareness” according to Crooks, “she’s usually one of the first to solve a tactical game in training, and the best at time management. What she was able to balance this year with graduating early and being fully engaged in her nursing intensives was amazing.”

Stephanie Chinchen, who joined the program for the 2008 season, is a “constant motivator of all her teammates and the jokester of her class. She is definitely the most improved player on the team.” According to Crooks, Chinchen scored the most memorable goal of her time at Case since 2007.

Finally, senior Megan Link has been committed to the team this season despite challenges due to an injury. “Her resilience is unbelievable. She’s been unable to come back from last year’s knee surgery but has been at everything and still finds a way to impact her teammates,” Crooks says, “I can’t sum up how important she has been.”

I think it’s clear that the Spartans are saying goodbye to a dynamic senior class that commit themselves to their teammates both on the field and off the field. Crook’s attachment to this bunch of seniors is also apparent; as she puts it so clearly, “I simply adore them.” There is no doubt they will be missed, but there is also no doubt that they have made a long-lasting impact on the program.